One of the great joys of being Anouar Brahem fan is that you can always regard any upcoming album of his as a “must buy” no matter what instrumentalists he’s collaborating with. If I knew his next album was a collaboration with a bagpipe player, a trombonist, and a beat-box player – I’d still buy it. Brahem is devoted to detailing a beautiful melody with precision and contemplation, and the players on his albums all use minimal instrumentation to maximum effect. Modulation is never taken for modulation’s sake – which is not something that can be said for many, many jazz artists.

On “The Astounding Eyes of Rita”, Brahem and his group continue developing a music firmly in between jazz and chamber music. Perhaps this album is a bit more jazz than chamber music – unlike the last two albums, but like “Thimar”… and yet, this album feels very different from “Thimar” in that it has an even stronger ensemble feel than that album. Let me just walk you through this beautiful album.

The opening track, “The Lover of Beirut,” is a langorous track beginning and ending with what I can only describe as a chime on the guitar. The oud and clarinet play in unison, tracing out a typical Brahem Easternish melody with exquisite care. “Dance with Waves” is a short jazz track making good use of the bass player, and a perfect blend of the sanguine and the phlegmatic moods that characterize this album. “Stopover at Djibouti” is one of my favorite pieces. It’s very light on its feet and its simple but quick tune is so sunny that it feels miles away from most everything on “Le Pas du Chat Noir”. There is a moment in the middle when the clarinet cuts out, the opening guitar chime returns, and the clarinet softly returns in a high register with a delicate phrase – it is true beauty. “The Astounding Eyes of Rita” (the title track) starts with a pensive oud solo (accompanied with minimal wordless vocals by Brahem), but then shifts to a sauntering quasi-bossa nova rhythm (Rita?). It is a more melancholic piece but exhibits the virtuosity and emotional maturity we’ve come to expect from Brahem and his players. “Galilee Mon Amour” is likewise a rather melancholy piece built on an unusual rhythm and some great drum playing, not as interesting to me as the title track, but still excellent, interesting music.

“Waking State” is a slow piece with some beautiful oud playing (in unison with clarinet at times) over held tones from the guitar (clarinet later). Thinking about the title of the song, I’m left with the impression of the pondering you might do when you wake up but you don’t have to be anywhere very soon. “For No Apparent Reason” returns the album to a sanguine mood with some clever interactive playing among the musicians. (by Robert Burns) 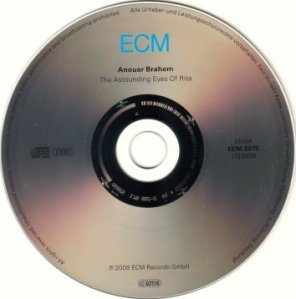