Charles Aznavour is perhaps the best-known French music hall entertainer in the world — renowned the world over for the bittersweet love songs he has written and sung, which seem to embody the essence of French popular song, and also for his appearances on screen in such wildly divergent fare as Shoot the Piano Player, Candy, and The Tin Drum. His status as the quintessential French popular culture icon is something of an irony for a man who identifies himself most closely with his Armenian heritage. Born Shahnour Varenagh Aznavourian, his French roots derive from the fact that his family fled the threat of massacre by the Turks — his father was a singer and sometime-restauranteur, while his mother was an actress and part-time seamstress. His father’s singing, done in a notably impassioned style, heavily influenced Aznavour’s approach to singing as a boy. Although he had a voracious appetite for music, he also had a serious impediment growing up, in the form of a paralyzed vocal cord that gave his voice a raspy quality. He channeled some of his energy into theater, making both his stage and screen debuts at age nine, in 1933, in the theater piece Un Bon Petite Diable and in the film La Guerre des Gosses. As an adolescent, he danced in nightclubs and sold newspapers, as well as touring with theatrical companies, and he wrote a nightclub act in partnership with Pierre Roche — Aznavour wrote the lyrics to their songs and it was through that material that he began his singing career. Early on, he learned to overcome his fears about his vocal limitations, in part with help from singing legend Edith Piaf, for whom he worked as a chauffeur, among other capacities; with her help, he developed a style that suited his capabilities and played to his strengths and also continued writing songs in earnest, some of which were performed by Piaf.

His success came very slowly, however. Aznavour at first found some difficulty being accepted as a composer in France or anywhere else. His compositions, although considered tame by any modern standard, were regarded as too risqué for French radio and were banned from the airwaves for a decade or more, from the late ’40s through the end of the 1950s; American publishers seemed equally reticent about them, as he discovered on a visit to New York in 1948. That trip did yield his first performing engagement in the city, however, at the Cafe Society Downtown in Greenwich Village. For the next decade, Aznavour made his living as a performer in second-tier clubs and middle- or bottom-of-the-bill berths on three continents. His mix of daringly original and frank love songs, coupled with a limited but very expressive singing style, left audiences somewhat bewildered at first.

His breakthrough came in 1956, during a vaudeville engagement in Casablanca, where the audience reaction was so positive that Aznavour was moved to headliner status. After this, it became easier for the singer to find better engagements in France; by 1958 he even had a recording contract. He made his screen debut that same year in a dramatic role, playing an epileptic in George Franju’s La Tete Contre les Muirs. He also composed music for Alex Joff’s Du Rififi Chez Les Femmes in 1958; from there, he moved on to bigger roles in better movies, including Jean Cocteau’s Testament of Orpheus and Francois Truffaut’s Shoot the Piano Player. The latter movie turned Aznavour into a screen star in France and opened the way for his breakthrough in America. He sang at Carnegie Hall in the early ’60s and followed this up in 1965 with a one-man show, The World of Charles Aznavour, at the Ambassador Hotel in New York, which drew rave notices from audiences and critics alike. By that time, the once-struggling singer had secured his first American LP release with the similarly titled album The World of Charles Aznavour on Reprise Records, the label founded and run by Frank Sinatra. (by Bruce Eder)

If you listen to this 10 inch LP you´ll know why Charles Aznavour is the best-known French music hall entertainer in the world. We all should discover the exciting world of his music ! 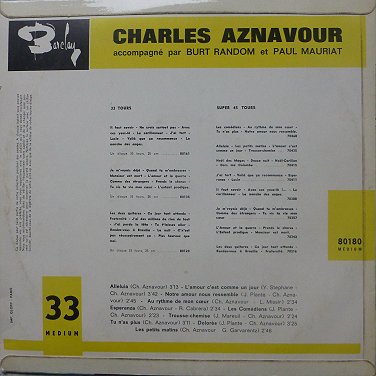 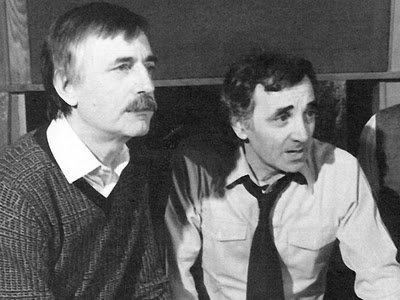 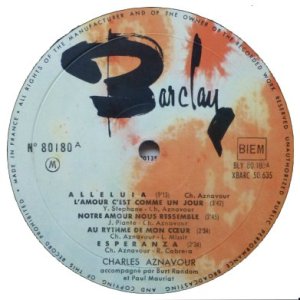