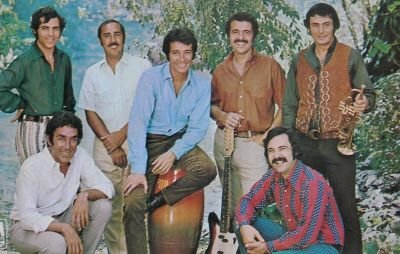 One number, a Sol Lake tune called “The Mexican Shuffle”, was reworked for a TV ad for a brand of chewing gum, and styled “The Teaberry Shuffle”. Bert Kaempfert, author of several songs covered by the Brass, returned the favor by issuing a cover of “The Mexican Shuffle”. The number called “El Presidente”, was a reorchestration of Sol Lake’s “Winds of Barcelona”, which had appeared on Volume 2.
The cover features Alpert and perennial HATB model Sandra Moss at the Patio del Moro apartment complex in West Hollywood.

Herb Alpert was still using an array of SoCal studio all-stars as his Tijuana Brass when South of the Border (1964) began to restore the combo’s good name after the modest Herb Alpert’s Tijuana Brass, Vol. 2 (1963) failed to ignite a fire in listener’s ears. Alpert later commented that the Sol Lake composition “Mexican Shuffle” “opened a new door for me.” That passageway meant the loss of the Tijuana Brass’ practically forced mariachi style and the rise of Alpert’s approach in arranging familiar melodies in fresh, creative settings. Nowhere would this stylistic progression be as pronounced as in the horn-driven updates of several then-concurrent chart hits. For instance, the mod sonic wrinkle in “Girl from Ipanema” emits a darkness veiled in mystery, directly contrasting the light buoyancy of “Hello! Dolly” or the footloose feel of the Beatles’ “All My Loving.” They seamlessly fit in with Sol Lake’s “Salud, Amor y Dinero” and a cover of Julius Wechter’s playful, midtempo “Up Cherry Street” — which Wechter’s own Baja Marimba Band had just recorded for their 1964 self-titled debut.

The ballads “I’ve Grown Accustomed to Her Face,” “Angelito,” and “Adios, Mi Corazon” provide contrasts with Alpert’s sensitive scores never seeming maudlin or unnecessarily over the top. If the regal “El Presidente” sounds particularly familiar, it may well be due to Alpert’s slight renovation of the “Winds of Barcelona” from the Tijuana Brass’ previous effort, the less than impressive Herb Alpert’s Tijuana Brass, Vol. 2. It was renamed “El Presidente,” presumably to honor the then-recent memory of the slain U.S. leader John Fitzgerald Kennedy. (by Lindsay Planer)

In other word: Another pretty good album by Herb Alpert ! My copy was especially produced for the Spanisch record market … 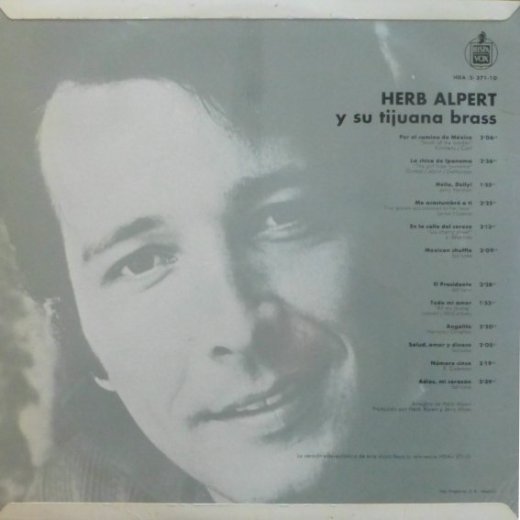 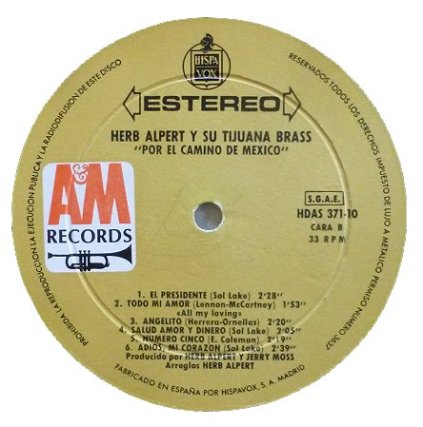 The original US front cover: