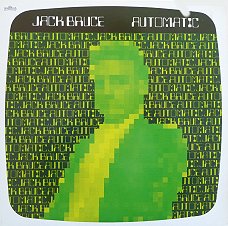 Automatic is the eighth studio album by Scottish musician Jack Bruce, released in January 1983. It makes heavy use of the Fairlight CMI digital sampling synthesiser and Bruce is the sole performer. The album was originally only released in Germany, on the Intercord label. (by wikipedia)

Jack Bruce’s Automatic, recorded and originally released only in Germany in 1983, is an interesting LP and one that bears the distinction of being the final Bruce catalog album to be released on compact disc. It was recorded in the aftermath of a series of collaborative projects that included albums with Robin Trower, the Jan Hammer Group, and Rocket 88; the dreadful Jack Bruce and Friends album I’ve Always Wanted to Do This with Clem Clemson, Billy Cobham, and David Sancious; the beginning of his stellar collaboration with percussionist, conceptualist, and producer Kip Hanrahan; and a tour with his road band of Clemson, Bruce Gary, and Ronnie Leahy. The story is that Bruce became enamored with the Fairlight. The Fairlight was a keyboard and computer rolled into one, and was already being employed by numerous artists as a way of filling out their recordings without having to pay studio players. It was an ’80s phenomenon that is to be blamed for ruining many a record, though it is also to be credited with at least one classic: Ministry’s Twitch, produced by Adrian Sherwood, was recorded using only the Fairlight. 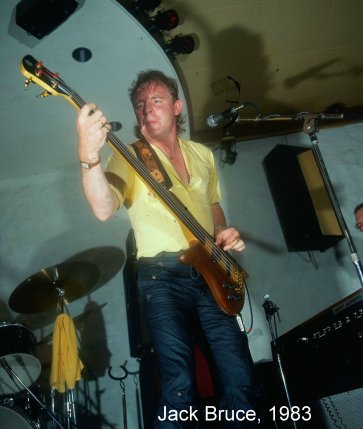 The end results on Bruce’s album, however, aren’t quite so stellar. He used the device in the extreme: he played bass, harmonica, and cello and used the Fairlight for everything else. First, the positive: musically, the songs hold up. Bruce’s ballads, such as “New World,” “Traveling Child,” and “Encore” are as fine and tight as anything he’d written. The album’s opener, the reggae-influenced soul number “Make Love,” might have been a hit with different production. Bruce’s voice was in fantastic shape on the set as well, cementing his rep as one of the most instantly recognizable voices in rock. Then there’s the rest. “E. Boogie” is a dreadful attempt at computerized urban funk and sounds like a Cerrone reject. “Swarm” is perhaps what Bruce conceived of as a jazz tune (something he’s more than capable of writing with real sophistication). Because of the production, it’s simply a mess, so dense one can’t make out just what it is supposed to be. The closing tune is a blues jam with Bruce accompanying himself only on the harmonica. Though extremely brief, it feels like a breath of fresh air after the rest of Automatic. Bruce himself admits in the liners that “I’m not sure of the merits of the project itself 25 years on, but I do see it as an attempt to do something very different and worthwhile.” And that’s the caveat: this one is perhaps for those who follow Bruce’s recording career rather obsessively and can see it for what it is — a rather interesting if utterly failed experiment. (by Thom Jurek) 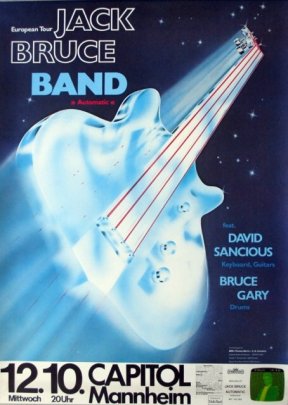 Jack Bruce, mastermusician, composer, vocalist, made a string of brilliant solo albums in the years after Cream broke up. “Songs For A Tailor”, “Harmony Row”, “Out Of The Storm”, masterfully blending hard rock, jazz, powertrio, avantgarde. But after that his soloalbums have been a more uneven affair, mixing the splendid with the more mundane.

One album has always stood out as a masterstroke, “Automatic”. So its certainly in due time this excellent and compelling music is out on CD. Really just Jack and a lot of synths and keyboards and perhaps his strongest collection of songs ever. Bruce has always belonged to the chosen few who can write ballads that’s not clichériden or sentimental, but instead heartgripping and transcendentally beautiful. Here we get a wholesome dose of those gorgous Jack-ballads, like “The Best Is Still To Come” and “Travellin’ Child”.

Some of synth-pads may sound a bit outdated, but as a whole this is really timeless quality music. Showing – in the many details – his great musical scope, incorporating elements of jazz and classical in the proceedings. Ranging from fiery soul in “Make Love (pt.II)” to the rather wacky avantgarde of “The Swarm”. All of it sung with his trademark golden voice. 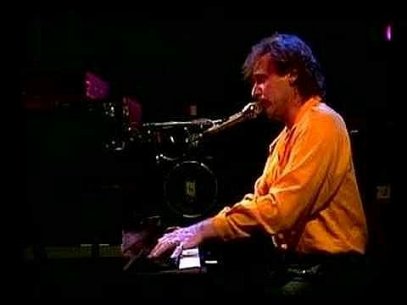 And perhaps the finest bunch of lyrics ever from long time collaborator Pete Brown. Often hinting at the transcendental and the spiritual. (by Bodhi Heeren)

“Automatic Pilot” ends the album just Jack and his harmonica barking out
a bleak future.

An unusual, but very satisfying album by the one and onyl Jack Bruce ! 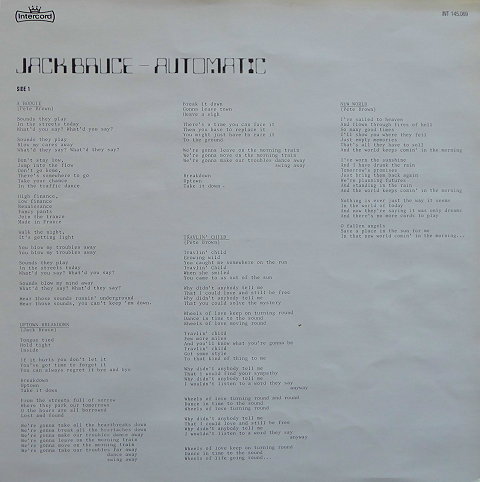 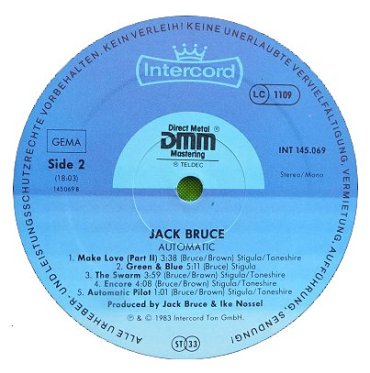