Ssssh is the third studio album by blues rock band Ten Years After, released in 1969. The album charted #20 on the Billboard 200 and #4 on the UK charts. (by wikipedia)

Ssssh was Ten Years After’s new release at the time of their incendiary performance at the Woodstock Festival in August, 1969. As a result, it was their first hit album in the U.S., peaking at number 20 in September of that year. This recording is a primer of British blues-rock of the era, showcasing Alvin Lee’s guitar pyrotechnics and the band’s propulsive rhythm section. As with most of TYA’s work, the lyrics were throwaways, but the music was hot. Featured is a lengthy cover of Sonny Boy Williamson’s “Good Morning Little Schoolgirl,” with reworked lyrics leaving little doubt as to what the singer had in mind for the title character. Also included was a 12-bar blues song with the ultimate generic blues title “I Woke Up This Morning.” Ssssh marked the beginning of the band’s two-year run of popularity on the U.S. album charts and in the underground FM-radio scene. (by Jim Newsom)

Ssssh (1969), the first of the trilogy of TYA’s LPs of their most fruitful period 1969-70 (i.e. Ssssh, Cricklewood Green, and Watt). Although quite short in total timing (33:35 min), it is laden with an incredible amount of blues-rock energy, distilled to the bones. High voltage, 100 carat gem. This very record was the basis for the future genuine, unmistakable sound of TYA. On the bluesy web, the power of 5 instruments is presented – Alvin Lee’s vocal (although with a limited scale, vigorous enough with lots of rock and blues feeling, and time-to-time, in the more balladic things, even somewhat soft and hollow, in contrast to its unbelievable strength in the shouting and screaming parts), Alvin’s virtuoso rock guitar playing legato in an extreme speed, releasing tons of energy all over, Leo Lyons’s jerky style of bass-guitar playing (probably he was the one closest to jazz among the foursome, his style being quite different to all other bass-guitar players in the big R`n’R bands). Then comes the superb keyboard playing of Chick Churchill, although inconspicuous, yet perfectly fitting to the sound. His classical rock & blues way of handling piano or Hammond organ is full of feeling. And last but not least, the vigorous, robust, but also highly technical drumming of Alvin’s brother, Ric, belongs to the same super class as e.g. that of Led Zep’s John Bonham or The Who’s Keith Moon.

It was 1969, the year of gross, prolonged, nearly jazzy improvisations and bulky soloing in rock, and also, of experimenting with the new sounds available in the studios of the time. All of this is notable on Ssssh. But (say, in contrast to the long improvisations of e.g. Cream or Grateful Dead of those years), on Ssssh, everything is highly controlled and subsides to the balanced sound and structure of the compositions. This is especially prominent on tracks 4 and 8 – the pieces that have been since quite regularly climaxes of TYA’s live shows (even after Alvin’s parting the group) – of course, with more abundant improvisations than on the studio-recorded Ssssh. These 2 compositions may serve as typical examples of TYA’s songs, with an opening guitar or bass-guitar riff (maybe we would describe it as hard rock if performed by Black Sabbath), with the main theme gradually dissolving into various improvisations with up going tempo and exaltation. Also typical for TYA, a country blues-like style song appears (track 2), as well as the boogie (track 7). 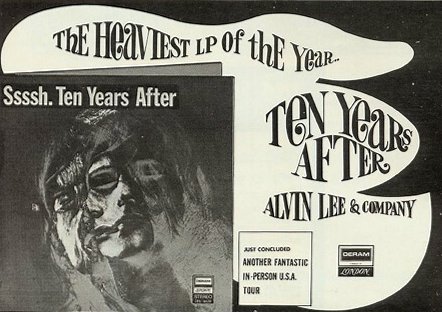 As the next typical feature of this and future records, some low- (or rather moderate-) tempo things are included (tracks 5 and 6), making the record pleasantly variable in style. Although track 5 starts like a balladic love song, it ends up in high tempo with full rock and blues power. Also, some new experimental sounds appear on Ssssh, but again, they are functionally built in the songs, without disturbing (this is in contrast with TYA’s previous album, Stonedhenge). Well, it is hard to describe. Better go into this – definitely if you like rock & blues of the turn of 60’s/70’s. No way you might be disappointed – Ssssh is a real gem. (by Jiri Schwarz)

In other words: One of the finest Ten Years After albums ! 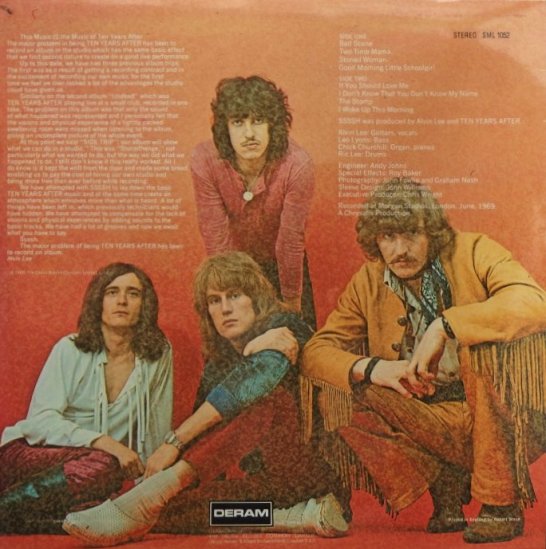 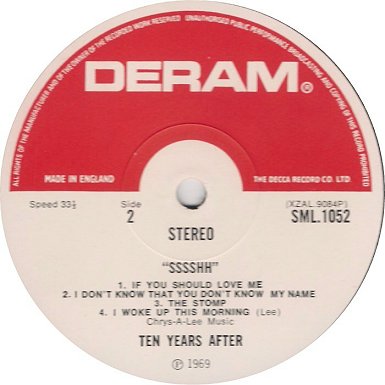