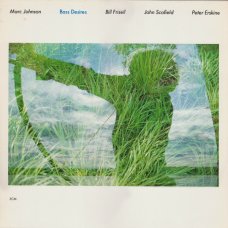 Bass Desires is a 1985 studio album by jazz bassist Marc Johnson released on the ECM label.

The pairing of electric guitarists Bill Frisell and John Scofield had to be one of the most auspicious since John McLaughlin and Carlos Santana. Acoustic bassist Marc Johnson’s stroke of genius in bringing the two together on Bass Desires resulted in a sound that demonstrated both compatibility between the guitarists and the distinctiveness of the two when heard in combination. Add drummer Peter Erskine and you had a bona fide supergroup, albeit in retrospect a short-lived one, before Frisell and Scofield would establish their own substantial careers as leaders. The guitarists revealed symmetry, spaciousness, and a soaring stance, buoyed by the simplicity of their rhythm mates. This is immediately achieved on the introductory track, “Samurai Hee-Haw,” as hummable, head-swimming, and memorable a melody as there ever has been, and a definite signature sound. A perfect country & eastern fusion, the guitarists lope along on wafting white clouds of resonant twang, singing to themselves while also playing stinging notes, supported by the insistent two-note funk of Johnson and the rolling thunder of Erskine.

The title track is a one-note ostinato from the bassist with a popping, driven drum rhythm and the guitars more unified in their lines, but broadening their individualistic voices. The light reggae funk of “Mojo Highway” sounds more conversational and jam-like, while “Thanks Again” is a relaxed, unforced waltz, again eschewing Asian-Missouri folkloric alchemy fired by Frisell’s wah-wah and Scofield’s stairstep strums. Ethereal and effusive sky church inflections lead to loose associations, especially from Frisell’s moon-walking guitar synthesizer on “A Wishing Doll.” There are three covers: a take on Elmer Bernstein’s “A Wishing Doll;” “Resolution,” the second movement from John Coltrane’s A Love Supreme suite, with a more spiky bass and spacy lead melody played only once; and the standard “Black Is the Color of My True Love’s Hair,” floating and eerie, held together by silk and lace threads. One of two Bass Desires albums, this debut has stood the test of time — it is priceless, timeless, and still far from being dated. (by Michael G. Nastos) 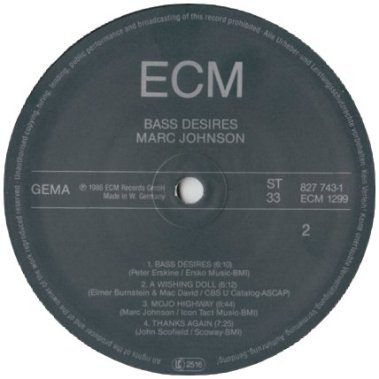