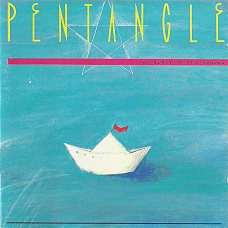 So Early in the Spring is the ninth album by Pentangle.

Pentangle had become a bit like Steeleye Span by the 1990s, a legacy from which the key members, however high they might fly in their solo careers, would never entirely escape. Hence, Bert Jansch and Jacqui McShee cut this record with a new lineup featuring ex-Lindisfarne co-founder Rod Clements (electric guitar, mandolin), ex-Fairport Convention Gerry Conway (drums), and Nigel Portman-Smith (bass, keyboards). McShee’s voice has the purity, if not the power and range, that she displayed on the band’s classic sides, and Jansch and company can play as well as ever. And they still have an original approach to the folk repertory — “So Early In the Spring” is offered in a tempo that makes it lope along while McShee’s singing soars above it. The only drawback on the harder-rocking sides is Conway’s drumming, which is too prominent. McShee’s performance on “The Blacksmith” is laced with poignancy as well as virtuosity, and Jansch sings superbly on “Reynardine” — and when their voices join together on the last verse, the listener’s spine may tingle in pleasure.

Clements takes a fine, rippling solo on “Bramble Briar”; the group shows off its acoustic side on the cautionary folk number “Lassie Gathering Nuts”; and “Gaea” presents a more modern, pop-jazz sound, which was very much a part of the original group’s orientation. It would be nice to report that the epic “The Baron of Brackley” ended the album well, but it lacks enough invention to sustain its eight-minute length. Tony Roberts guests on flute and whistle for several tracks, adding another sound to this welcome mix of folk-rock. (by Bruce Eder)