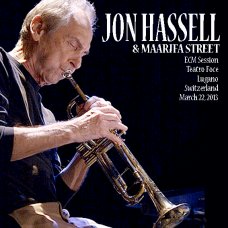 Composer/trumpeter Jon Hassell (born March 22, 1937) is the visionary creator of a style of music he describes as Fourth World, a mysterious, unique hybrid of music both ancient and digital, composed and improvised, Eastern and Western. After composition studies and university degrees in the USA, he went to Europe to study electronic and serial music with Karlheinz Stockhausen. Several years later, he returned to New York where his first recordings were made with minimalist masters La Monte Young and Terry Riley, through whom he met the Hindustani raga master, Pandit Pran Nath, and embarked on a lifelong quest to transmute his teacher’s Kirana vocal mastery into a new trumpet sound and style. In the last two decades, he has recorded albums which have, over the years, become so widely appropriated that many of their innovations have become woven anonymously into the texture of contemporary music high and low.

Contemporary jazz would not be the same without Jon Hassell. The genius composer’s Fourth World genre, the union between traditions and modern technology, which he has

cultivated since the 1980s, finds its place in the fourth dimension. Trumpetist Hassell’s unique playing style has inspired countless artists in the realms of ambient, progressive rock and jazz. The seasoned musician has collaborated, for instance, with Brian Eno, Peter Gabriel and Kronos Quartet. Hassell’s work can also be heard on numerous film soundtracks.

The pioneer of digital processing and sample technique released an album entitled Maarifa Street/Magic realism 2 (Label Bleu) in 2005. The album comprises concert recordings from 2000-2003; the raw material was then reworked layer by layer by Hassell and some parts were re-performed. A critic described this exciting collage as “ambient voodoo jazz”. When working on the album, Hassell put together a new group, Maarifa Street. On their 2005 tour the ensemble astonished their audiences. As reinforcement the Happening gig features Eivind Aarset on the guitar, one of the most outstanding musicians in the field of European nu-jazz.

Thanks to original uploaders LEWOJAZZ and FBAUER; and to davidraphael for keeping the show alive at Dime.