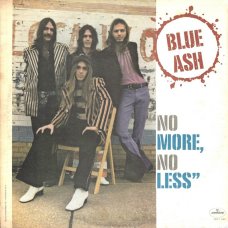 Blue Ash is a United States band, formed in Ohio in the summer of 1969 by bassist Frank Secich & vocalist Jim Kendzor. Guitarist Bill Yendrek and drummer David Evans were recruited later that summer.

The band debuted at “The Freak Out”, a club in Youngstown, OH on October 3, 1969. They gained a loyal following playing an endless stream of one-nighters over that year. In October 1970, Bill Yendrek, was replaced by guitarist/songwriter Bill “Cupid” Bartolin.

Blue Ash continued playing 250-300 dates a year throughout Pennsylvania, New York, Ohio and West Virginia, while the songwriting team Frank Secich and Bill Bartolin accumulated an enormous amount of original material. In June 1972, Blue Ash signed a production contract with Peppermint Productions of Youngstown and started recording and sending out demos. In late 1972, they were signed to Mercury Records by A&R man Paul Nelson. Their first album No More, No Less was released in May 1973 and received rave reviews in the rock press. It is considered a power pop classic, and is regarded as highly collectible among fans of that genre (it was finally released on CD on the Collectors’ Choice label in September 2008). Blue Ash toured and opened for such acts as the Stooges, Bob Seger, Aerosmith, Ted Nugent and more but for lack of sales they were dropped by Mercury Records in May 1974. 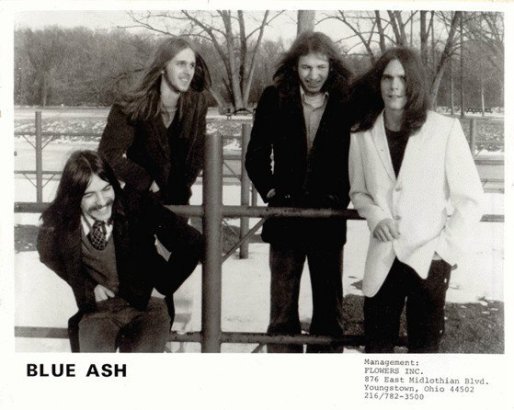 Blue Ash continued to play live and record, adding drummer Jeff Rozniata who replaced David Evans in 1974. They were signed to a singles deal with Playboy Records in 1977. The first single, “Look At You Now” became a regional hit in Texas, Oklahoma, Louisiana and Mississippi, as well as in Ohio and Pennsylvania. Playboy then offered an album deal. The LP Front Page News was recorded in Los Angeles in August 1977 and released in October of that year. It was selling well, but in early 1978 Playboy International pulled the plug on Playboy Records and Blue Ash was once again without a label. They called it quits in 1979.

A few audience-recorded live tapes of the band exist (including one of the original lineup from January 31, 1974 at the Packard Music Hall in Warren, OH) but are of generally poor recording quality. Other tapes recorded by a fan who followed Blue Ash to many of their gigs are rumored to exist, but have yet to surface on the collectors circuit.

In the summer of 2003 original members Frank Secich, David Evans, Bill Bartolin and Jim Kendzor got together privately in Ohio to play once again and decided to reform the band. On November 8 they played the International Pop Overthrow at the Khyber Pass in Philadelphia.

In the late 1990s, renewed interest toward the band was given a boost as a large cache of unreleased Blue Ash recordings fell into circulation amongst collectors. In the summer of 2004 an official release of that material—a two CD retrospective called “Around Again”—was released on Not Lame Records. It contains 44 songs of unreleased material spanning their career.

For their “reunion” gigs from 2003–2009, Frank Secich moved from bass guitar to rhythm guitar, and former members Brian Wingrove (piano) and Jeff Rozniata (drums) completed the band along with Bobby Darke (bass).

On October 3, 2009, guitarist Bill “Cupid” Bartolin died from complications of cancer, thus bringing to a sad end the story of Blue Ash.

Frank Secich is now a member of Deadbeat Poets, who have released three critically acclaimed CDs: Notes From The Underground (2007), Circustown (2010) and Youngstown Vortex Sutra in 2011.

In the late 1990s, Jim Kendzor’s nephew, guitarist Leonard Crist, and Bill “Cupid” Bartolin’s son, drummer Sean Bartolin, formed Cork, a short-lived band based out of Youngstown while Crist played in the Youngstown indie rock bands Savage Pastry, Isabella the Brave, You Are The War That I Want and Abortopotamus Rex.

No More, No Less is the first album by the Youngstown, Ohio band Blue Ash, released in 1973 on Mercury Records SRM1-666. (see 1973 in music). The album is composed mostly of originals with two covers, “Dusty Old Fairgrounds” by Bob Dylan and “Any Time at All” by The Beatles. The album remained out of print for many years until re-released on CD by Collector’s Choice Music in late 2008. (by wikipedia) 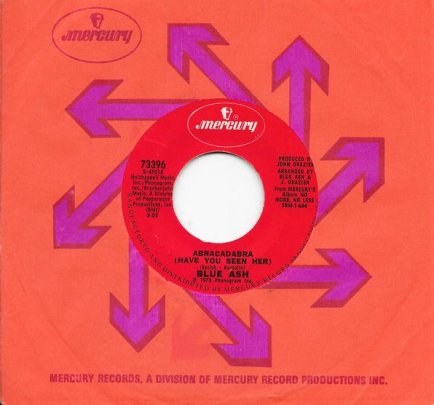 Hailing from Ohio just like the Raspberries, Blue Ash are the great forgotten power pop band of the early ’70s. Actually, “forgotten” may be too strong a word, for any power pop fan worth their salt knows of Blue Ash even if they’ve never to score either of their two LPs, whether in their original pressing or traded on cassette or CD-R. They were known as one of the key early power pop bands, standing alongside the Raspberries and Badfinger in how they drew equally from the Beatles and the Who. If anything, Blue Ash leaned on that Who influence harder than the Raspberries, rocking a vigor rarely heard in power pop and also opening themselves up to the lyrical vistas of Bob Dylan by covering the rarity “Dusty Old Fairgrounds,” a move rarely made by power poppers. All this indicates that Blue Ash were a rock band first and foremost, placing the sheer rush of sound over hooks, something that a lot of their progeny never did. That’s what gives their debut No More No Less — finally reissued by Collectors Choice in 2008, a full 35 years after its release — such a punch: they are one of the few groups that truly put some power in their pop. 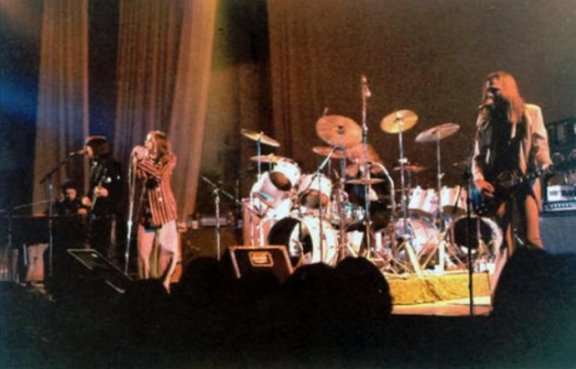 This much is evident by the raucous album-opener “Abracadabra (Have You Seen Her),” a song with all the melodic rush of “Go All the Way” but leaner and meaner. Not all of the album keeps up at this same furious pace, as the guitars jangle as much as they roar and the group occasionally dips into a loping country-rock groove — not on the Dylan cover, which again sounds a bit like the Who, but on “Just Another Game” — and they do get sunbleached and mellow on “What More Can I Do.” But most of No More No Less filters old-time rock & roll (the big-time boogie “Let There Be Rock”) and ’60s guitar pop (“Plain to See” evokes the Searchers, “I Remember a Time” the Byrds, and “Anytime at All” is a Beatles cover) through the outsized amplification of ’70s hard rock. It’s an addictive sound — and one that hinted at the power pop that was to come even if it didn’t directly influence it — and it still carries a mighty punch all these years later. (by Stephen Thomas Erlewine) 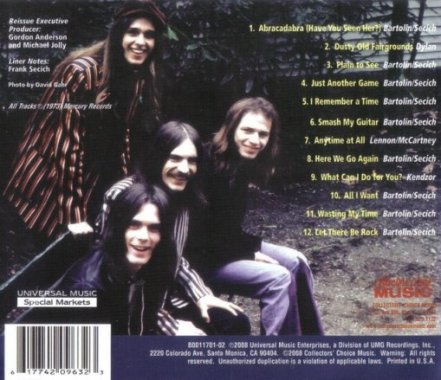 At a time where a lot of bands were going for otherworldly psychedelic ‘mind-crashers’, Marmalade went another direction. They had a very commercial sounding aura about them, and after four failed singles, they finally made the top 10 of the U.K. Charts. Fortunately for them, unlike massive bands like the Small Faces and The Move, Marmalade actually had a top 10 hit in the United States with “Reflections of my Life”, making them a one hit wonder in that country.

What Marmalade captures to do is create commercially sounding pop songs, without going over the top with or sounding too corny (most of the time!) Lead singer Dean Ford really puts them in control with a fantastic voice, and one that is synergistic with the songs themselves. It is too bad that he never never made it big as a solo artist after he left the group in 1974, after doing four albums with them.

As for the songs themselves, lets start with the covers. There is a total of five of them included on here, and I would say three of them were worth recording. Their version of Big Brother & Holding Company’s “A Piece of my Heart” could have made it big itself. It perfectly encapsulates the spirit of the 60’s. Look up some live BBC songs on Youtube. There are many songs there that have that same feeling as “Piece of my Heart”. It’s easy to get lost in a magical rush of serotonin when Ford sings on this one. The Bob Dylan cover of “I Shall Be Released” might not be for everybody, but for a lot of people it will serve as a song you might listen to constantly for months. So smooth, and includes astounding horns that will make you reverse the songs a few times to hear it again. 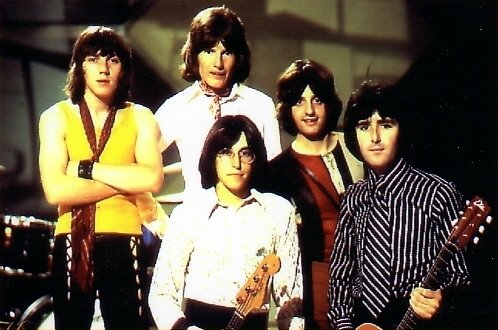 Their cover of “Hey Joe” starts a bit boring for sure, the first verse is a little lazy. However, it picks up speed quickly and the last 2/3 of the song is definitely worth it. Their version of The Lovin’ Spoonful’s “Summer in the City” is a song that I can take or leave it…Not bad, but not exceptional either. Now, as for the originals, you will mostly be happy with;

There are two particularly psychedelic songs on the album, one of them being the incredible “I See The Rain”, reminiscent of Jimi Hendrix. Ironically, Hendrix stated that “I See The Rain” was the the best song of 1967 for him. Crunchy guitar riffs, and parts of “Hey Joe” noticeable throughout it. I have never read or heard anybody say that, but there is a guitar part in this song that is identical to parts of Hendrix’s version. 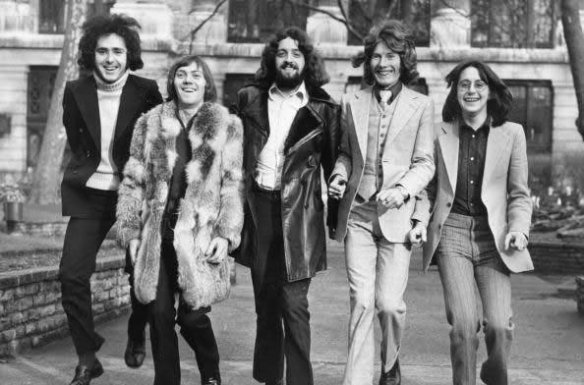 The other psychedelic song, “There ain’t no use in Hangin’ on”, is a groovy piece of musical art that will captivate you with its catchiness and impressive guitar parts by lead guitarist William Junior Campbell. Then, we get to tracks like “Station on Third Avenue” and “Chains” both stylistically different, but they will each get you into music mode. “Chains” especially will grab you, with its Rubber Soul sounding maturity.

The opening track, “Lovin’ Things” got them into the charts. Not a bad song, but the non album single “Wait for me Mary-Anne” is much better and should have replaced “Lovin’ Thing”. However “Lovin Things” did get them their first hit in the UK, peaking at number six.

I would also recommend their follow up album, Reflections of the Marmalade, and 1974’s Our House is Rocking which features a much harder sound from them. If you enjoy pop, I would totally advise you check this album out. Not perfect by any means, but there are enough songs on here by this Scottish band that should make it on your on your miscellaneous playlists. (by Matt Kessler)