It’s quite impressive knowing Passport as they were very productive in generating albums and this “Running in Real Time” was their 14th studio album since their first inception in 1971. Many have considered this Germany-based band in comparison with its American counterpart Weather Report eventhough the music is not quite the same. This release is quite surprise to me as it features two kind of music: the original root of Passport with its jazz-rock fusion style with many saxophone work and those with vocals where the music tend to be R&B instead of jazz.

The opening track “At Large” demonstrates the original root of Passport in jazz-rock fusion style featuring sax solo combined nicely with guitar work laid over jazzy rhythm section. The next track “Auyrin” is a slow speed jazzy tunes with sax as main melody backed with solid basslines. There is also nice guitar solo right after sax. These two opening tracks resembles the original style of Passport music. “Talisman” is explorative in nature, demonstrating bamboo flute played by the band leader Klaus Doldinger cmbined nicely with vocals as well as excellent percussion by the band’s long serving drummer: Curt Cress. Starting with “Help Me” Passport made an effort to do differently, introducing vocal by Victoria Miles. The music has the kind of R&B style. But of course it’s not a typical R&B you can hear easily at radio station. It’s in fact quite enjoyable.

Overall, I consider this album is a good one especially for those who love jazz-rock fusion but don’t get surprises if you find some kind of R&B music as the vocal enters. Keep on proggin’ ..! (by Gatot) 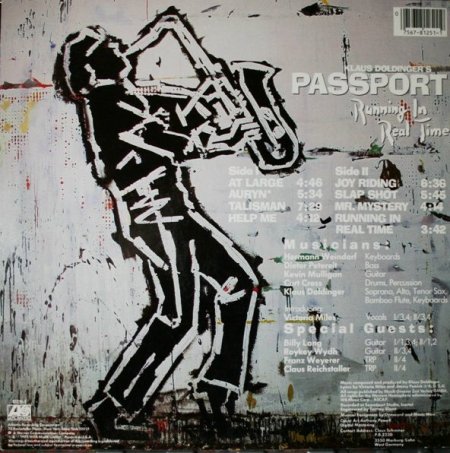