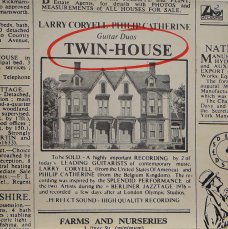 Twin House is an album by American guitarist Larry Coryell and Belgian guitarist Philip Catherine that was released by Atlantic Records in 1977. The duo recorded a second album, Splendid, in 1978. (by wikipedia)

The first of two fine guitar duet recordings with Phillip Catherine. Of the two, Catherine’s sound is more rooted in the tradition of Django Reinhardt and tends to be more introspective. Coryell is his usual incorrigible self; however, Catherine’s presence seemed to inspire more experimentation and intelligent playing on Coryell’s part. As expected, this session will appeal primarily to guitarists — and for good reason, as both players exploit their chops — but it should be noted that the compositions here are quite memorable. Whether soloing over one riff (“Mortgage on Your Soul”), playing the blues (“Twin House”), or showing off (“Airpower”), this is an excellent collaboration and one of Coryell’s most ambitious performances. (by Robert Taylor)

Festival in 1975. Their creative compability, the enthusiasm and mutual understanding inspired me to take them into the Olympic Sound Studios in London to cut “Twin House” in just one day. This was only possible because both the music and the artists were ready to go on.

“Twin House” became one of those rare jazz records well recieved by both the record buying public and the critics. Two years later we were back in the studio recording the “Splendid Sessions”.

Both records were never before released on CD. I am grateful to the artists an my ex-colleagues at WEA, Germany, to let me release what I believe is the best of “Twin House” and “Splendid” on my ACT label. “Mortgage of Your Soul” was taken off and replaced by the previously unreleased track “Dance Dream”.

This record is dedicated to the memory of the great gipsy guitar player Django Reinhardt. (by Siegfried E. Loch, producer)