Supercharge were a 1970s English rock band from Liverpool, founded by singer/saxophonist Albie Donnelly and drummer Dave Irving. They had a number three hit single in Australia with “You’ve Gotta Get Up and Dance” in 1977.

Around 1975, in an attempt to attract a major record label offer, Supercharge began to gig regularly on the London live circuit at venues such as the Hope and Anchor, Islington, the Nashville Rooms, and the Marquee Club. As a result, Supercharge were soon signed by Virgin Records, and with the company’s new record producer, Robert “Mutt” Lange, they had a number three hit in Australia with their 1976 single “You’ve Gotta Get Up and Dance”. Personnel on these recordings also included organist Iain Bradshaw. It was also in Australia that their first album, Local Lads Make Good went gold – resulting in a number of successful major tours with a version of the band that included Les Karski on guitar.

And here´s is their beautiful album called “Local Lads Make Good” and it´s a real crazy mixture between Rhythm & Blues and the Disco Sound from this period … you can´t believe it?

Listen and enjoy this total crazy stuff  … between music and madness …

Herb Alpert (born March 31, 1935) is an American jazz musician most associated with the group variously known as Herb Alpert & the Tijuana Brass, Herb Alpert’s Tijuana Brass, or TJB. Alpert is also a recording industry executive, the “A” of A&M Records, a recording label he and business partner Jerry Moss founded and eventually sold to PolyGram. Alpert also has created abstract expressionist paintings and sculpture over two decades, which are publicly displayed on occasion. Alpert and his wife, Lani Hall, are substantial philanthropists through the operation of the Herb Alpert Foundation.

Warm is a 1969 album by Herb Alpert & the Tijuana Brass. It was the group’s twelfth release and their final album to reach the top 40 on the Billboard albums chart. Warm was a vast departure from all previous Tijuana Brass albums and featured much slower-paced songs leaning more toward a “Brazilian” sound. At this point in his career, Alpert had grown tired of the music the band was playing feeling that it was repetitive and wanted to try a different direction. The opening track “The Sea Is My Soil” was one of the longest songs ever released by the Tijuana Brass running four and a half minutes, while three songs on the album featured lead vocals by Alpert (“Without Her,” “Zazuiera,” and “To Wait For Love”). All three vocal tracks were released as singles. The album received mixed reviews during its initial release but has since become a favorite of many Tijuana Brass fans. (by wikipedia)

Herb Alpert and the Tijuana Brass shed almost all of the dust of Tijuana on this mellow, richly textured album; one reviewer at the time wrote that Alpert seemed to have exchanged bullrings for wedding rings. Lest one think that the TJB came down with a terminal case of the warm fuzzies, though, there are some selections here that sizzle — particularly the old standard “The Continental” — and in terms of arrangements and song selection, the accent falls on Brazil more than on any other TJB album.

Shorty Rogers again was called in to provide voices and orchestrations, but he is more tasteful here than on the Christmas Album, the extreme dynamic range on Harry Nilsson’s “Without Her” notwithstanding. A different take of “To Wait for Love” — the lovely, Bacharach-penned, Alpert-sung follow-up to “This Guy’s in Love with You” from 1968 — is included here, as is the fine single “Zazueira.” Yet Warm was the first non-seasonal TJB album in some time that couldn’t crack the Top 20, for the Brass’ cross-generational appeal was fading fast. (by Richard S. Ginell) 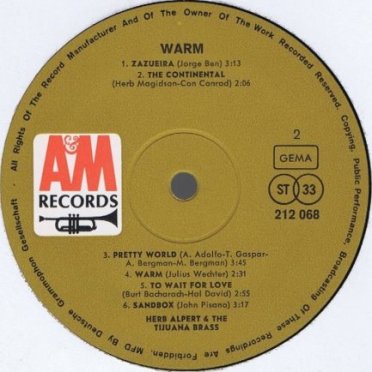