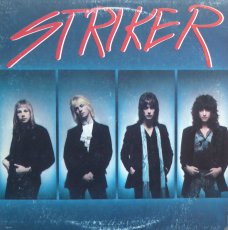 Striker was an American combo from Seattle, Washington, which sole album (self-titled, 1978) largely deserve an official remaster. Until this happens, an obscure bootleg label has released the album on CD, transferred from vinly, yes, but really well done.

Originally known as Randle-Rosburg, the group became Striker in the mid-seventies and was amongst Seattle’s leading hard rock bands of the era. The group was soon signed by a major label (Arista) and recorded & released their debut in 1978.
Their style was pretty ahead of its time, blending classic hard rock with some melodic rock twist that would become popular on FM radio two years after.
Think Legs Diamond, The Babys (John Waite), some of New England, and why not, a bit of Angel (Giuffria). 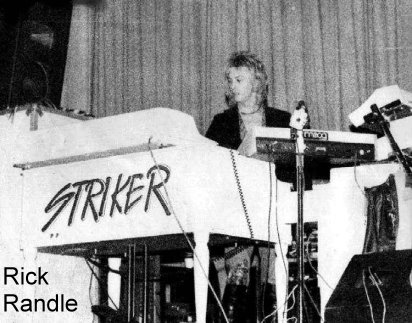 ‘Think About It’ is an extremely contagious opener with a catchy guitar work, smooth vocals and some synth flourishes. ‘Midnight Flyer’ is more midtempo, melodic and with lovely harmony vocals.

Striker add acoustic guitars on the dynamic ‘Wish’, while ‘More Than Enough’ rocks with a fine swaggering riff. Then ‘Hard On Me’ is an edgy blues tinged rocker in the mould of early Legs Diamond. All very ‘American’. 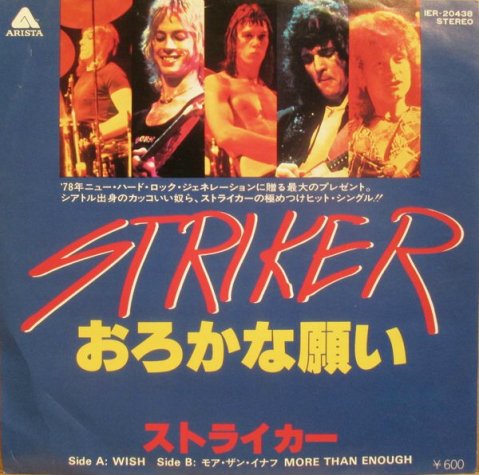 Check carefully the main riff of ‘On My Way’… holy cow, this is exactly the same used later by Def Leppard for their hit ‘Photograph’!
‘Hard On Me’ has some Aerosmith on it, then the style changes completely in the Californian AOR of ‘By Your Side’, a smooth melodic piece that should have been ranked high on FM radio.

‘Running In The Wrong Lane’ returns to rock ‘n roll plenty of swagger complete with a bar-room piano and a hooky chorus, then the album ends ‘We Got The Power’ a rocker bringing to mind the very first Foreigner.

“Striker” is a lost little gem from the late Seventies US scene, and rocks with an energy and melody sure to appeal classic rock fans. Unfortunately, the group disbanded in 1980 with all members joining renowned acts, like vocalist and keyboard / guitar player Rick Randle being involved with the excellent band Bighorn.

Todd Harry Rundgren (born June 22, 1948) is an American multi-instrumentalist, singer, songwriter, and record producer who has performed a diverse range of styles as a solo artist and as a member of the band Utopia. He is known for his sophisticated and often-unorthodox music, his occasionally lavish stage shows, and his later experiments with interactive entertainment. He also produced music videos and was an early adopter and promoter of various computer technologies, such as using the Internet as a means of music distribution in the late 1990s.

A native of Philadelphia, Rundgren began his professional career in the mid 1960s, forming the psychedelic band Nazz in 1967. Two years later, he left Nazz to pursue a solo career and immediately scored his first US top 40 hit with “We Gotta Get You a Woman” (1970). His best-known songs include “Hello It’s Me” and “I Saw the Light” from Something/Anything? (1972), which get frequent air time on classic rock radio stations, and the 1983 single “Bang the Drum All Day”, which is featured in many sports arenas, commercials, and movie trailers. Although lesser known, “Couldn’t I Just Tell You” (1972) was influential to many artists in the power pop genre. His 1973 album A Wizard, a True Star remains an influence on later generations of bedroom musicians. 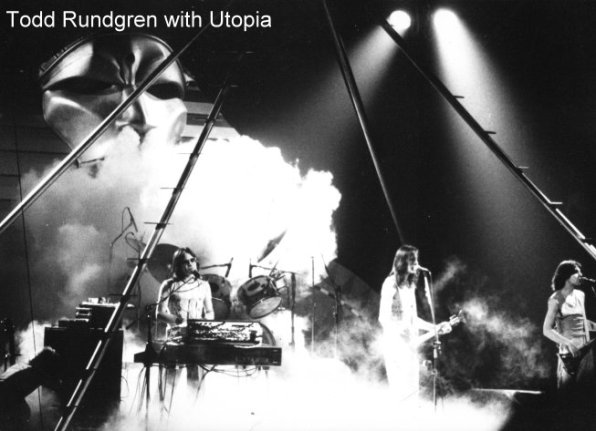 Rundgren is considered a pioneer in the fields of electronic music, progressive rock, music videos, computer software, and Internet music delivery. He organized the first interactive television concert in 1978, designed the first color graphics tablet in 1980, and created the first interactive album, No World Order, in 1994. Additionally, he was one of the first acts to be prominent as both an artist and producer. His notable production credits include Badfinger’s Straight Up (1971), Grand Funk Railroad’s We’re an American Band (1973), the New York Dolls’ New York Dolls (1973), Meat Loaf’s Bat Out of Hell (1977) and XTC’s Skylarking (1986).

Initiation is the sixth album by American musician Todd Rundgren, released May 23, 1975 on Bearsville Records. With this album, Rundgren fully embraced the synthesized prog sound he had begun exploring in more depth in his work with his band Utopia. However, unlike Utopia, in which Rundgren had limited himself to playing guitar, most of the synthesizers on Initiation were played and programmed by Rundgren himself.[not verified in body]

The album’s original inner sleeve included a technical note that stated: “Due to the amount of music on this disc (over one hour), two points must be emphasized. Firstly, if your needle is worn or damaged, it will ruin the disc immediately. Secondly, if the sound does seem not loud enough on your system, try re-recording the music onto tape. By the way, thanks for buying the album.”(by wikipedia)

Returning to solo recording almost immediately after forming Utopia, Todd Rundgren continued with the synth-heavy prog rock he pioneered with Todd Rundgren’s Utopia on Initiation. The differences immediately resonate with “Real Man,” a terrific song that encapsulates not only his newfound fondness for electronics, but also his burgeoning spirituality and his knack for pop craft. “Real Man” is so good, it’s tempting to believe that the remainder of Initiation will follow in the same direction, resulting in an inspired, truly progressive fusion of classic Rundgren and synthesizers. As soon as the second track, an a cappella vocoder opus called “Born to Synthesize,” it’s clear that Rundgren has no intention of following that path, choosing to push the limits of synth technology and recorded music instead of constructing an album. Initiation suffers accordingly. At times, particularly on the first, song-oriented side, it is pretty intriguing, but too often, the results are simply frustrating because it doesn’t go anywhere. That’s particularly true with “A Treatise on Cosmic Fire,” a half-hour “suite” that comprises all of side two and doesn’t really go anywhere, despite hitting many stops along the way. It’s enough to erase the memory of “Real Man,” “Eastern Intrigue” and “Initiation,” the moments where it all comes together on the first half of the record, but another spin of the first side reveals that Rundgren could have made Initiation something special if he had the discipline. (by Stephen Thomas Erlewine)

For fuck sake, this is music I can really dive into.

Side one is just what you expect from an art rock act:
an acapella track, a hard rock number, blue eyed soul,
pop, progressive rock…all covered in layers of synths and sound-effects.

But on side two things gets radical.

From this point on the musician loses control over the synthesizer, reversing their roles (poor Todd) and what’s left are 35 minutes of pure electronic dementia!

First, it’s pretty melodic, sometimes even mellow,
as if the machine was just testing its new toy.
As the track progresses, things only gets weirder and weirder until you think your sound system is damaged.

Towards the end, the opening tune repeats, symbolizing the artist’s triumph.
An overturn has occurred and now peace is restored.

Todd will never give his synth such freedom again. (by Eric_Iozzi)

In other words: A real weird album !

All songs are written by Todd Rundgren