A cult singer, 12-string guitarist, and banjo player of the New York 1960s folk revival, Karen Dalton still remains known to very few, despite counting the likes of Bob Dylan and Fred Neil among her acquaintances. This was partly because she seldom recorded, only making one album in the 1960s — and that didn’t come out until 1969, although she had been known on the Greenwich Village circuit since the beginning of the decade. It was also partly because, unlike other folksingers of the era, she was an interpreter who did not record original material. And it was also because her voice — often compared to Billie Holiday, but with a rural twang — was too strange and inaccessible to pop audiences. Nik Venet, producer of her debut album, went as far as to remark in Goldmine, “She was very much like Billie Holiday. Let me say this, she wasn’t Billie Holiday but she had that phrasing Holiday had and she was a remarkable one-of-a-kind type of thing…. Unfortunately, it’s an acquired taste, you really have to look for the music.”

Dalton grew up in Oklahoma, moving to New York around 1960. Peter Stampfel of the Holy Modal Rounders, who was in her backup band in the early ’70s, points out in his liner notes to the CD reissue of her first album that “she was the only folk singer I ever met with an authentic ‘folk’ background. She came to the folk music scene under her own steam, as opposed to being ‘discovered’ and introduced to it by people already involved in it.” There is a photograph from February 1961 (now printed on the back cover of the It’s So Hard to Tell Who’s Going to Love You the Best reissue) of Dalton singing and playing with Fred Neil and Bob Dylan, the latter of whom was barely known at the time. Unlike her friends she was unable to even capture a recording contract, spending much of the next few years roaming around North America. 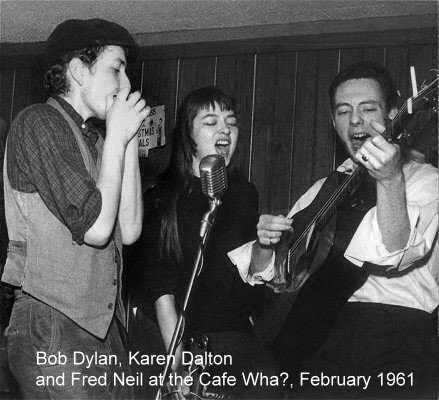 Dalton was not comfortable in the studio, and her Capitol album It’s So Hard to Tell Who’s Going to Love You the Best came about when Nik Venet, who had tried unsuccessfully to record her several times, invited her to a Fred Neil session. He asked her to cut a Neil composition, “Little Bit of Rain,” as a personal favor so he could have it in his private collection; that led to an entire album, recorded in one session, most of the tracks done in one take. Dalton recorded one more album in the early ’70s, produced by Harvey Brooks (who had played on some ’60s Dylan sessions). Done in Bearsville Studios in Woodstock, it, like her debut, had an eclectic assortment of traditional folk tunes, blues, covers of soul hits (“When a Man Loves a Woman,” “How Sweet It Is”), and contemporary numbers by singer/songwriters (Dino Valente, the Band’s Richard Manuel). The Band’s “Katie’s Been Gone,” included on The Basement Tapes, is rumored to be about Dalton. (by Richie Unterberger)

Dalton’s bluesy, world-weary voice is often compared to jazz singer Billie Holiday, though Dalton loathed the comparison and said Bessie Smith was a greater influence. Dalton sang blues, folk, country, pop, Motown—making over each song in her own style. She played the twelve string guitar and a long-neck banjo.

Known as “the folk singer’s answer to Billie Holiday” and “Sweet Mother K.D.”, Dalton is said to be the subject of the song “Katie’s Been Gone” (composed by Richard Manuel and Robbie Robertson) on the album The Basement Tapes by The Band and Bob Dylan, who wrote of Dalton that “My favorite singer…was Karen Dalton. Karen had a voice like Billie Holiday and played guitar like Jimmy Reed… I sang with her a couple of times.” Fred Neil once remarked, “She sure can sing the shit out of the blues.”

Modern artists Nick Cave[2], Devendra Banhart[3], and Joanna Newsom have all noted her as an influence. So does country singer Lacy J. Dalton, who knew Dalton in Greenwich Village and adopted her surname as a tribute.

Commercial failure of her album In My Own Time and her estrangement with her children contributed to further substance abuse later in Dalton’s life. Friend Lacy J. Dalton helped send her to rehab in Texas in the early 1990s; a stay which only lasted a couple of days before she demanded to be taken back home to Woodstock again.

Dalton lived in rural Colorado with husband Richard Tucker and daughter Abralyn during some years in the 1960s, in a small mining cabin in Summerville. Eventually she moved back to New York via LA, and later to Woodstock. Her last resort was a mobile home located in a clearing off Eagle’s Nest Road, outside the town of Hurley, near Woodstock, New York. She died there in March 1993 from an AIDS-related illness, aged 55. According to her friend Peter Walker, she had been living with the disease for over 8 years.(wikipedia)

In My Own Time is the second and last album the mercurial singer Karen Dalton ever cut. Following It’s So Hard to Tell Who’s Going to Love You the Best, producers Michael Lang and Harvey Brooks (Dalton’s longtime friend and the bassist on both her records) did something decidedly different on In My Own Time (titled after the slow process of getting the album done — in Dalton’s relaxed and idiosyncratic manner of recording), and the result is a more polished effort than her cozy, somewhat more raw debut. This time out, Dalton had no trouble doing multiple takes, though the one chosen wasn’t always the most flawless, but the most honest in terms of the song and its feel. The album was recorded at Bearsville up in Woodstock, and the session players were a decidedly more professional bunch than her Tinker Street Cafe friends who had appeared on her first effort. Amos Garrett is here, as is Bill Keith on steel, pianist John Simon, guitarist John Hall, pianist Richard Bell, and others, including a star horn section that Brooks added later. If Lang was listed as producer, it was Brooks who acted as the session boss, which included a lot of caretaking when it came to Dalton — who began recording in a more frail condition than usual since she was recovering from an illness.

In My Own Time is the better of her two offerings in so many ways, not the least of which is the depth she is willing to go inside a song to draw its meaning out, even if it means her own voice cracks in the process. The material is choice, beginning with Dino Valente’s gorgeous “Something on Your Mind.” Brooks’ rumbling single-note bassline opens it with a throb, joined by a simple timekeeping snare, pedal steel, and electric guitars. When Dalton opens her mouth and sings “Yesterday/Anyway you made it was just fine/Saw you turn your days into nighttime/Didn’t you know/You can’t make it without ever even trying/And something’s on your mind…,” a fiddle enters and the world just stops. The Billie Holiday comparisons fall by the wayside and Dalton emerges as a singer as true and impure as Nina Simone (yet sounds nothing like her), an artist who changed the way we hear music. The band begins to close in around her, and Dalton just goes right into the middle and comes out above it all. She turns the song inside herself, which is to say she turns it inside all of us and its meaning is in the sound of her voice, as if revelation were something of an everyday occurrence if we could only grasp its small truth for what it weighs. 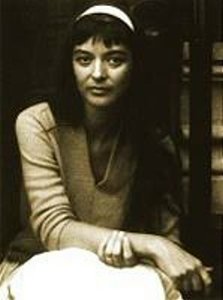 When the album moves immediately into Lewis and Wright’s “When a Man Loves a Woman,” Dalton reveals the other side of Percy Sledge’s version. This woman who was so uncaged and outside the world that she died homeless on the streets of New York in the 1990s was already declaring the value of loving someone even if that someone couldn’t return the love as profoundly — which doesn’t mean it isn’t appreciated in the depths of the Beloved’s being. Dalton sings the song as if wishing that she herself could accept such a love. Her voice slips off the key register a couple of times, but she slides into her own, which is one of the hidden places in the tune that one didn’t even know existed. The layered horns don’t begin to affect her vocal; they just move it inside further. And the woman could sing the blues in a way that only Bob Dylan could, from the skeletal framework of the tune toward the truth that a blues song could convey — just check her reading of Paul Butterfield’s “In My Own Dream,” with some gorgeous steel playing by Keith. Her version of Holland-Dozier-Holland’s “How Sweet It Is (To Be Loved by You)” has her singing completely outside the time and beat of the tune; floating through the tune’s middle, she glides, slips, and slides like a jazz singer in and around its changes.

Another standout is Richard Manuel’s “In a Station.” As a piano, rolling tom-toms, and an organ introduce it, Dalton is at her most tender; she feels and communicates the understatement in the original, and lets her voice flow through even as the band plays on top of her. And when her voice cracks, it’s as if the entire tune does, just enough to let in the light in its gorgeous lyric. Of course, it wouldn’t be a Dalton album if there weren’t traditional

tunes here, and so there are three, including “Katie Cruel,” with Dalton playing her banjo and finding the same voice that Dock Boggs did, the same warped cruelty and search for the brutality of love. “Same Old Man” is another banjo-based tune set in an Eastern modal drone. Only the stark loneliness and outsider presence of Dalton’s voice shift and move through the large terrain provided by that drone and create the very substance of song from within it. It’s spooky, otherworldly. George Jones’ “Take Me” is transformed from a plea to a statement; it’s a command to the Beloved to deliver her from her current place outside love to become its very substance. It’s still a country song, but there’s some strange transgender delivery that crosses the loneliness of Hank Williams with the certainty of Tammy Wynette, and is rawer than both.

If one can only possess one of Karen Dalton’s albums, In My Own Time is the one. It creates a sound world that is simply unlike any other; it pushes the singer outside her comfort zone and therefore brings listeners to the place Dalton actually occupied as a singer. Without apology or concern for technique, she could make any song her own, creating a personal narrative that could reach outside the song itself, moving through her person and becoming the truth for the listener.

The fine Light in the Attic label reissued this set — originally on Paramount — on compact disc in 2006. It’s in a handsome package with remastered sound and a beautiful booklet that includes a slew of photos and essays by Lenny Kaye, Nick Cave, and Devendra Banhart. It’s a handsome tribute to a nearly forgotten but oh so necessary talent. (by Thom Jurek) 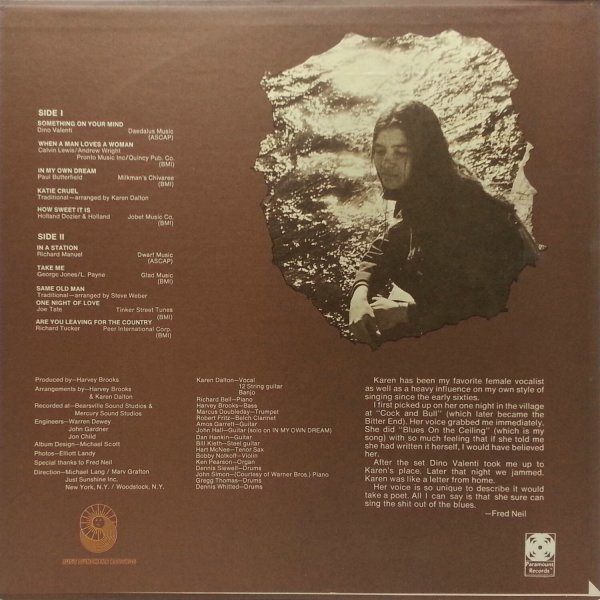 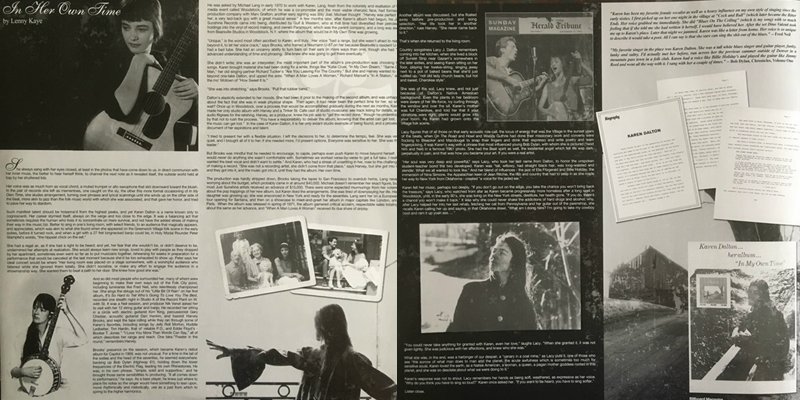