Richard Allen “Blue” Mitchell (March 13, 1930 – May 21, 1979) was an American jazz, rhythm and blues, soul, rock and funk trumpeter and composer who recorded albums as leader and sideman for Riverside, Blue Note, and Mainstream Records.

Mitchell was born and raised in Miami, Florida. He began playing trumpet in high school, where he acquired his nickname, Blue.

After high school, he played in the rhythm and blues ensembles of Paul Williams, Earl Bostic, and Chuck Willis. After returning to Miami, he was discovered by Cannonball Adderley, with whom he recorded for Riverside Records in New York in 1958.

He then joined the Horace Silver Quintet, playing with tenor saxophonist Junior Cook, bassist Gene Taylor, and drummer Roy Brooks. Mitchell stayed with Silver’s group until the band’s break-up in 1964, after which he formed a group with members from the Silver quintet, substituting the young pianist Chick Corea for Silver and replacing Brooks, who had fallen ill, with drummer Al Foster. This group produced a number of records for Blue Note. It disbanded in 1969, after which Mitchell joined and toured with Ray Charles until 1971. 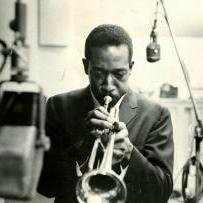 From 1971 to 1973 Mitchell performed with John Mayall, appearing on Jazz Blues Fusion and subsequent albums. From the mid-70s he recorded and worked as a session man in the genres noted previously, performed with the big band leaders Louie Bellson, Bill Holman, and Bill Berry and was the principal soloist for Tony Bennett and Lena Horne. Other band leaders Mitchell recorded with include Lou Donaldson, Grant Green, Philly Joe Jones, Jackie McLean, Hank Mobley, Johnny Griffin, Al Cohn, Dexter Gordon, and Jimmy Smith.
Death
Mitchell performed with the Harold Land quintet up until his death from cancer on May 21, 1979, in Los Angeles, at the age of 49.

Big 6 is the debut album by American trumpeter Blue Mitchell recorded in 1958 and released on the Riverside label. It contains the first recording of Benny Golson’s jazz standard “Blues March”.(wikipedia) 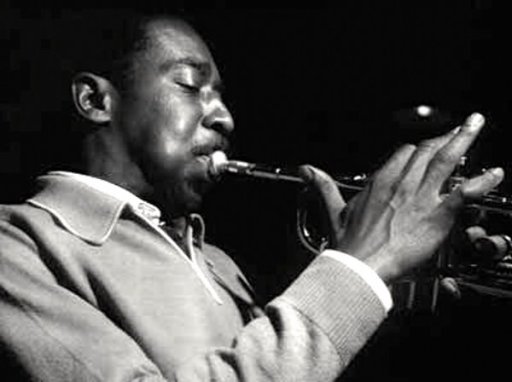 Trumpeter Blue Mitchell was a virtual unknown when he recorded this Riverside album, his first as a leader. Mitchell is heard in excellent form in an all-star sextet with trombonist Curtis Fuller, tenor great Johnny Griffin, pianist Wynton Kelly, bassist Wilbur Ware, and drummer Philly Joe Jones. In addition to some group originals, obscurities, and the standard “There Will Never Be Another You,” the group also plays the earliest recorded version of Benny Golson’s “Blues March,” pre-dating Art Blakey’s famous recording. (by Scott Yanow) 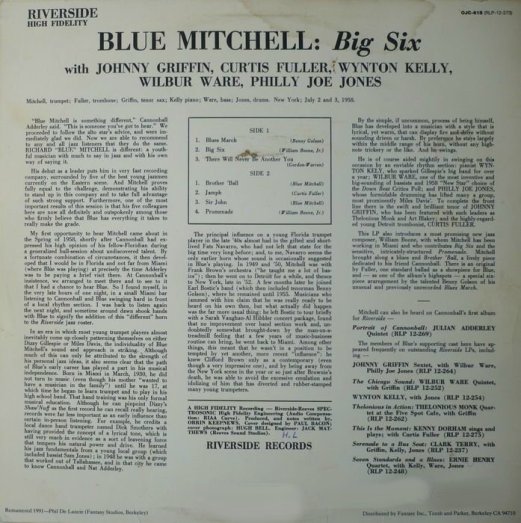 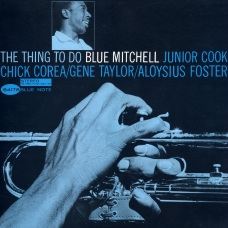 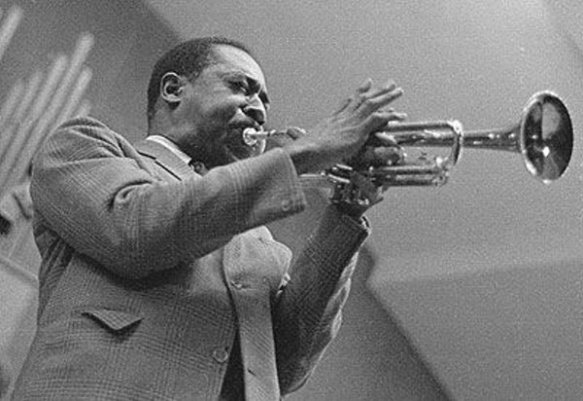