Thelonious Sphere Monk (October 10, 1917 – February 17, 1982) was an American jazz pianist and composer. He had a unique improvisational style and made numerous contributions to the standard jazz repertoire, including “‘Round Midnight”, “Blue Monk”, “Straight, No Chaser”, “Ruby, My Dear”, “In Walked Bud”, and “Well, You Needn’t”. Monk is the second-most-recorded jazz composer after Duke Ellington.

Monk’s compositions and improvisations feature dissonances and angular melodic twists and are consistent with his unorthodox approach to the piano, which combined a highly percussive attack with abrupt, dramatic use of switched key releases, silences, and hesitations. His style was not universally appreciated; the poet and jazz critic Philip Larkin dismissed him as “the elephant on the keyboard”.

Monk was renowned for a distinct look which included suits, hats, and sunglasses. He was also noted for an idiosyncratic habit during performances: while other musicians continued playing, Monk would stop, stand up, and dance for a few moments before returning to the piano.

Monk is one of five jazz musicians to have been featured on the cover of Time magazine (the others being Louis Armstrong, Dave Brubeck, Duke Ellington and Wynton Marsalis).

Monk was friends with poet Allen Ginsberg who introduced him to Timothy Leary. Monk was one of several artists Leary wanted to recruit for his studies on the effects of psilocybin in creative individuals. (wikipedia)

In November of 1969 Thelonious Monk appeared at the Berliner Jazztage (“Berlin Jazz Days,” now known as JazzFest Berlin) and played a series of Duke Ellington pieces on solo piano. Monk brought his own quirky genius — his jagged-edged, percussive playing style and harmonic dissonance — to Ellington’s elegant melodies. The result was magic. (openculture.com) 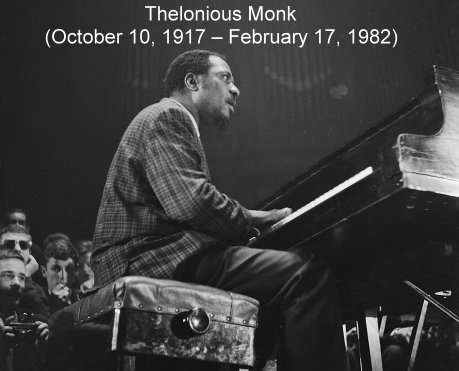