Pentangle (or The Pentangle) are a British folk-jazz band with an eclectic mix of folk, jazz, blues and folk rock influences. The original band was active in the late 1960s and early 1970s, and a later version has been active since the early 1980s. The original line-up, which was unchanged throughout the band’s first incarnation (1967–1973), was: Jacqui McShee (vocals); John Renbourn (vocals and guitar); Bert Jansch (vocals and guitar); Danny Thompson (double bass); and Terry Cox (drums).

The name Pentangle was chosen to represent the five members of the band, and is also the device on Sir Gawain’s shield in the Middle English poem Sir Gawain and the Green Knight which held a fascination for Renbourn.

In 2007, the original members of the band were reunited to receive a Lifetime Achievement award at the BBC Radio 2 Folk Awards and to record a short concert that was broadcast on BBC radio. The following June, all five original members embarked on a twelve-date UK tour. 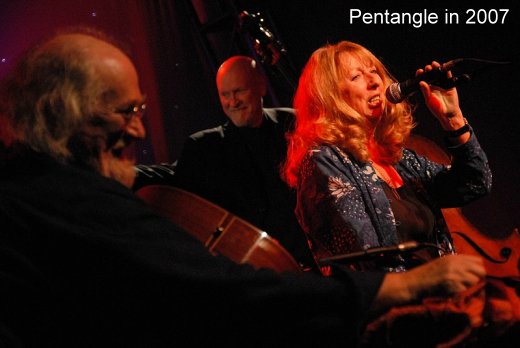 Open the Door is an album by Pentangle. The band had split in 1973 and reformed in the early 1980s. By the time this album was recorded, John Renbourn had left the band to enroll in a music degree course and his place was taken by Mike Piggott. The other band members were unchanged from the original Pentangle line-up: Terry Cox, Bert Jansch, Jacqui McShee and Danny Thompson. It was produced by John Chelew.

The album was released in 1985 on Spindrift, SPIN 111. Some sources give 1982, 1983 or 1984 (perhaps because recording began in 1983 and the ‘published’ and ‘copyright’ dates on the album are 1984, suggesting that it had been planned for an earlier release). In the United States It was released on Varrick VR017 (LP) and CRV017 (Cassette). It was rereleased in 2006 on Talking Elephant, the longest time that has ever passed for an original Pentangle album to become available on CD. Compared to their previous recordings it was relatively poorly reviewed. Varrick is an American label that also brought some Fairport Convention albums back into print. (wikipedia)

A reunion of four of Pentangle’s original members (only John Renbourn is missing), Open the Door is a resounding artistic success. Impeccable jazz-inflected musicianship and folkie vocal harmonies combine to produce one of the best outings released under the Pentangle name in their multi-decade career.

Bert Jansch’s melodic, bluesy acoustic guitar provides the underpinning driving the compositions, with tonal colorations courtesy of Mike Piggott on violin and guitars. Jacqui McShee’s vocals are beautiful, and the rhythm section of drummer Terry Cox and double bassist Danny Thompson nimbly maneuver through the tricky slow to midtempo rhythms. When dissected, this is complex, challenging music, but the listener need not get bogged down in the minutiae of the compositions and arrangements, he or she need merely lie back and enjoy this pastoral ride through the English countryside. This is gorgeous stuff. (by Jim Newsom)