Alex de Grassi (born February 13, 1952, in Yokosuka, Japan) is a Grammy Award nominated American fingerstyle guitarist. de Grassi came from a musical family. His grandfather was a violinist with the San Francisco Symphony. His cousin, William Ackerman, founded Windham Hill Records and signed de Grassi to his label. de Grassi’s first album “Turning: Turning Back”, an instrumental collection of solo guitar pieces, was released by Windham Hill in 1978. His next album, “Slow Circle” (1979) was his last for Windham Hill to exclusively feature solo guitar work. As the label shifted away from folk into a more new age sound de Grassi was joined by an ensemble of Windham Hill artists on subsequent albums.

For his fifth album, “Altiplano” (1987), released by RCA Novus rather than Windham Hill, de Grassi turned to more of a jazz sound. After one more new age album he began mixing in world music influences, particularly South American music, on his album “The World’s Getting Loud” (1993), his last release for Windham Hill. He reprised the South American theme on “Tata Monk” (2000). de Grassi was nominated for a Grammy Award for his 1998 album “The Water Garden.” (discogs.com) 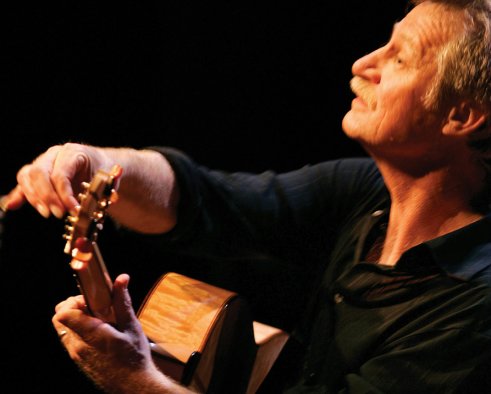 The first true ensemble album in the Windham Hill style – Clockwork really defined the label’s sound for the next several years. Alex de Grassi proves that not only is he one of his generations finest guitarists, he has a larger musical vision, ambition and extraordinary taste in collaborators. The players all bring both a technical and lyrical deftness to their parts, and as the album name implies, there is a musical interplay that creates a rhythmic whole that is greater than the sum of the parts. Fans of de Grassi’s solo guitar work are rewarded on the second side with the Bougainvillea Suite opening – gorgeous and thoughtful guitar music.

Clockwork can be hard to find, and it is not the last word in either de Grassi’s or the label’s collective work, but it’s important as a new creative step in the genre-defining label, and a worthy listen in and of itself. Recommended. (by Johnny Dark)

CLOCKWORK (the song and the album) is a landmark of change. Windham Hill carefully cultivated a solo-performer acoustic niche in their early years, and Mr de Grassi’s previous albums were accordingly solo performances. By 1981, they cautiously moved toward ensemble performance. CLOCKWORK the album stands on the threshold of this transition, with its highlight being the title track: “Clockwork” the song is a marvelous construction, brilliantly arranged for six performers, firmly grounded in the British steel-string tradition of Mr de Grassi’s earlier albums. It was entirely new yet still traditional, and it changed the direction of Windham Hill as a whole: ensembles became the rule, and WH went into the big time for New Age music.

Further, by featuring the then-unheard lyricon of Chuck Greenberg, this song led directly to the reformation of fusion-band Shadowfax — which for better and/or worse ultimately led WH out of its traditional shell & into the New Age limelight. (by F.J. Prisco) 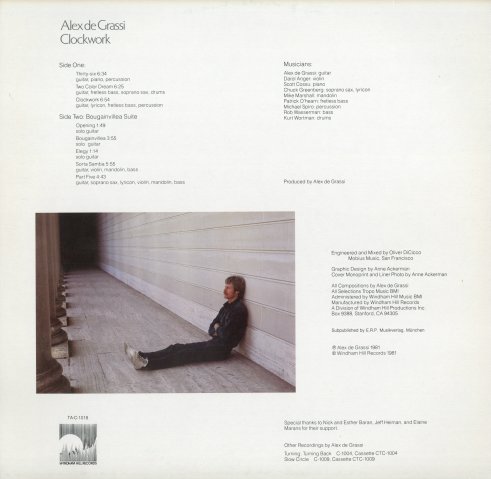