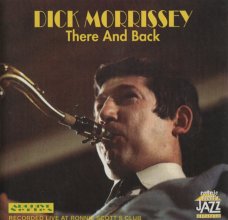 Richard Edwin Morrissey (9 May 1940 – 8 November 2000) was a British jazz musician and composer. He played the tenor sax, soprano sax and flute.

Making his name as a hard bop player, he appeared regularly at the Marquee Club from August 1960, and recorded his first solo album at the age of 21, It’s Morrissey, Man! (1961) for Fontana, featuring Stan Jones on piano, Colin Barnes on drums, and The Jazz Couriers founding member Malcolm Cecil on bass. He spent most of 1962 in Calcutta, India as part of the Ashley Kozak Quartet, playing three 2-hour sessions seven days a week, before returning to the UK and forming his quartet with Harry South – who had also been in the quartet in Calcutta – on piano. They were joined by former The Jazz Couriers bassist Phil Bates and variously, another ex-The Jazz Couriers member, Bill Eyden, Jackie Dougan or Phil Seamen on drums. The Dick Morrissey Quartet recorded three LPs, Have You Heard? (1963); the live recording Storm Warning! (1965) on Mercury; and Here and Now and Sounding Good! (1966).

The quartet, played regular London gigs at The Bull’s Head, Barnes and at Ronnie Scott’s, whose manager, Pete King, once said that Ronnie’s was kept going in those days due to the crowds Dick Morrissey pulled in. During this time he also played extensively in bands led by Ian Hamer and Harry South, including The Six Sounds, featuring Ken Wray and Dick Morrissey, a band which by 1966 had developed into the Ian Hamer Sextet featuring South, Dick Morrissey, Keith Christie, Kenny Napper and Bill Eyden, among other leading UK-based jazz musicians.

He also played briefly in Ted Heath’s Big Band, which featured many name jazz musicians over the years, as well as appearing as a featured guest on the classic Johnny Dankworth and his Orchestra recording, What the Dickens! and the Harry South Big Band. Likewise, together with fellow tenors Stan Robinson and Al Gay, baritone sax Paul Carroll, and trumpets Ian Carr, Kenny Wheeler and Greg Brown, Dick Morrissey formed part of (Eric Burdon and) The Animals’ Big Band that made its one-and-only public appearance at the 5th Annual British Jazz & Blues Festival in Richmond (1965).

By the mid-1960s, he had over two consecutive years come in second place behind Hayes in the Melody Maker Jazz Poll (1966 & 1967) and many US musicians touring Britain at the time, notably Brother Jack McDuff, a live recording with Jimmy Witherspoon,[9] two LPs with J. J. Jackson, and Sonny Stitt together with guitarist Ernest Ranglin (live at Ronnie Scott’s) recorded with him during the Sixties and early Seventies.

Dick Morrissey performed regularly at the National Jazz Festival in the 1960s; his last appearance under his own name there was at the 6th festival held at Windsor (1966), although he would return to the festival with If in 1972 for their only appearance.

In 1969, Dick Morrissey, by then many-time winner and runner-up of the Melody Maker Jazz Poll, teamed up with another Melody Maker award-winner, guitarist Terry Smith, with whom he had worked in J. J. Jackson’s Band, to form an early jazz-rock group, If.

When If disbanded in 1975, Dick Morrissey went to Germany on a tour with Alexis Korner and then to the United States to tour and record with the Average White Band, and met up with Glaswegian guitarist, Jim Mullen, who had played with Brian Auger’s Oblivion Express with some of the members of AWB, and together they formed Morrissey–Mullen (aka M&M), recording their first album, Up (1976) in New York. On returning to Great Britain, Morrissey–Mullen formed a band which rapidly became Britain’s most highly acclaimed jazz-fusion band of the day, initially including two top session musicians from New Zealand, Frank Gibson, Jr. and Bruce Lynch.

M&M recorded seven albums over the 16 years they were together, with Morrissey and Mullen collaborating on each other’s solo albums, notably After Dark (1983) with John Critchinson, Ron Mathewson, Martin Drew, Barry Whitworth. The line-up for later gigs also featured John Burch on piano, with whom Dick Morrissey would also form an informal group called “Our Band”, also featuring Louis Stewart and/or Jim Mullen on guitar, as well as the above-mentioned Ron Mathewson and Martin Drew. 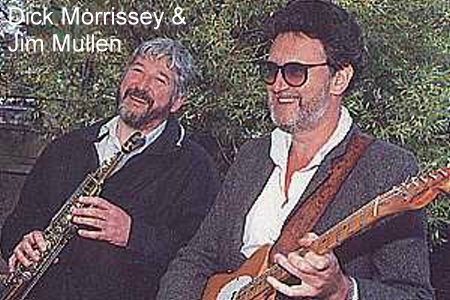 As well as leading his own jazz combos, as a “musicians’ musician,” Dick Morrissey was in continuous demand as a guest artist with other British or UK-based jazz musicians, most especially with trios and quartets. Thus he was often to be found jamming with established names such as Tubby Hayes, Bill Le Sage, Roy Budd, Ian Hamer, Ian Carr, Tony Lee, Tony Archer, Michael Garrick (who dedicated him his 1965 composition “Leprechaun Leap”),[12] Spike Robinson, Allan Ganley, alto saxophonist Peter King, Ray Warleigh, etc.

Whatever the style of music he was playing, be it pop, rock, hard bop or straight ahead jazz, Dick Morrissey showed that music could be appreciated at many different levels, and that even the most simplistic pop or rock song could be embellished with an authentic jazz groove. In this way he was able to reach new audiences and albeit indirectly, introduce people to jazz. When at different stages of his career, journalists asked him to define his style, he would refer to Duke Ellington’s definition: “It’s all music” and pointing out that for Ellington there were only two types of music: “good” or “bad”. To that end, his last few recordings concentrated more than ever on jazz standards and the Great American Songbook. 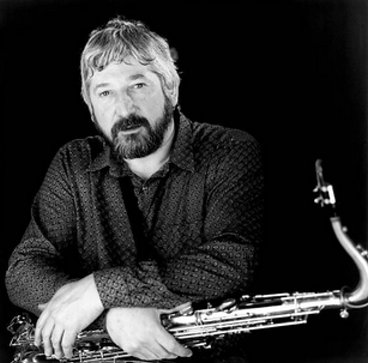 Morrissey died on 8 November 2000, aged 60, after many years fighting various forms of cancer. To the end of his life, he could be seen and heard, seated in his wheelchair, playing to a full house at his local pub, The Alma, in Deal, Kent. His last gig was a reunion with the Morrissey–Mullen band (including Jim Mullen and Pete Jacobsen) at the Astor theatre in Deal. His funeral, held in Deal, was attended by many of his fellow musicians including Allan Ganley. Following his death, the UK national press published the following obituaries

In the obituary published in The Times, British music critic Chris Welch wrote that Dick Morrissey was a

“fiery musician who straddled the worlds of jazz and rock, but with a style built firmly on bebop and widely regarded as the most brilliant British saxophonist to emerge in the wake of Tubby Hayes. His advocacy of jazz-rock fusion successfully brought jazz to a rock audience and rock to a jazz audience”.

“ability to get through to an audience. He was one of the great communicators of jazz and … able to communicate with his listeners and quickly to establish a bond with them … [l]ike Charlie Parker before him, he was somehow able to lift audiences that knew little or nothing about his music”.

Although one could from time to time imagine a feel of the American players Sonny Rollins or Johnny Griffin in Morrissey’s work, he was outstanding among British players for his originality. Despite the sophistication of his ideas there was often a down-home quality to his punchy and hard swinging solos, and this was a reflection of one of his idols, the tenorist Stanley Turrentine. He was a lightning improviser and the flood of his inventions flew through his fingers with ease, for he was a masterful player.”

Ronald Atkins, writing in The Guardian, put it thus:

“John Coltrane’s approach to the tenor had yet to make much of an impact in Britain, and Morrissey came up with a startling and warmly appreciated blend of Stan Getz and Sonny Rollins, the phrasing of one allied to the abrasive tones of the other. He was also influenced by the example of Tubby Hayes, whose lightening-quick [sic] forays through complex harmonies he was probably the first to emulate”.

The obituary in The Daily Telegraph read:

“Dick Morrissey, who has died aged 60, was among the finest European jazz musicians of his generation. His command of the tenor saxophone was masterly, but it was the unforced fluency of his playing, expressed in a characteristically broad and sweeping tone, that attracted the greatest admiration.

Stylistically, Morrissey was so flexible that he was able to fit happily into many contexts, from straightforward hard-bop, through jazz-rock and jazz-funk to soul-inflected pop music. He possessed the remarkable knack of making everything he played sound not only exciting but happy.” 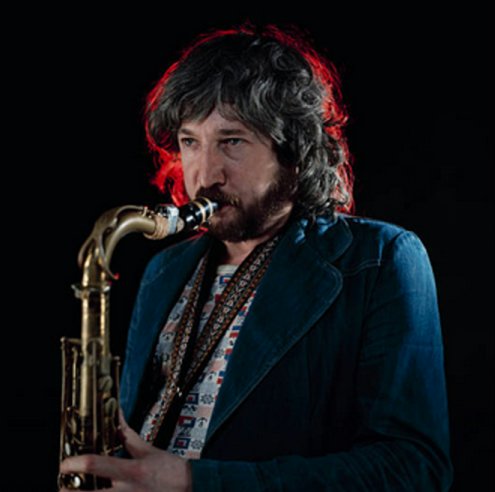 There and Back is a CD released in 1997 which contains previously unreleased live material by the Dick Morrissey Quartet. The five tracks were recorded over two nights, with two different line-ups of the quartet, at Ronnie Scott’s in London in 1964/1965. (wikipedia)

Listen to these early recordings and you will know why Dick Morrissey was among Dick Heckstall.Smith one of the finest  saxophone player frtom UK. 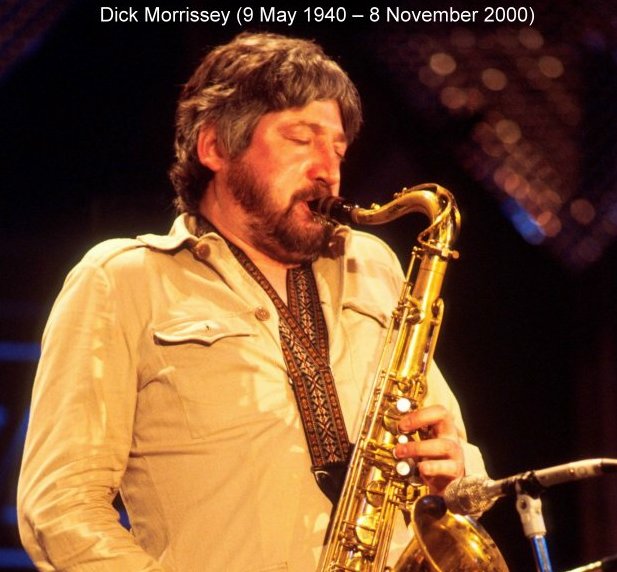