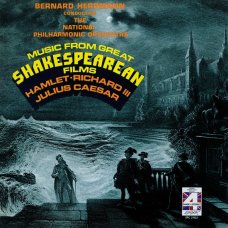 Bernard Herrmann (born Max Herman; June 29, 1911 – December 24, 1975) was an American composer and conductor of Russian-Jewish descent best known for his work in composing for films. As a conductor, he championed the music of lesser-known composers.

An Academy Award-winner (for The Devil and Daniel Webster, 1941; later renamed All That Money Can Buy), Herrmann mainly is known for his collaborations with director Alfred Hitchcock, most famously Psycho, North by Northwest, The Man Who Knew Too Much, and Vertigo. He also composed scores for many other films, including Citizen Kane, Anna and the King of Siam, The Day the Earth Stood Still, The Ghost and Mrs. Muir, Cape Fear, Fahrenheit 451, and Taxi Driver. He worked extensively in radio drama (composing for Orson Welles), composed the scores for several fantasy films by Ray Harryhausen, and many TV programs, including Rod Serling’s The Twilight Zone and Have Gun – Will Travel.

Herrmann’s music is typified by frequent use of ostinati (short repeating patterns), novel orchestration, and in his film scores, an ability to portray character traits not altogether obvious from other elements of the film.

Early in his life, Herrmann committed himself to a creed of personal integrity at the price of unpopularity: the quintessential artist. His philosophy is summarized by a favorite Tolstoy quote: ‘Eagles fly alone and sparrows fly in flocks.’ Thus, Herrmann only composed music for films when he was allowed the artistic liberty to compose what he wished without the director getting in the way: the cause of the split with Hitchcock after over a decade of composing scores for the director’s films.

Herrmann conducts the CBS Radio orchestra at a rehearsal of The Mercury Theatre on the Air directed by Orson Welles (1938): 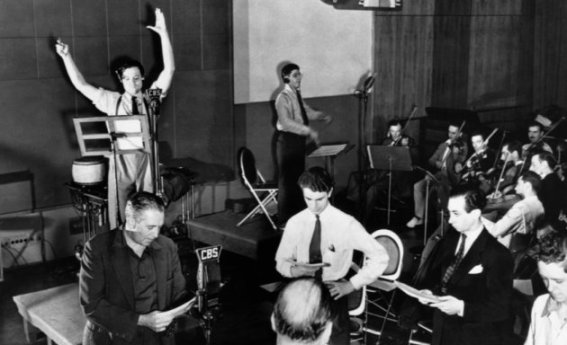 His philosophy of orchestrating film was based on the assumption that the musicians were selected and hired for the recording session – that this music was not constrained to the musical forces of the concert hall. For example, his use of nine harps in Beneath the 12-Mile Reef created an extraordinary underwater-like sonic landscape; his use of four alto flutes in Citizen Kane contributed to the unsettling quality of the opening, only matched by the use of 12 flutes in his unused Torn Curtain score; and his use of the serpent in White Witch Doctor is possibly the first use of that instrument in a film score.

Herrmann said: “To orchestrate is like a thumbprint. I can’t understand having someone else do it. It would be like someone putting color to your paintings.”

Herrmann subscribed to the belief that the best film music should be able to stand on its own legs when detached from the film for which it was originally written. To this end, he made several well-known recordings for Decca of arrangements of his own film music as well as music of other prominent composers. (wikipedia)

The National Philharmonic Orchestra was a British orchestra formed in 1964 to be used solely for recording purposes. The orchestra was formed by Charles Gerhardt, a producer at RCA Records and Sidney Sax partially to fill the need of Reader’s Digest. Before settling on the name in 1970 they went by a variety of other names including the RCA Victor Symphony Orchestra, and the London Promenade Orchestra.

The orchestra had a variety of musicians and conductors over its lifetime and was used quite often for the soundtracks of films.

The orchestra is no longer together. (discogs.com)

And together they peformes some soundtracks for dramas by William Shakespear … sometimes very loud and dynamix, sometimes very quite and intimate … a great mixture of dramatic music !