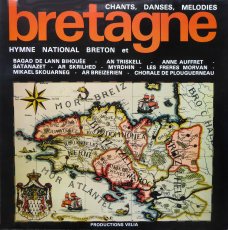 And here´s a wonderfulö album with music from ther Bretagne (english: Brittany)

Brittany is a peninsula, historic country and cultural region in the west of modern France, covering the western part of what was known as Armorica during the period of Roman occupation. It became an independent kingdom and then a duchy before being united with the Kingdom of France in 1532 as a province governed as a separate nation under the crown.

Brittany has also been referred to as Less, Lesser or Little Britain (as opposed to Great Britain, with which it shares an etymology). It is bordered by the English Channel to the north, Normandy to the northeast, eastern Pays de la Loire to the southeast, the Bay of Biscay to the south, and the Celtic Sea and the Atlantic Ocean to the west. Its land area is 34,023 km2 (13,136 sq mi).

Brittany is the site of some of the world’s oldest standing architecture, home to the Barnenez, the Tumulus Saint-Michel and others, which date to the early 5th millennium BC.[3][4] Today, the historical province of Brittany is split among five French departments: Finistère in the west, Côtes-d’Armor in the north, Ille-et-Vilaine in the northeast, Morbihan in the south and Loire-Atlantique in the southeast. 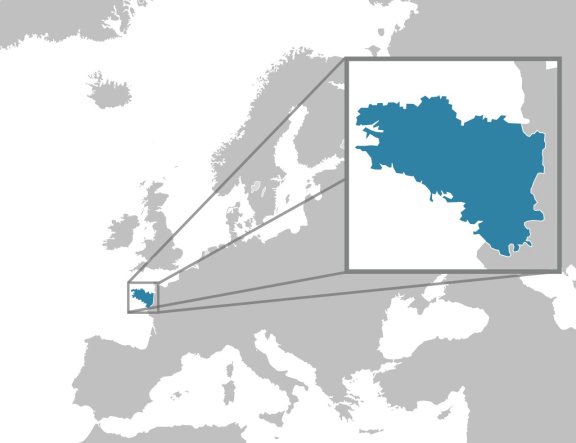 At the 2010 census, the population of historic Brittany was estimated to be 4,475,295. Of these, 71% lived in the region of Brittany, while 29% lived in the Loire-Atlantique department. In 2017, the largest metropolitan areas were Nantes (972,828 inhabitants), Rennes (733,320 inhabitants), and Brest (321,364 inhabitants). Brittany is the traditional homeland of the Breton people and is one of the six Celtic nations, retaining a distinct cultural identity that reflects its history. A nationalist movement seeks greater autonomy within the French Republic.

Since the early 1970s, Brittany has experienced a tremendous revival of its folk music. Along with flourishing traditional forms such as the bombard-binou pair and fest-noz ensembles incorporating other additional instruments, it has also branched out into numerous subgenres.

Traditional Breton folk music includes a variety of vocal and instrumental styles. Purely traditional musicians became the heroes of the roots revival in the second half of the 20th century, notably the Goadec sisters (Maryvonne, Thasie, and Eugénie). At the end of the 19th century, the vicomte Theodore Hersart de la Villemarqué’s collection of largely nationalistic Breton songs, Barzaz Breiz, was also influential, and was partially responsible for preserving Breton traditions.

Kan ha diskan (roughly translated as call and response singing) is probably the most common type of Breton vocal music, and is the most typical style to accompany dance music. It has become perhaps the most integral part of the Breton roots revival, and was the first genre of Breton music to gain some mainstream success, both in Brittany and abroad.

The lead singer is the kaner, and the second singer is the diskaner. The kaner sings a phrase, and the diskaner sings the last few lines with the kaner, then repeats it alone until the same last few lines, when the kaner again joins in. The phrase’s repetition is changed slightly in each execution. Kan ha diskan can be songs about any subject, but must meet one of a number of a meters used in folk dances, mostly line or round. Vocables, or nonsense syllables (typically tra la la la leh no), are sometimes used to drag out lines. Usually a kan ha diskan lasts from 5 to 20 minutes.

In addition to the Goadecs, the singer Loeiz Ropars was largely responsible for maintaining kan ha diskan’s vitality in the middle of the 20th century, and the 1960s and 1970s revivalists drew largely on his work. They also venerated performers like Ar breudeur Morvan and Les soeurs Goadec/Ar c’hoarezed Goadeg. During the folk revival, aspiring musicians sought out elder teachers from whom to learn kan ha diskan, generally being viewed as successful when the student can act as diskaner to their mentor. Teachers of this era included Marcel Guilloux and Yann-Fanch Kemener.

It was, however, Ropars who adapted the fest-noz, a “night party” in rural communities, for a new type of fest-noz (amplification for the singers), and set the stage for the folk revival.
Kantikoù (hymns)

Kantik [fr; br] (“canticle”) is a type of hymn that is vocal but includes accompaniment from a variety of instruments, commonly including the harp, pipes and organ. Modern performers include Anne Auffret and the choir Ensemble Choral du Bout du Monde.
Gwerzioù and sonioù (laments and ballads)

Gwerzioù and sonioù are the two primary classifications of Breton unaccompanied folk song. Vocals for both types are usually by a soloist. A gwerz is a lament characterized by a gloomy tone and subject matter. A Gwerz typically describes tragic events such as murders, deaths, wars, forced emigration or lost love. 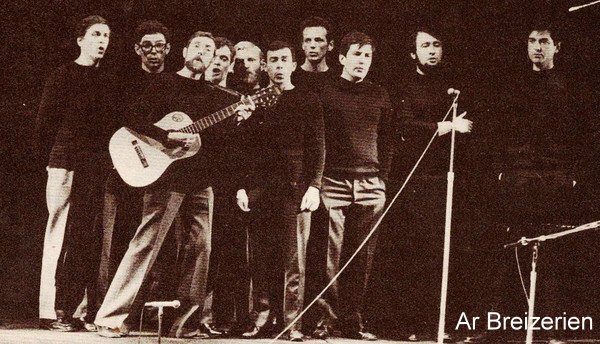 The chants de marins, are shanties, ballads about shipwrecks, sailing and loss of life, often accompanied by instruments such as the fiddle and accordion.

Although it is not exclusively Breton, the large number of sailors in this region have given this form of musical expression a high-profile. The best known modern performers are Djiboudjep and Cabestan, along with numerous but less known bands as Tonnerre de Brest, L’Echo, Les Boucaniers or Taillevent. There are new composers too : Michel Tonnerre is a well-known modern composer of Chants de marins ; some of his compositions are as famous as ancient songs (Quinze marins, Satanicles, Vire au cabestan, Mon petit garçon). 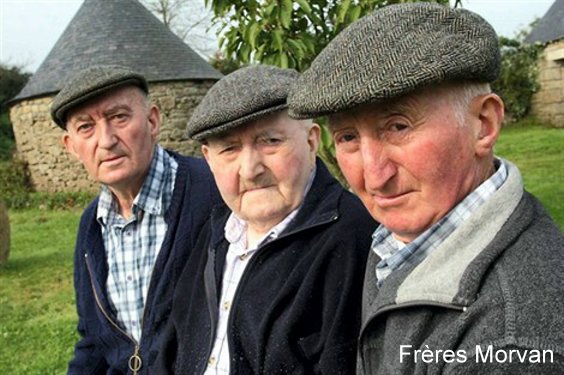 There is an annual Chants de marins contest in the small town of Paimpol, in north Brittany, where the most famous shantymen of the world meet. At any harbour festival in Brittany Chants de marins can usually be heard. (wikipedia)

Listen and enjoy all these wonderful melodies … many fantastic colors of music ! 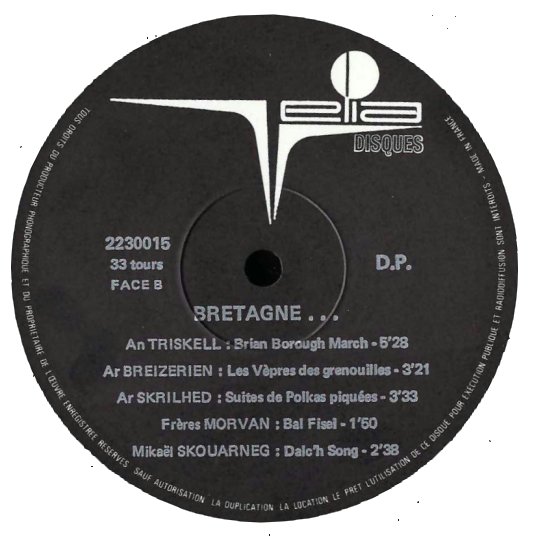 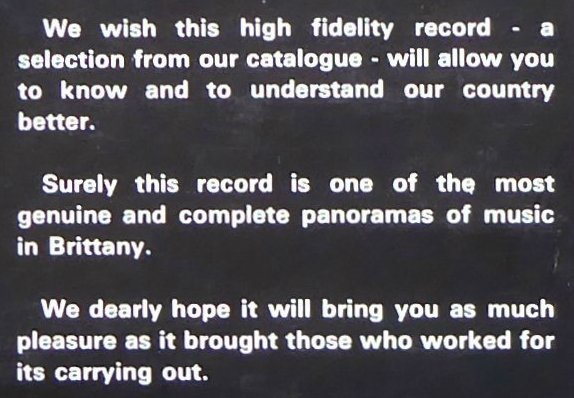