Kramer came to prominence as a teenager in 1964 as a co-founder of the Detroit rock group MC5 (Motor City 5), a group known for their powerful live performances and radical left-wing political stance. MC5 broke up amid personality conflicts, drug abuse, and personal problems, which, for Kramer, led to several fallow years, as he battled drug addiction before returning to an active recording and performing schedule in the 1990s.

Rolling Stone ranked him number ninety-two on their list of the “100 Greatest Guitarists of all Time”. (wikipedia)

All-knowing adolescent punk rock fans beware: Wayne Kramer is an old dude who was once in a band called MC5 that was important long before you were a glimmer in your parents’ eyes. Yes, I know, his second solo record is on Epitaph, but believe me when I tell you he sounds nothing like Rancid or The Offspring. There is little chance he’ll sell a million copies of Dangerous Madness and it’s even less likely you’ll see his aging mug in high rotation on MTV.

Too bad, though, because to my jaded, old ears, Mr. Kramer has made a mighty fine record. He still throttles a Gibson SG like few others, particularly on the snarling title track, but he seems just as comfortable crooning X-inspired Americana like “Something Broken in the Promised Land.” I’m unfamiliar with Kramer’s first Epitaph solo record, The Hard Stuff, but Dangerous Madness covers a wide variety of material from the blues to punk to hard rock to a couple of ’60s-like, spoken word rants accompanied by suitably eclectic music. The amazing thing is that Kramer sounds comfortable doing it all.

It’s refreshing to hear an influential artist return to music he obviously wants to play rather than mine some weak, nostalgiac trip. Sure, a few of these songs smack of classic MC5 rave-ups, but they come naturally and unforced from one of the original sculptors of that sound. So, the kids may not appreciate this record, but for us old fogies it’s a nice, varied collection of kick-ass rock & roll songs. No mohawk required. (Adem Tepedelen) 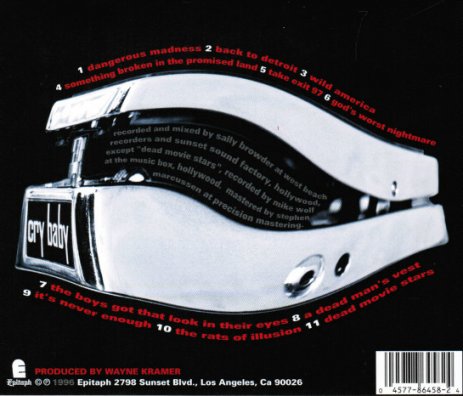 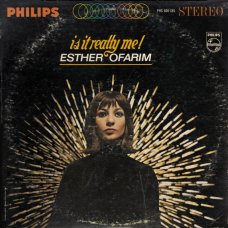 Esther Zaied, better known by her married name Esther Ofarim (Hebrew: אסתר עופרים‎; born June 13, 1941), is an Israeli singer. She came second in the 1963 Eurovision Song Contest with the song “T’en va pas”, representing Switzerland. After marrying Abi Ofarim in 1958, she was half of the husband-and-wife folk duo Esther & Abi Ofarim in the 1960s. After the couple divorced, she undertook a successful solo career.

Esther Zaied was born in Safed to a Syrian Jewish family. She began performing as a child, singing Hebrew and international folk songs. In 1958, Esther met Abi Ofarim, a guitarist and dancer, whom she later married. She was a student in his dance studio in Haifa. Esther served four months in the Israeli Army before she was released due to her marriage to Abi.

American director Otto Preminger cast Esther for a small role in the film Exodus (1960). In 1960, Esther landed the role of Katzia in the play The Legend of Three and Four at the Habima Theatre. In 1961, she won first at Israel’s first pop song festival in Tel Aviv, where she sang “Saëni Imchá Bemachol” (Take Me with You When You Dance) and “Naamah”, written by Pnina and Tsvi Avni, accompanied by Kol Yisrael orchestra under Gary Bertini.

In 1962, Esther released her self-titled debut solo album and was invited to join Frank Sinatra in his performances in Israel. Kol Yisrael radio then sent her to the Sopot International Song Festival in Poland. She came in second place for singing “Stav”, written by Moshe Wilensky and Shimshon Halfi.

Esther and Abi settled in Geneva, Switzerland, where she took part in the 1963 Eurovision Song Contest representing Switzerland with the song “T’en va pas”. In a very close and controversial competition with the Danish duo Grethe and Jørgen Ingmann, her song placed second. Initially it appeared Switzerland had won the contest with 42 points to Denmark’s 40, but after an apparent change to the Norwegian scores, Ofarim ended up with 40 points, as opposed to 42 points for “Dansevise”, a reversal of the initial result.

In 1963, Esther had a starring role in the German film Es war mir ein Vergnügen.

In 1963 and 1964, Esther and Abi had success on the charts in Europe. In the fall of 1964, Esther embarked on a tour of the United States with the Smothers Brothers. Speaking about a performance at Oregon State University in Corvallis, Oregon. Jim Albright, campus correspondent, stated: Everyone expected the Smother Brothers to be great, but Ester [sic] turned out to be fabulous…people were amazed with her singing and her looks.”

By 1965, Esther was well known throughout Europe. She headlined in the major concert halls and theaters. She starred in German films and had her own television specials on BBC and Eurovision. For some time, Esther and Abi’s records were banned on radio stations in Israel due to Germany–Israel relations.

In 1966, Abi and Ofarim had their first hit with “Noch einen Tanz”, an English version of which, “One More Dance”, was a hit in the UK two years later, peaking at No. 13.[11] Their greatest success in Germany was in 1967 with “Morning of My Life”, which was written by the Bee Gees. In 1968 “Cinderella Rockefella” hit the top of the charts in a number of countries including the UK. They performed live concerts in New York City and London, and they toured Europe before separating in 1969.

Esther began recording as a solo artist in the early 1960s. She often sang in different languages. In 1967, she recorded, Esther im Kinderland, in which she sang 20 children’s songs from eight countries in six different languages. After her divorce from Abi, she continued performing and released several albums.

On 25 February 1970, she co-starred in her own BBC television special The Young Generation Meet Esther Ofarim broadcast on BBC1.

In 1982, she released the album Complicated Ladies on Mercury Records with Eberhard Schoener, Wolf Wondratschek, and Ulf Miehe.

In 1984, she played in Joshua Sobol’s play Ghetto, produced by Peter Zadek in Berlin. There she sang songs including “Frühling” and “Unter deinen weissen Sternen”. Her songs were featured in the 2004 Israeli film, Walk on Water.

Esther later married assistant television director Philipp von Sell, who is 18 years her junior. They had a son, David von Sell, born in New York in 1983. Esther and Philipp divorced when David was nine. David is a musician, he attended Berklee College of Music in Boston. (wikipedia)

This is her only American recording by Esther Ofarim nd the album is brilliant. Unfortunately, as was the case with the original LP in 1965 … overlooked in the U.S.

Consisting mostly of American showtunes and standards, it is a departure for Ofarim… and a thrilling CD. With soaring arrangements by Bobby Scott, it is not only a departure for her, it is a peak.

The title song of the original LP, “Is It Really Me” is the definitive version of a long-overlooked beautifully pensive ballad from the Broadway show “110 in the Shade” which with its recent revival at the Roundabout in New York deserves another listen. 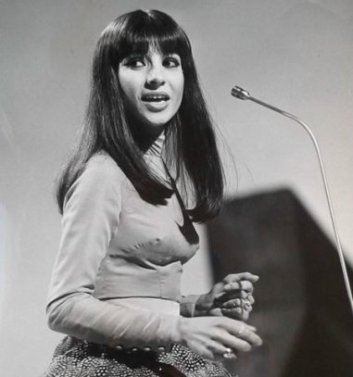 The other songs are equally impressive. Listen – it is the very top in female singing – and comparable to the impact of early Streisand in her first several albums. (by AGVA)

What a terrific voice this woman has and there’s something very emotional about her singing and interpretations. It doesn’t hurt that she has the backing band of Bobby Scott, who’s great (and the composer of the best track on the album, A Taste of Honey). But Is It Really Me is glorious, and her Somewhere became an instant favorite. She has a bit of Barbra in her on her top end, but there’s a freshness here that I just respond to. (by A. Film Lover)