Nicola Conte is an Italian DJ, producer, guitarist, and bandleader, known initially for introducing an innovative style of acid jazz that incorporates bossa nova themes, melodies drawn from Italian film scores of the 1960s, easy listening themes, and traditional Indian music. Recently, he has focused much more on Latin jazz. This focus is evident in his albums Other Directions (2004, Blue Note & Schema) and Rituals (2008, Schema), and many remixes he has done for contemporaries stretching across many closely related genres.

Conte, a classically trained musician, is an innovative jazz revivalist and part of what was termed “The Fez Collective”, based in the Apulian city of Bari, and the Idizioni-Ishtar/Schema Records, a record label known for promoting a distinctly Italian approach to acid jazz as well as jazz music as a whole.

Conte’s first album was Jet Sounds (2000). The single “Bossa Per Due” gained international recognition and was an underground hit. It was used within a short time for a prime-time commercial for Acura automobiles. In 2002, the title track also gained recognition in the United States after it was used in two popular commercial advertisements for Joe Boxer underwear being sold by K-Mart stores. The album was licensed for US distribution by Thievery Corporation’s Eighteenth Street Lounge (ESL) label in the summer of 2001 as Bossa Per Due (2001), and was a slightly reconfigured version of the Italian Jet Sounds album. This was followed by the remix album Jet Sounds Revisited (2002). Two years later, Blue Note’s French subsidiary released Conte’s next album Other Directions (2004). Conte released his next album, Rituals (2008).

Conte released The Modern Sound of Nicola Conte – Versions in Jazz-Dub (2009) on Schema Records. Unlike his 2002 remix album which featured artists largely reworking his songs, this two-CD set had Nicola releasing original titles and featured some of his jazz styled remixes of other people’s works. 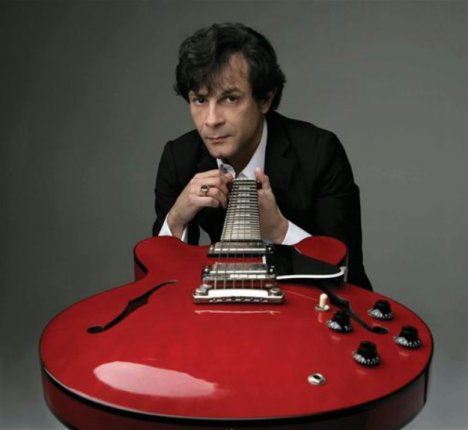 And here´s the first part of his great trilogy called “A Collection Of 60’s Brazilian Bossa Nova & Jazz Samba”:

As “happiness is like a leaf carried by the wind trhough the air”, the music of VIAGEM portray´s the Brasilian moods of mid 60´s, a vibe that swings gently from bossa nova tunes to the more hard edged jazz samba works.A hybrid which blend´s muic of south and north Amberica, Africa and Europe in a poetic, inzteööectual, most unique was.

This collection is a declaration of love for the great musicians, composers and singers who ceated it, a sublime sound which … travelled like a soft breeze tjhrough the time and years …  (Nicola Conte) 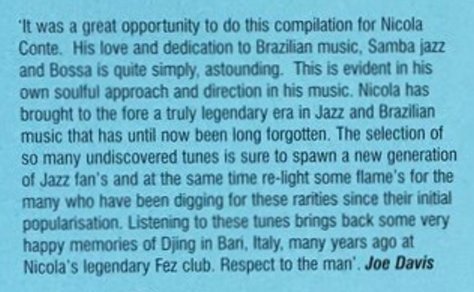