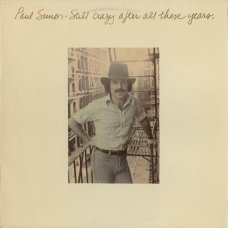 Paul Frederic Simon (born October 13, 1941) is an American musician, singer, songwriter, actor and producer. Simon’s musical career has spanned over six decades. He is widely regarded as one of the best songwriters in popular music history.

Simon formed the duo Simon & Garfunkel with his schoolfriend Art Garfunkel in 1956. They released five studio albums and became one of the most acclaimed groups of the 1960s. Simon composed nearly all of their songs, including “The Sound of Silence”, “Mrs. Robinson”, “America”, “Bridge over Troubled Water”, and “The Boxer”.

After Simon & Garfunkel split in 1970, Simon recorded three acclaimed albums over the following five years, all of which charted in the top 5 on the Billboard 200. His 1972 self-titled album contained the hit songs “Mother and Child Reunion” and “Me and Julio Down by the Schoolyard”. The 1975 album Still Crazy After All These Years, which featured guest vocals from Garfunkel, was his first number-one solo album, and featured the number 1 hit single “50 Ways to Leave Your Lover”, among other top-40 songs such as “Still Crazy After All These Years”, “Gone at Last”, and “My Little Town”.

Simon reunited with Garfunkel for a performance in New York Central Park in 1981, drawing half a million spectators, followed by a world tour with Garfunkel. After a career slump, Simon released Graceland, an album inspired by South African township music, which sold 14 million copies worldwide and remains his most popular and acclaimed solo work. A number of hit singles were released from the album, including “You Can Call Me Al”, “The Boy in the Bubble”, and “Diamonds on the Soles of Her Shoes”. It won the Grammy Award for Album of the Year in 1987. 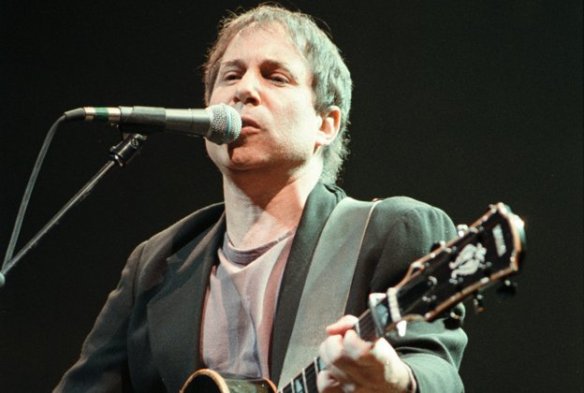 Simon continued to tour throughout the 1990s, wrote a Broadway musical, The Capeman, and recorded a companion album, Songs from The Capeman which was released in 1997. His 2000 album You’re the One was nominated again for Album of the Year honors. He followed that album up with several years of touring, including another reunion tour with Garfunkel, and released Surprise, his last album of the decade, in 2006. In 2016 he released Stranger to Stranger, which debuted at number 3 on the Billboard Album Chart and number 1 the UK Albums Chart, and marked his greatest commercial and critical success in thirty years. His most recent album is 2018’s In the Blue Light, which contains re-arrangements of lesser-known songs from his prior albums.

Simon has earned sixteen Grammy Awards for his solo and collaborative work, including three for Album of the Year (Bridge Over Troubled Water, Still Crazy After All These Years, and Graceland), and a Lifetime Achievement Award. He is a two-time inductee into the Rock and Roll Hall of Fame: first in 1990 as a member of Simon & Garfunkel and again in 2001 for his solo career. In 2006 he was selected as one of the “100 People Who Shaped the World” by Time. In 2011, Rolling Stone named Simon one of the 100 greatest guitarists, and in 2015 he was ranked eighth in their list of the 100 Greatest Songwriters of All Time.[8imon was the first recipient of the Library of Congress’s Gershwin Prize for Popular Song in 2007. 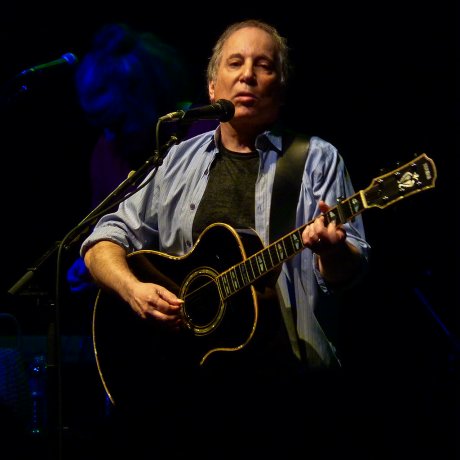 “My Little Town” reunited Simon with former partner Art Garfunkel for the first time since 1970, while “Gone at Last” was a duet between Simon and Phoebe Snow. Several tracks featured members of the Muscle Shoals Rhythm Section as a backing band.

The title track has been recorded by Rosemary Clooney (on her 1993 album Still on the Road), Ray Charles (on his 1993 album My World), Karen Carpenter (on her self-titled solo album released posthumously in 1996), and Willie Nelson (on the soundtrack of the 2000 motion picture Space Cowboys). (wikipedia)

The third new studio album of Paul Simon’s post-Simon & Garfunkel career was a musical and lyrical change of pace from his first two, Paul Simon and There Goes Rhymin’ Simon. Where Simon had taken an eclectic approach before, delving into a variety of musical styles and recording all over the world, Still Crazy found him working for the most part with a group of jazz-pop New York session players, though he did do a couple of tracks (“My Little Town” and “Still Crazy After All These Years”) with the Muscle Shoals rhythm section that had appeared on Rhymin’ Simon and another (“Gone at Last”) returned to the gospel style of earlier songs like “Loves Me Like a Rock.” Of course, “My Little Town” also marked a return to working with Art Garfunkel, and another Top Ten entry for S&G.

The labels from the German edition (REO): 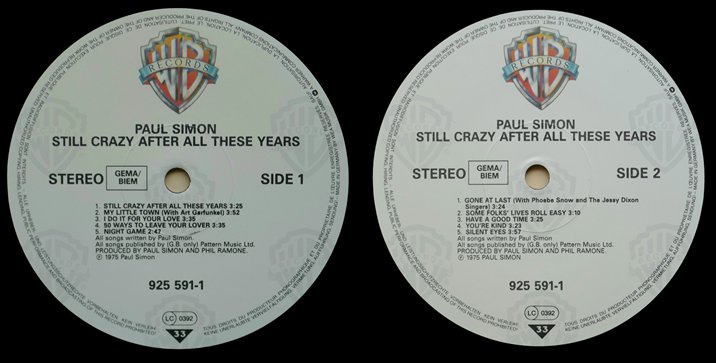 But the overall feel of Still Crazy was of a jazzy style subtly augmented with strings and horns. Perhaps more striking, however, was Simon’s lyrical approach. Where Rhymin’ Simon was the work of a confident family man, Still Crazy came off as a post-divorce album, its songs reeking of smug self-satisfaction and romantic disillusionment. At their best, such sentiments were undercut by humor and made palatable by musical hooks, as on “50 Ways to Leave Your Lover,” which became the biggest solo hit of Simon’s career. But elsewhere, as on “Have a Good Time,” the singer’s cynicism seemed unearned. Still, as out of sorts as Simon may have been, he was never more in tune with his audience: Still Crazy topped the charts, spawned four Top 40 hits, and won Grammys for Song of the Year and Best Vocal Performance. (by William Ruhlmann) 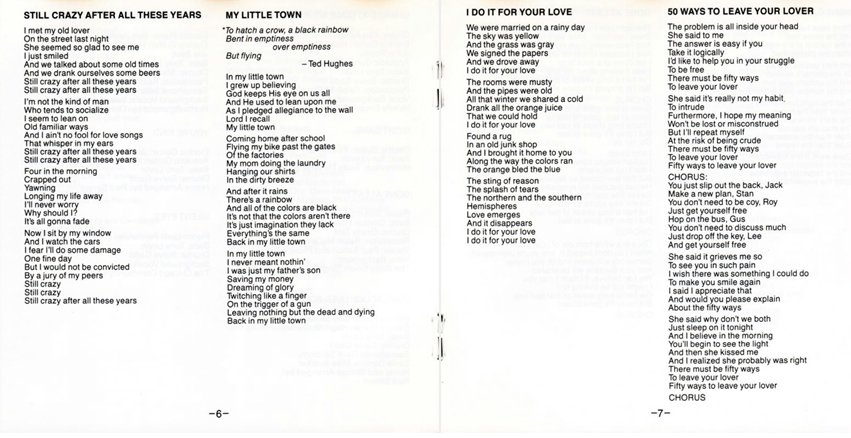 All songs written by Paul Simon 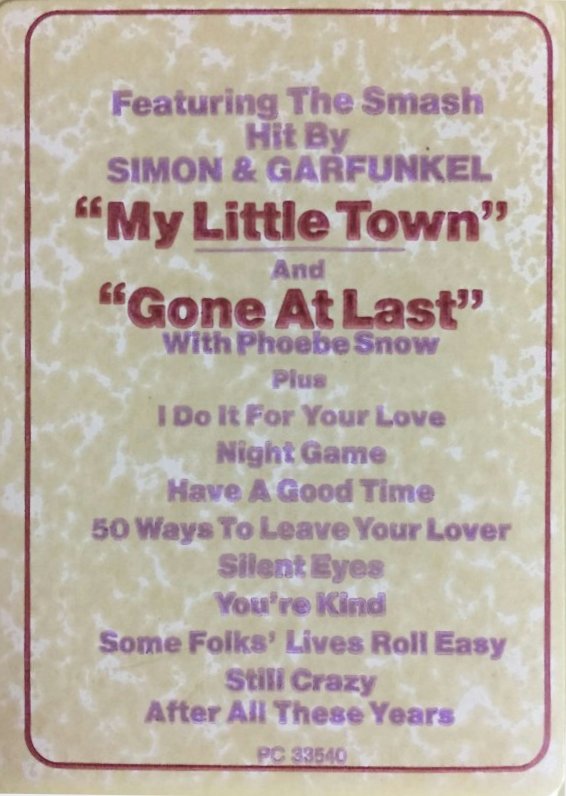 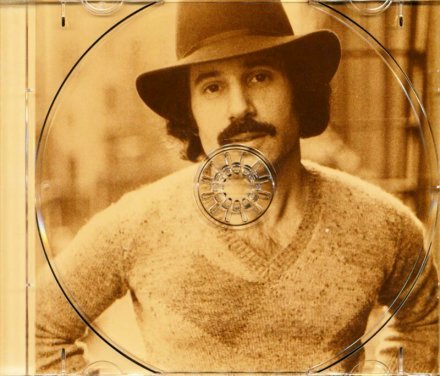