Brown’s date and place of birth are uncertain; many sources state that he was born in 1910 in Walnut Ridge, Arkansas, but the researchers Bob Eagle and Eric LeBlanc suggest that he was born in 1903 or 1904, in Jackson, Tennessee, on the basis of Social Security information. He was reputedly the half-brother of Big Bill Broonzy. He moved to Memphis, Tennessee, in the 1920s, performing as a street musician with Sleepy John Estes and Hammie Nixon. He moved to Chicago in 1932, performing regularly with Broonzy and other musicians, including Memphis Slim and Tampa Red, in many recording sessions for Lester Melrose of Bluebird Records.

In 1935, he began recording in his own right for both Bluebird and Vocalion Records, becoming one of the most popular Chicago blues performers of the late 1930s and 1940s, selling numerous records and playing to packed audiences. He recorded over 160 tracks in those decades. His strong voice and songwriting talent overcame his stylistic limitations.

By the 1950s, his audience had begun to shrink, largely because he had difficulty adapting to the new electric blues. His final recording session, for RCA Victor, was in 1949. He retired from music for several years and became a Chicago police officer. He recorded a session in 1953 with Broonzy and Memphis Slim. Samuel Charters included Brown’s “I’ve Been Treated Wrong” on the compilation album The Country Blues for Folkways Records in 1959. Brown made a modest and short-lived comeback as a live performer in the early 1960s.

He died of heart disease in Chicago, in November 1966, and was buried in an unmarked grave at the Washington Memory Gardens Cemetery, in Homewood, Illinois.

On June 25, 2019, The New York Times Magazine listed Washboard Sam among hundreds of artists whose material was reportedly destroyed in the 2008 Universal fire.

A concert organized by the executive producer Steve Salter, of the Killer Blues organization,[9] was held on September 18, 2009, at the Howmet Playhouse Theater,[10] in Whitehall, Michigan, to raise monies for a headstone for Washboard Sam’s grave. The show was a success, and a headstone was placed in October 2009. The concert was recorded by Vinyl Wall Productions and filmed for television broadcast in the central Michigan area by a television crew from Central Michigan University. It featured musical artists such as Washboard Jo and R.B. and Co. and was headlined by the Big House Blues Band. (wikipedia)

And here´a a pretty good sampler (from Austria !) with the early songs from Washboard Sam … and you hear the roots of th urban blues … 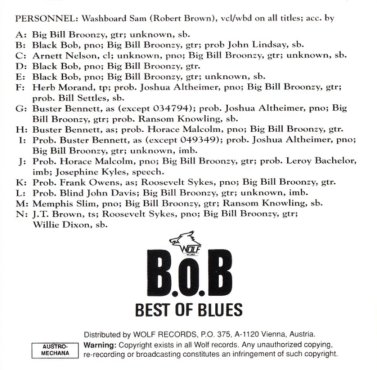 ZZ Top call themselves “that little ol’ band from Texas,” a deceptively clever designation that explains everything about the trio while underselling their deep idiosyncrasies. At their core, the trio of Billy Gibbons, Frank Beard, and Dusty Hill were a down-and-dirty blues band from Houston, cranking out greasy rockers and slyly sleazy boogies about “Tush,” a “Pearl Necklace,” and “Legs.” Despite their deep roots in American rock & roll and blues, ZZ Top were the furthest thing from purists. During their hot streak — which ran all the way from the mid-’70s through the mid-’80s –- there wasn’t a fad they didn’t exploit, twisting new wave, synthesized dance-rock, and music videos for their own purposes. Throughout it all, they wrapped all their hooks and riffs up in a smile disguised by bushy beards and flashy showmanship that not only earned the group a massive audience, but endured well into the 21st century, when they were surrounded by disciples and acolytes, proof that they were a beloved American musical institution.

El Loco is the seventh studio album by the American rock band ZZ Top, released in 1981. The title means “The Crazy One” in Spanish. The band’s guitarist/singer Billy Gibbons has said that the recording of this album was the first time the three members of the band were isolated from one another in the studio, rather than recording simultaneously in the same room. It also foreshadowed ZZ Top’s synthesizer-driven direction later in the decade, with early experimentations in synthesizer backing on certain tracks.

El Loco was produced by Bill Ham and recorded and originally mixed by Terry Manning. The biographer David Blayney explains in his book Sharp Dressed Men that the recording engineer Linden Hudson was involved as a pre-producer on this album.[5] Hudson did not receive credit for engineering the tracks on “Groovy Little Hippie Pad” which were used on the final album mix. In 1987, most of the band’s back catalog received a controversial “digitally enhanced” remix treatment for CD release; however, El Loco did not receive this remix treatment and the original mix of the album has been available on CD since 1987.

On June 3, 2013, Gibbons told Joe Bosso of MusicRadar.com that the album was “a really interesting turning point”, explaining that the band had “befriended somebody who would become an influential associate, a guy named Linden Hudson. He was a gifted songwriter and had production skills that were leading the pack at times. He brought some elements to the forefront that helped reshape what ZZ Top were doing, starting in the studio and eventually to the live stage. [He] had no fear and was eager to experiment in ways that would frighten most bands. But we followed suit, and the synthesizers started to show up on record. Manufacturers were looking for ways to stimulate sales, and these instruments started appearing on the market. One of our favorite tracks was “Groovy Little Hippie Pad”. Right at the very opening, there it is – the heavy sound of a synthesizer. For us, there was no turning back.”[6] Gibbons would later cite seeing a Devo soundcheck in Houston as inspiring the synthesizer line on “Groovy Little Hippie Pad.” (wikipedia) 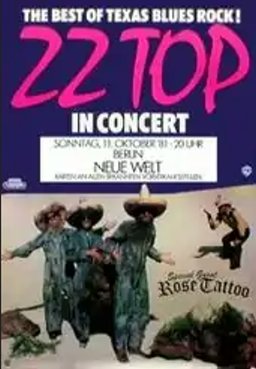 El Loco follows through on the streamlined, jet-engine boogie rock of Degüello, but kicking all the ingredients up a notch. That means that the grooves are getting a little slicker, while the jokes are getting a little sillier, a little raunchier. The double entendres on “Tube Snake Boogie” and “Pearl Necklace” are barely disguised, while much of the record plays as flat-out goofy party rock. Not necessarily a bad thing, but much of it is a little too obvious to be totally winning. Still, the most telling thing about El Loco may be the rhythm of “Pearl Necklace,” its biggest single and best song, which clearly points the way to the new wave blues-rock of Eliminator. (Stephen Thomas Erlewine)

If you thought Deguello was slick, you haven’t heard El Loco. The music is fast, sleazy, and full of what would be the sound of ZZ Top in the 80s. It has a pace you have to listen closely to just to keep up. It’s a record of energy, full of the cleverest lyrics the band had come up with to date. Most importantly, it furthers the direction ZZ Top had taken with Deguello and would carry through to the early 90s. Key tracks are Tube Snake Boogie, Leila, and Pearl Necklace. (Heath Bartlett) 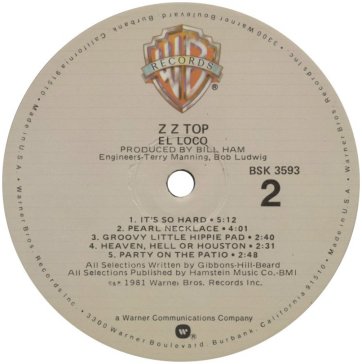