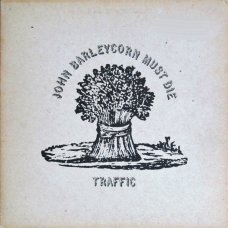 Traffic were an English rock band, formed in Birmingham, in April 1967 by Steve Winwood, Jim Capaldi, Chris Wood and Dave Mason. They began as a psychedelic rock group and diversified their sound through the use of instruments such as keyboards, like the Mellotron and harpsichord, sitar, and various reed instruments, and by incorporating jazz and improvisational techniques in their music.

Initially, they released three non-album singles, including “Paper Sun”, “Hole in My Shoe”, and “Here We Go Round the Mulberry Bush” in early and mid 1967. Their first full album Mr. Fantasy was released in December of that year, and while it was never released as a single, the track “Dear Mr. Fantasy” from the album became a signature song for the band. Dave Mason quit the band shortly after the release of the first album. He rejoined briefly during the recording sessions for the band’s self-titled second album, but was in and out of the group at various times over the next several years. The three-piece Traffic (with Mason appearing in limited capacity) released one more album, 1969’s Last Exit, which contained only one side of new studio material. They disbanded in 1969 when Winwood co-founded the short-lived supergroup Blind Faith, with Eric Clapton, Ginger Baker, and Ric Grech.

They then reunited in 1970 to release the album John Barleycorn Must Die, their highest charting album in the U.S. In 1971, the band reshuffled the lineup for the album The Low Spark of High Heeled Boys, with Capaldi moving to secondary percussionist and backing vocalist as the band added drummer Jim Gordon, percussionist Rebop Kwaku Baah, and bassist Ric Grech to the official line-up. For their next album, 1973’s Shoot Out at the Fantasy Factory, Gordon and Grech were replaced by members of the Muscle Shoals Rhythm Section, Roger Hawkins and David Hood respectively. For their next studio album, 1974’s When the Eagle Flies, Capaldi had returned to the drum kit, bassist Rosko Gee had replaced Hood, and Rebop Kwaku Baah had left.

The band broke up shortly thereafter. A partial reunion, with Winwood and Capaldi alongside several new musicians, took place in 1994. In the intervening years Steve Winwood had a successful solo career, with several hit singles and albums during the 1980s. Dave Mason had his own solo career that produced a few minor hit songs in the 1970s, played as a session musician with a number of bands, and was briefly a member of Fleetwood Mac in 1995 and Ringo Starr & His All Starr Band in 1997. Jim Capaldi also had some minor solo hits in the 1970s in his native UK but was less successful abroad. During the 1990s, Capaldi primarily worked as a songwriter, working with Santana and The Eagles. Chris Wood did sporadic session work after the breakup of Traffic in 1974, and died in 1983.

Traffic were inducted into the Rock and Roll Hall of Fame in 2004.

John Barleycorn Must Die is the fourth studio album by English rock band Traffic, released in 1970 as Island ILPS 9116 in the United Kingdom, United Artists UAS 5504 in the United States, and as Polydor 2334 013 in Canada. It marked the band’s comeback after a brief disbandment, and peaked at number 5 on the Billboard 200, making it their highest-charting album in the US, and has been certified a gold record by the RIAA. In addition, the single “Empty Pages” spent eight weeks on the Billboard Hot 100, peaking at number 74. The album was marginally less successful in the UK, reaching number 11 on the UK Albums 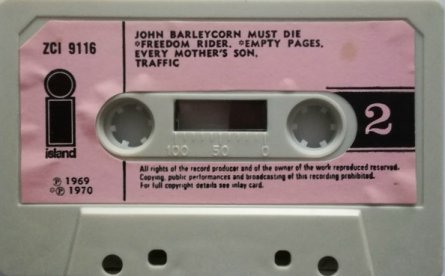 At the beginning of 1970, after the demise of Blind Faith, Winwood returned to the studio ostensibly to make his first solo album, originally to be titled Mad Shadows. He recorded two tracks with producer Guy Stevens, “Stranger to Himself” and “Every Mother’s Son”, but yearned for like-minded musicians to accompany, inviting Wood and Capaldi to join him. Thus Winwood’s erstwhile solo album became the reunion of Traffic (minus Dave Mason), and a re-launch of the band’s career. Mad Shadows would go on to be the title of Mott the Hoople’s second album, also produced by Guy Stevens, and the new Winwood/Traffic album took its title from one of its tracks and became John Barleycorn Must Die.

As did most of their albums, this one featured influences from jazz and blues, but the version of the traditional English folk tune that provided the album’s title, “John Barleycorn”, also showed the musicians attending to a modern interpretation of traditional folk music in the vein of contemporary British bands Pentangle and Fairport Convention.

The album was reissued for compact disc in the UK on 1 November 1999, with five bonus tracks, including three recorded in concert from the Fillmore East in New York City. In the US, the remastered reissue of 27 February 2001 included only the two studio bonus tracks.

Steve Winwood oversaw a deluxe edition that was released on 15 March 2011, featuring the original studio album, digitally remastered on disc one, plus a second disc of bonus material, including more of the Fillmore East concert, with alternate mixes and versions of album tracks.

The original LP release of the album had the front cover design on a background consisting of a photograph of burlap. Later LP copies had the design on a grey background. The cover is displayed prominently during a party scene in the 1971 movie by Dario Argento, Four Flies on Grey Velvet. (wikipedia)

At only 22 years old, Steve Winwood sat down in early 1970 to fulfill a contractual commitment by making his first solo album, on which he intended to play all the instruments himself. The record got as far as one backing track produced by Guy Stevens, “Stranger to Himself,” before Winwood called his erstwhile partner from Traffic, Jim Capaldi, in to help out. The two completed a second track, “Every Mother’s Son,” then, with Winwood and Island Records chief Chris Blackwell moving to the production chores, brought in a third Traffic member, Chris Wood, to work on the sessions. Thus, Traffic, dead and buried for more than a year, was reborn. The band’s new approach was closer to what it perhaps should have been back in 1967, basically a showcase for Winwood’s voice and instrumental work, with Wood adding reed parts and Capaldi drumming and occasionally singing harmony vocals.

If the original Traffic bowed to the perceived commercial necessity of crafting hit singles, the new Traffic was more interested in stretching out. Heretofore, no studio recording had run longer than the five-and-a-half minutes of “Dear Mr. Fantasy,” but four of the six selections on John Barleycorn Must Die exceeded six minutes. Winwood and company used the time to play extended instrumental variations on compelling folk- and jazz-derived riffs. Five of the six songs had lyrics, and their tone of disaffection was typical of earlier Capaldi sentiments. But the vocal sections of the songs merely served as excuses for Winwood to exercise his expressive voice as punctuation to the extended instrumental sections. As such, John Barleycorn Must Die moved beyond the jamming that had characterized some of Traffic’s 1968 work to approach the emerging field of jazz-rock. And that helped the band to achieve its commercial potential; this became Traffic’s first gold album. (by William Ruhlmann) 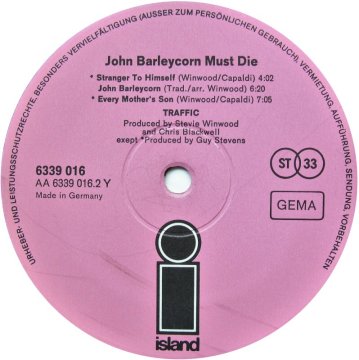