A mezzo-soprano, lang has contributed songs to movie soundtracks and has collaborated with musicians such as Roy Orbison, Tony Bennett, Elton John, The Killers, Anne Murray, Ann Wilson, and Jane Siberry. She performed at the closing ceremony of the 1988 Winter Olympics in Calgary, Alberta, and at the opening ceremony of the 2010 Winter Olympics in Vancouver, British Columbia, where she performed Leonard Cohen’s “Hallelujah”.

Lang has also been active as an animal rights, gay rights, and Tibetan human rights activist. She is a tantric practitioner of the old school of Tibetan Buddhism.

In a Rolling Stone review, Barry Walters wrote “The rhythms and sonic textures draw from the vintage soul of Al Green, while the stark arrangements and lush melodies embrace the primal sophistication of trend-bucking college-radio faves like Björk and [PJ] Harvey without evoking either. By holding back on vocal volume and letting her creativity loose, Kathryn Dawn ultimately expresses much more. Traditional torch and twang gave her something to master and rebel against, but sublimely sensual art pop has set lang free.”

David Browne of Entertainment Weekly described the album as “Ten meditations on unrequited desire, courtship, rejection, and sex, All You Can Eat is both the most brazen and conventional album she’s ever made, and one of her best. With each new album, lang has gradually toned down the often cloying cowpunk giddiness of her early work. That course continues with Eat, a sober album that musically and lyrically picks up where Ingénue‘s hit ‘Constant Craving’ left off. The songs are a series of pleas to a lover to allow our tortured chanteuse into her life, each one highlighting varying degrees of optimism, confusion, and bleakness.”

k.d. lang followed through on the promise of her adult contemporary changeover Ingénue with All You Can Eat. A more experimental and realized record than its predecessor, there are more daring production touches on All You Can Eat — it’s clear that she has been listening to contemporary pop, not just torch songs. It isn’t immediately accessible — the production is low-key, the melodies are gentle and subtle (although her cutesy, tongue-in-cheek song titles suggest otherwise), and lang gives a nuanced, sophisticated performance. Though it lacks a standout song like the aching “Constant Craving,” All You Can Eat has a more consistent set of songs and, given time, is a more rewarding listen. (by Stephen Thomas Erlewine) 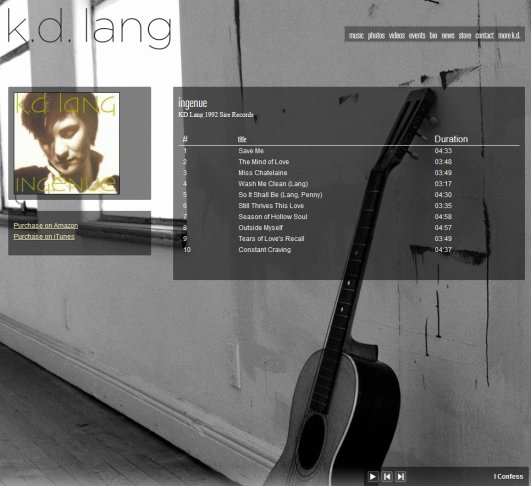