Jamesetta Hawkins (January 25, 1938 – January 20, 2012), known professionally as Etta James, was an American singer who performed in various genres, including gospel, blues, jazz, R&B, rock and roll, and soul. Starting her career in 1954, she gained fame with hits such as “The Wallflower”, “At Last”, “Tell Mama”, “Something’s Got a Hold on Me”, and “I’d Rather Go Blind”.

She faced a number of personal problems, including heroin addiction, severe physical abuse, and incarceration, before making a musical comeback in the late 1980s with the album Seven Year Itch.

And here you can read more about Etta James.

The Second Time Around is the second studio album by the American blues artist Etta James. The album was released in 1961 on Argo Records. It was produced by Phil and Leonard Chess, who also produced her previous album. Riley Hampton was the arranger and orchestra conductor.

The Second Time Around was originally released by Argo Records as a 12-inch LP, containing five tracks on each side of the LP (with ten tracks overall). Like her previous album, At Last!, the producers, Phil and Leonard Chess, added orchestral strings to the background music of James’s voice, which garnered Pop crossover appeal. The album spawned three singles: “Don’t Cry Baby” (#6), “The Fool That I Am” (#14) and “Seven Day Fool” (#95), which all became major hits on the Hot Rhythm Blues Records and Billboard Pop Chart in 1961. The album includes covers of pop and jazz standards such as, “Dream.”[8][9] The album was re-issued as a compact disc on MCA/Chess in 1999, however unlike her previous album which was also re-issued, The Second Time Around did not include any additional bonus tracks. (wikipedia)

Etta James’s second album isn’t what you pull off the shelf when you want to hear her belt some soul. Like her debut, it found Chess presenting her as more or less a pop singer, using orchestration arranged and conducted by Riley Hampton, and mostly tackling popular standards of the ’40s. If you’re not a purist, this approach won’t bother you in the least; James sings with gusto, proving that she could more than hold her own in this idiom as well. R&B isn’t entirely neglected either, with the rousing “Seven Day Fool” (co-written by Berry Gordy, Jr.) a standout; “Don’t Cry Baby” and “Fool That I Am” were R&B hits that made a mild impression on the pop charts as well. (by Richie Unterberger) 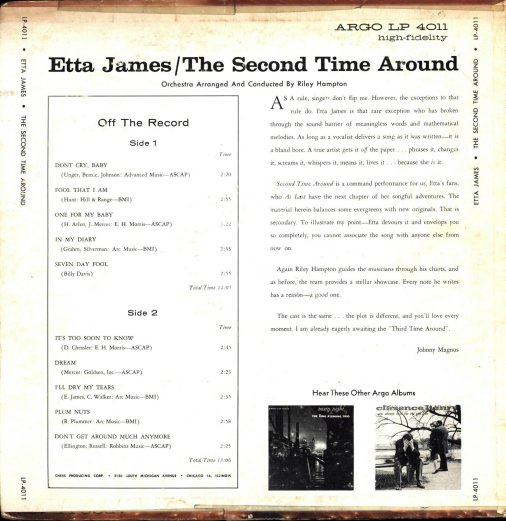