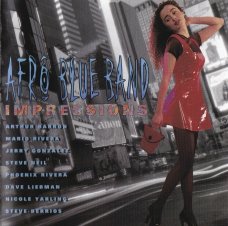 The Afro Blue Band is actually a series of bands drawn from a pool of 15 musicians under the overall direction of saxophonist/Miami nightclub owner Arthur Barron, who has pulled a series of mostly hot Latin jazz performances out of the mix. Barron appears on most of the tracks, his workaday tenor and alto sharing the spotlight with the more coherent, impassioned work of Mario Rivera on soprano, tenor, flute, and cornet, Dave Liebman’s soprano, Melton Mustafa’s trumpet, Papo Vasquez’s trombone, and Mel Martin’s assortment of wind instruments. The only consistent anchors of these bands are Phoenix Rivera (Mario’s son) on drums and Steve Neil on bass, who cook throughout the frequent personnel changes. The pianist is usually Hilton Ruiz, spelled on a few tracks by Mark Levine — and the tough conga work is often in the hands of Jerry Gonzales. With a boiling clutter of Gonzales’ Afro-Cuban percussion work, the collection starts off on the right foot with a great rendition of the title track; it sounds a bit like what Coltrane might have done with the tune had he included it on his “Kulu Se Mama” session. The band’s inspiration, “Afro Blue,” is also very hot, with Mario reaching toward the edge at the close. Overall, the revolving personnel is this album’s strength; the frequent changes of texture and style keeps things fresh and unpredictable. (by by Richard S. Ginell)

Quick and to the Point: Free range testosterone jazz high….

When it was released, much was expected from this album given the talent on the recording. Such prospects were understandably imposed on Impressions. Heavy expectations come with talent and fame. Surely, every fan can come up with examples of jazz notables who failed to deliver according to expectations. This compact disc did not fulfill its potential according to such forecasts. Can we dare, however, let it speak for itself? I believe we must listen.

“Impressions” comes forth as the opener with the most extensive expression in the date. Abstractions eased in free-flowness sail forth, dancing on the elastic guaguancó rhythmic bedrock with abandon. Swing comes over after the initial third of the tune to allow Hilton Ruiz to take off running, although his final effects might had outrun their usefulness. A vocal and violin bridge during the midst of the performance, featuring Nicole Yarling, proves to be the highlight. First impression seems fine: get into the closing groove and get a groove on…

Mongo Santamaría’s classic “Afro Blue” appears yet again. A worthy rendition of this venerable tune enhances any recording or performance. This one is a contribution to the ongoing legacy of its reinterpretation. The mazacote seems fine to me. Mellow-free-relaxed-yellow saxophones overlay the percussive bottom heat.

Ruiz’s opening chord developments in “Tonesville” tip his hat to Eddie Palmieri a couple of times, opening and freeing the tune for the saxophone’s eventual take over. This is driven stuff as Barron and Dave Liebman trade around on tenor and soprano; Phoenix Rivera asserts himself with force on the drums; and Ruiz fingers scales at will. Let freedom rule until the restful release in the end…

More familiar, mainstreamed and restrained within better-known Hispanic musical tendencies is what we get in “Latin Jazzdance.” All three saxophonists trade their heated, abstract and screeching notes, with a piano transition from Ruiz delivering a beautiful flute-sweetened riff as background. 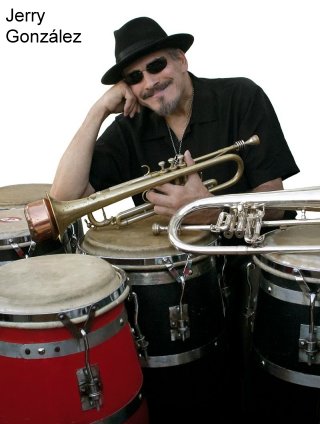 In Impressions, Horace Silver’s “Señor Blues” is a percussive piece in 6/8 with a scattered original sonic imprint. Perhaps Silver could asses its market capitalization value better than me, but I give it a hold rating. Trombonist “Papo” Vásquez appears briefly, although effectively, and the ensuing grooves are fine indeed. Ruiz’s piano playing had its best moment in the date at the hands of “Señor Blues.” Jerry González is the lead of the developmental flow of this reinterpretation.

The trio rendition of Ruiz’s “For Pearl,” featuring Mark Levine’s sense of significant economy in his piano playing, proves to be a delightful passage. Flashes and splashes from the percussive end enhance the aqueous delivery of the alto flute and bass clarinet. Imagine yourself fishing for pearls…

This is a real exciting album … 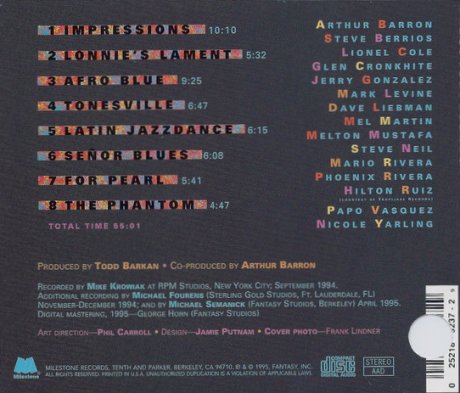