Ellen Ballon  (October 6, 1898 – Montreal, Quebec, Canada – December 21, 1969 – Montreal, Quebec, Canada) was a child prodigy and at the age of six, in the inaugural year of the McGill Cons (1904), won the first director’s scholarship awarded at that school. She studied there with Clara Lichtenstein. As a child Ballon was praised by Josef Hofmann (whose pupil she became later, in Switzerland and again in New York), Adele aus der Ohe, and Raoul Pugno. Artur Rubinstein is said to have declared her ‘the greatest pianistic genius I have ever met’. Following a farewell recital at Royal Victoria College in Montreal 27 Dec 1906 she was sent to New York to study with Rafael Joseffy. She was a child when she made her New York debut in March 1910, playing concertos of Mendelssohn (G minor) and Beethoven (C major) with the New York Symphony under Walter Damrosch. She continued her studies in New York with Josef Hofmann and in Vienna with Wilhelm Backhaus, and when she returned from Europe to play with the New York Philharmonic under Josef Stransky (Saint-Saëns Concerto No. 4, 31 Jan 1921), she was a fully developed concert pianist. However, she continued her studies with Alberto Jonas in New York until at least 1925 and appeared again with the New York Philharmonic in the 1925-6, 1929-30, and 1932-3 seasons. 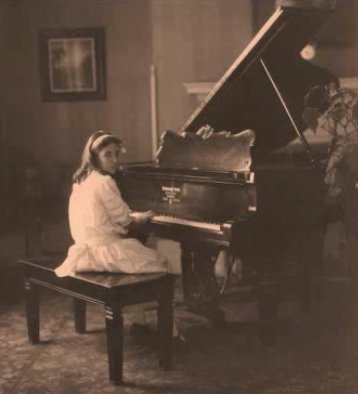 She began her first major European tour in 1927, appearing with the Berlin Philharmonic, the Vienna Philharmonic, and the Amsterdam Concertgebouw orchestras, and then settling in London. She gave private recitals for Princesses Beatrice and Helena Victoria at Kensington Palace, appeared in public recital (eg, International Celebrity Series, 1936-7), and toured in Great Britain and Scandinavia. She returned to North America before the war and eventually settled in Montreal.Long a friend and admirer of the Brazilian composer Heitor Villa-Lobos, she performed many of his works and commissioned his Concerto No. 1, giving the premiere (1946) in Rio de Janeiro under the

composer’s direction. Ballon’s playing was rhythmically secure and, at its best, full of excitement. If her concert career fell somewhat short of the promise shown by her prodigious childhood, it may have been that she was not under pressure to prove herself – a stimulus which most successful pianists experience. She became a person of considerable wealth and was popular in social and artistic circles. In later life she made important contributions to the Faculty of Music at McGill University (where she established a piano scholarship in her own name in 1928) as a philanthropist, as a fund-raiser, and, for a short time, as a teacher. (by thecanadianencyclopedia.com)

And here´s her interpretation of Chopin´s Piano Concerto No. 2 in F minor, Op. 21:

The Piano Concerto No. 2 in F minor, Op. 21, is a piano concerto composed by Frédéric Chopin in 1829. Chopin wrote the piece before he had finished his formal education, at around 20 years of age. It was first performed on 17 March 1830, in Warsaw, Poland, with the composer as soloist. It was the second of his piano concertos to be published (after the Piano Concerto No. 1), and so was designated as “No. 2”, even though it was written first.

The work contains the three movements typical of instrumental concertos of the period:

Larghetto (A flat major): a work of “undescribable beauty”, this music was inspired by Chopin’s distant idolization of Konstancja Gładkowska. The main theme (the “A” section) is introduced by the piano after an orchestral introduction and is later repeated twice and again, at measure 82 (the start of the coda), is enhanced by the sublime entrance of the bassoon in canon, followed by the bassoon transitioning to a counter-melody.

Allegro vivace (F minor): In the finale, the violins and violas are at one point instructed to play col legno (with the wood of the bow). For the piano, the final sections are regarded as extremely technically demanding.

Chopin’s fellow composers and Prof. Elsner’s former students, Ignacy Feliks Dobrzyński (1807-1867) and Tomasz Nidecki (1807-1852), are believed to have helped him orchestrate his piano concertos. This gave an excuse for other musicians to make slight alterations in the score. Alfred Cortot created his own orchestration of the F minor concerto and recorded it with the London Philharmonic Orchestra under John Barbirolli in 1935. Ingolf Wunder recorded Alfred Cortot’s orchestration with minor changes done by himself in 2015. 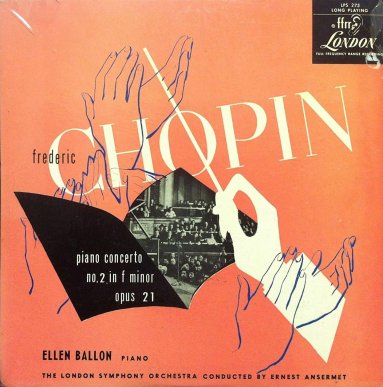 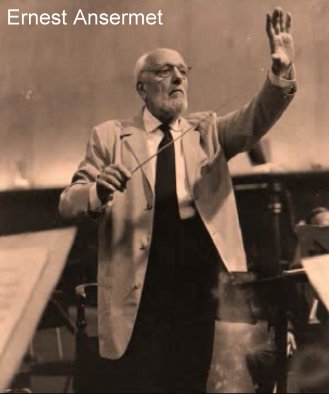 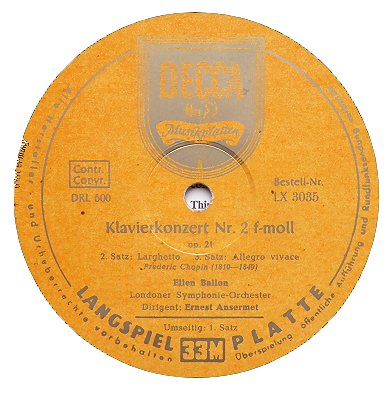 The cover of my issue is from UK, the label from Germany … 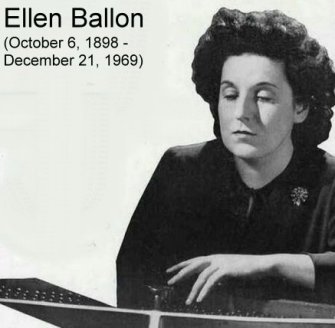