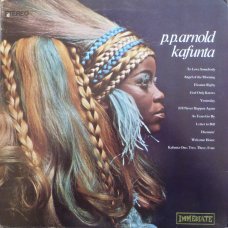 Though it cannot hold a candle to its predecessor, P.P. Arnold’s second and final Immediate album is nevertheless a dramatic offering, its greatest flaws lying more in the conflict between singer and label than in either performance or production. Recorded with Immediate head Andrew Loog Oldham at the controls, Kafunta is riven by his dream of establishing Arnold in the same mass entertainment world as Cilla Black and Lulu, at the same time as Arnold fights to retain her own R&B sensibilities. Occasionally the conflict works well — the MOR heartbreaker “Angel of the Morning” is performed with such a depth

of yearning purpose that no other version on earth will ever sound so majestic. “As Tears Go By,” too, is powerful, Oldham’s third attempt at the song (after Marianne Faithfull and the Rolling Stones) drawing fresh conclusions from that loveliest of melodies, while Spartan accompaniment plays with the ghost of “Lady Jane” behind it. “God Only Knows,” driven by a near-martial accompaniment of trumpets and drums, is even more dramatic — Oldham himself has never made any secret of his love for the song, and the attention lavished on this version sends it soaring up any poll of his greatest productions. Similarly, his reinventions of the songs that every singer of the age apparently tackled — “Yesterday,” “Eleanor Rigby,” and the Bee Gees’ “To Love Somebody” — are wrapped in breathtaking sheen, with “Yesterday” even rivaling Alma Cogan’s definitive rearrangement in terms of freshness and emotional punch. That Arnold herself is often overwhelmed by the strength of the arrangements (carried out by longtime Oldham conspirator John Paul Jones) is neither here nor there; played loud and booming, Kafunta has an impressiveness that doesn’t simply defy criticism, it dismisses it out of hand. (by Dave Thompson)