Mulatu Astatke (born 19 December 1943) is an Ethiopian musician and arranger considered as the father of Ethio-jazz.

Born in the western Ethiopian city of Jimma, Mulatu was musically trained in London, New York City, and Boston where he combined his jazz and Latin music interests with traditional Ethiopian music. Astatke led his band while playing vibraphone and conga drums—instruments that he introduced into Ethiopian popular music—as well as other percussion instruments, keyboards, and organ. His albums focus primarily on instrumental music, and Mulatu appears on all three known albums of instrumentals that were released during Ethiopian Golden 1970s.

Mulatu’s family sent the young Mulatu to learn engineering in Wales during the late 1950s. Instead, he began his education at Lindisfarne College near Wrexham before earning a degree in music through studies at the Trinity College of Music in London. He collaborated with jazz vocalist and percussionist Frank Holder. In the 1960s, Mulatu moved to the United States to enroll at Berklee College of Music in Boston. He studied vibraphone and percussion.

While living in the U.S., Mulatu became interested in Latin jazz and recorded his first two albums, Afro-Latin Soul, Volumes 1 & 2, in New York City in 1966. The records prominently feature Mulatu’s vibraphone, backed by piano and congas playing Latin rhythms, and were entirely instrumental with the exception of the song “I Faram Gami I Faram,” which was sung in Spanish.

In the early 1970s, Mulatu brought his new sound, which he called Ethio-jazz, back to his homeland while continuing to work in the U.S. He collaborated with many notable artists in both countries, arranging and playing on recordings by Mahmoud Ahmed, and appearing as a special guest with Duke Ellington and his band during a tour of Ethiopia in 1973.

Mulatu recorded Mulatu of Ethiopia (1972) in New York City, but most of his music was released by Amha Eshete’s label Amha Records in Addis Ababa, Ethiopia, including several singles, his album Yekatit Ethio Jazz (1974), and six out of the ten tracks on the compilation album Ethiopian Modern Instrumentals Hits. Yekatit Ethio Jazz combined traditional Ethiopian music with American jazz, funk, and soul. 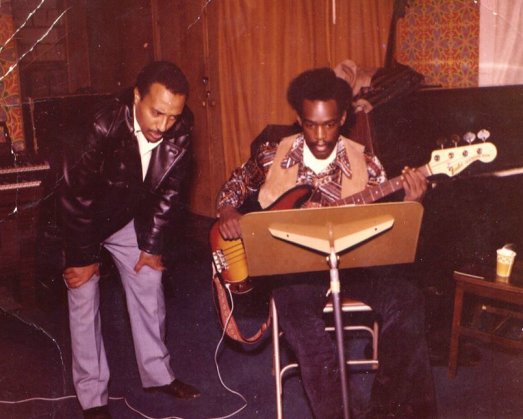 By 1975, Amha Records had ceased production after the Derg military junta forced the label’s owner to flee the country. Mulatu remained to play vibes for Hailu Mergia and the Walias Band’s 1977 album Tche Belew (which included “Musicawi Silt”) before the Wallas also left Ethiopia to tour internationally. By the 1980s, Mulatu’s music was largely forgotten outside of his homeland. 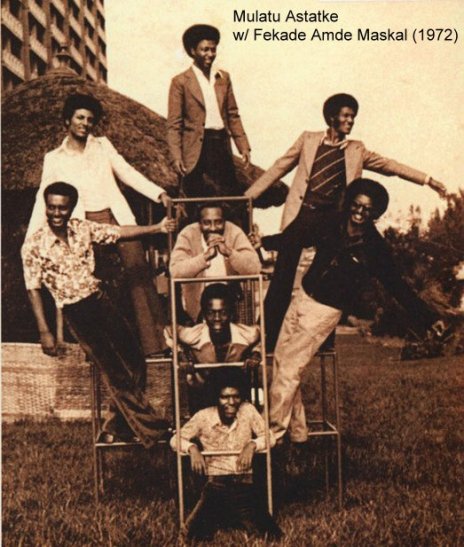 In the early 1990s, many record collectors rediscovered the music of Mulatu Astatke and were combing stashes of vinyl for copies of his 70s releases. In 1998, the Parisian record label Buda Musique began to reissue many of the Amha-era Ethio-jazz recordings on compact disc as part of the series Éthiopiques, and the first of these reissues to be dedicated to a single musician was Éthiopiques Volume 4: Ethio Jazz & Musique Instrumentale, 1969–1974. The album brought Mulatu’s music to an international audience.

Mulatu’s music has had an influence on other musicians from the Horn region, such as K’naan. His Western audience increased when the Broken Flowers (2005) directed by Jim Jarmusch film seven of his songs, including one performed by Cambodian-American rock band Dengue Fever. National Public Radio used his instrumentals as beds under or between pieces, notably on the program This American Life. Samples of his were used by Nas, Damian Marley, Kanye West, Cut Chemist, Quantic, Madlib, and Oddisee. 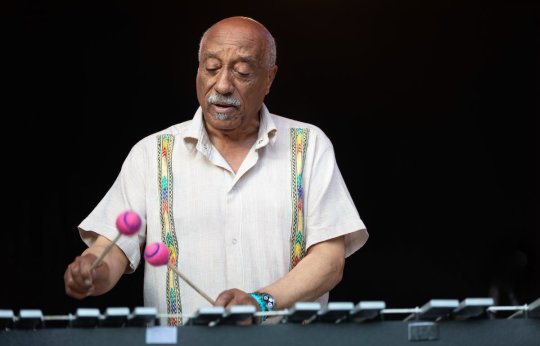 After meeting the Massachusetts-based Either/Orchestra in Addis Ababa in 2004, Mulatu began a collaboration with the band beginning with performances in Scandinavia in summer 2006 and London, New York, Germany, Holland, Glastonbury (UK), Dublin, and Toronto in 2008. In the fall of 2008, he collaborated with the London-based collective The Heliocentrics on the album Inspiration Information Vol. 3, which included re-workings of his Ethio-jazz classics with new material by the Heliocentrics and himself.
Mulatu performs with Black Jesus Experience members Chris Frangou (bass) and Liam Monkhouse (MC) in Addis Ababa in 2015.

In 2008, he completed a Radcliffe Institute Fellowship at Harvard University where he worked on modernization of traditional Ethiopian instruments and premiered a portion of a new opera, The Yared Opera. He served as an Abramowitz Artist-in-Residence at the Massachusetts Institute of Technology, giving lectures and workshops and advising MIT Media Lab on creating a modern version of the krar, a traditional Ethiopian instrument.

On 1 February 2009, Mulatu performed at the Luckman Auditorium in Los Angeles with a band that included Bennie Maupin, Azar Lawrence, and Phil Ranelin. He released a two-disc compilation album to be sold exclusively to passengers of Ethiopian Airlines, with the first disc containing a compilation of styles from different regions of Ethiopia and the second consisting of studio originals. On 12 May 2012, he received an honorary doctor of music degree from the Berklee College of Music.

In 2015, Mulatu began recording with Black Jesus Experience for Cradle of Humanity, which premiered at the Melbourne Jazz Festival in 2016 and was followed by a tour of Australia and New Zealand. (by wikipedia) 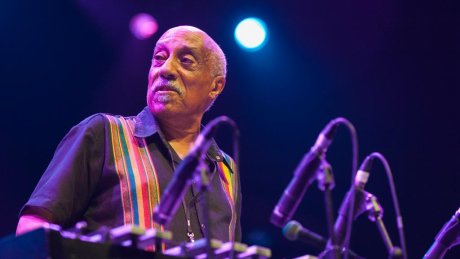 A few years ago, a friend of mine bought me this record for my birthday. My friend knew I had never heard of Mulatu Astatke and his Ethiopian Quintet, but because she used to live with me, knew all about my love for Jazz, Mexicali Brass, Latin Jazz and Afro Funk. In hindsight, she couldn’t really go wrong with this gift, it’s obvious that I would love it and with no surprise at all, I instantly fell in love with this album.

Mulatu Astatke, who was born in 1943 in Ethiopia, is known as the father of Ethio-Jazz. His album, Afro-Latin Soul was recorded in Brooklyn, NYC and was released in 1966 on Worthy Records. This album is almost a 50 year old creation, which speaks volumes to its quality and significance and to the fact that it can still be enjoyed today. If you’ve seen Jim Jarmusch’s film Broken Flowers starring Bill Murray, you’ll be a bit familiar with Mr. Astatke and his Ethiopian Quintet, as their music is found on the majority of the soundtrack and even features three songs off Afro-Latin Soul. I especially like the album art of the record, it’s simple yet eye catching and the informative commentary found on the back of the record sleeve is short and sweet!

“[…] Mulatu a multi-talented musician, composer and arranger, has created a new sound “Afro-Latin Soul”. He has taken the ancient five-tone scale of Asia and Africa and woven them into something unique and exciting; a mixture of three cultures, Ethiopian, Puerto Rican and American.

Mulatu has brought to America a pulsating dance, called the “Skista”. Wherever he plays the “Skista”, it becomes an immediate craze. Louis Rodriguez, the singer, gives a magnificent interpretation in Spanish of an Ethiopian Skista with “I Faram Gami I Faram”.

During the Session, Mulatu masterfully jumps from vibes to piano to drums. Rudy Houston switches from piano to trumpet to give a soul-stirring rendition of a haunting melody. Felix Torres and John Perez, keep up an exciting conga and bongo background along with the real boss bass of Robert Cuadrado and the tremendous tymbali work of Tony Pearson.

This album is one you will always treasure. (by Gil Snapper)

So if you’re like me and felt genuinely offended by this week’s Montreal Weather Network temperature predictions, I have one thing to suggest as a means to cope with the cold – play this gem of an album while drinking a big ass glass of red wine at the end of a long day and enjoy this warm creation indoors!

I Faram Gami I Faram, Mulatu’s Hideaway and A Kiss Before Dawn are my favorites. (by Devon Eye) 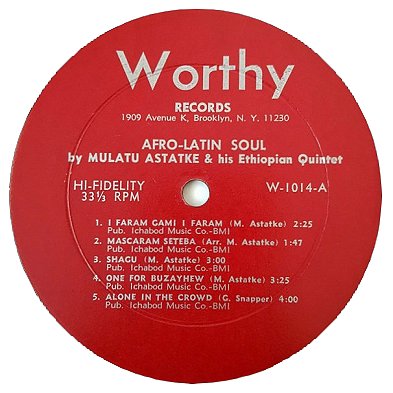