Hi, back from Egypt I will present a wonderful piece of music, wirtten by Michael Atherton:

Emeritus Professor Michael Atherton (nee Jones) AM is an Australian musician, composer, academic and author (born 17 February 1950). Michael Atherton was born in Liverpool, England, of Irish, Welsh and German descent – eldest of five children. His family migrated from England to Australia in 1965 first living in Bunnerong Migrant Hostel, NSW, where he taught himself to play guitar, formed bands and played football with friends of British, Greek and Italian background.

In 1993 Atherton was appointed Foundation Professor of Music at Western Sydney University. He built a teaching and research department that focused on Australian expressions. Subsequently, in 2001 he was appointed inaugural head of the School of Contemporary Arts (Music, Theatre, Dance, Fine Arts & Electronic Arts). Following a University restructure to a college based system, he was appointed Associate Dean of the College of Arts and Social Sciences, responsible for the research portfolio.

Atherton is a composer and performer with broad experience in music for the concert hall, film, television and radio. He toured extensively throughout Asia, Europe, USA and Canada with Sirocco, the Atherton TableBand, and Southern Crossings, supported by Music Viva Australia. He has made numerous CD recordings, documentary film scores

and television themes, including the station music for TVS. Atherton played with the Renaissance Players (1974-1981), Southern Crossings Ensemble (1986-1993) and is currently a member of SynC, an electroacoustic duo. Performance highlights include the Aurora Festival 2008; New Interfaces for Musical Expression (NIME) opening concert, New York, June 2007; and NIME/Agora Resonances, Paris, 2006.

Atherton AM (Medal of the Order of Australia, awarded for services to music education and society) is an elected fellow (FRSA) of the Royal Society of Arts, Manufactures and Commerce. He was awarded an Australian Centenary Medal (2003) by Prime Minister John Howard for service to the community. He achieved a high commendation for research training and supervision in the Vice Chancellor’s Awards for Excellence at Western Sydney University (2008). In 2012, Western Sydney University honoured him with the title, Emeritus Professor, for his distinguished contribution to teaching and research in the field of music and service to the University over many years. Atherton led the establishment of a music therapy clinic and teaching facility at Kinsgwood, NSW. In 2011 he was officially acknowledged by Nordoff-Robbins Music Therapy and the music industry for leadership and support.
Personal life

Atherton is considered a leading expert in Australian made musical instruments and sound producing objects in Oceania. He authored the groundbreaking book Australian Made, Australian Played (1990) and was the contributing curatorial editor for Sounds Unlimited: building the instruments (2003). Music of the Spirit: Asian-Pacific Musical Identity was published in 2009, and Musical Instruments and Sound-Producing Objects of Oceania was published in 2010. A Coveted Possession: the rise and fall of the piano on Australi. (by wikipedia)

The catalyst for Ankh: The Sound of Ancient Egypt was an exhibition—Life and Death in the Land of the Pharaohs, developed by the National Museum of Antiquities in Leiden, The Netherlands. The exhibition came to the Australian Museum in 1998. It provided the challenge of producing a creative reconstruction of ancient Egyptian music and the inspiration for a longer term research project.

The first stage of the project began with a response to the contents of the exhibition itself, followed by a delving into the ever-increasing output of Egyptological scholarship, to establish a broader musical context. The big questions loomed large: what did the music sound like? How were the instruments tuned? Was the music polyphonic? One must proceed by conjecture and deduction, using the literary and visual record in conjunction with an examination of surving instruments. The answers remain elusive, mainly gleaned from instruments housed in museums, along with iconographic and literary evidence. There is no surviving music notation, nor any musical theory which might instruct one about pitch, rhythm and timbre.

In approaching the composition and performance of the music, Michael Atherton drew on his experience in playing medieval monophony, eastern European and Turkish folk music, as well as his participation in intercultural music projects.

Atherton primarily uses 5, 6, and 7 note scales based on specific pitches, resulting in a combination of Moroccan ramal mai mode and Persian afshari. He also gravitates toward pentatonic scales and major modes. The melodies move in small steps. The setting of the hymns is monophonic, with the inclusion of call and response development. Sung items include interpolated recitations, as a means of acknowledging a deep connection between lanuguage and music.

Ankh: The Sound of Ancient Egypt is a contribution to giving a voice to the vivid images of a dynamic musical culture. (by harmonies.com)

The concept for this album came when composer/multi-instrumentalist Michael Atherton was commissioned to produce a creative reconstruction of ancient Egyptian music for an exhibition at the Australian Museum. Atherton took it one step further, pursuing a long-term research project of which this entrancing CD is the result. By studying literary and visual records as well as surviving artifacts, he began to get an idea of which instruments had been used in ancient Egypt, then approached the compositions by drawing on his experience with medieval monophony, Eastern European and Turkish folk music, and a variety of intercultural projects. Scholarly though all this may sound, the music on Ankh teems with mystical passion, with hypnotic melodies that wrap you in their webs and won’t let go. Is it authentic? Who knows? But it’s definitely effective. (by by Bret Love)

Enjoy the magic of this very rare and beautiful sounds, recorded by a real master of world music ! 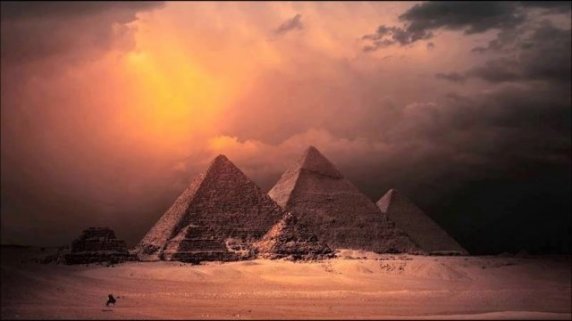