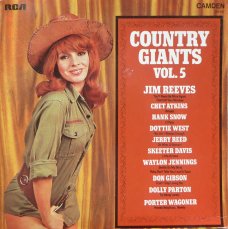 The artists performing on this album are amongst the all-time greats of country music, and between them they cover every style.

From the happy welcoming voice of Porter Wagoner to the deep emotive tones of Waylon Jennings, via the plaintive Skeeter Davis and the smooth Jim Reeves, not forgetting the brilliant guitar picking of Chet Atkins.

Country music at its very best represented by artists who are some of country music´s best ambassadors, as demonstrated by their visits to the United Kingdom.

The lovely Dottie West, a firm favourite at the Country Music Festival, Jerry Reid, who has a string of hitsto his credit as well as having written several hit songs for other artists; Don Gibson, who have besides having a fine voice, is also a well known songwriter, Dolly Parton, the beautiful lady of song, who in addition to her solo recordings, also duets with Porter Wagoner, and still finds time to compose.

Finally, there is the immortal Jim Reeves, who became a legend in his life-time, but whose popularity still lives on nearly a decade after his tragic death.

This then, is your opportunity to hear some of the finest country songs ever written, as presented by the musical “giants” of country music, and happily this opportunity “knocks” more than once. (taken from the original liner notes)

After the commercial success of Chet Atkins’ 12th 12″ LP, Chet Atkins’ Workshop, which peaked in the pop Top Ten in 1961, RCA Victor Records decided to turn the country guitarist into an easy listening bandleader à la Ray Conniff on his next release, The Most Popular Guitar. But that LP didn’t come close to the sales of its predecessor, and after a holiday collection (Christmas With Chet Atkins) at the end of the year, RCA opted to let Atkins do what he wanted again. Hence, his 15th long-player, Down Home. The contrast from his previous secular release couldn’t have been more dramatic. The scantily clad lass with the come-hither smile on the cover of The Most Popular Guitar was replaced by a front-porch-swing shot of Atkins himself, guitar in hand, a vintage car in the background, and a faithful dog at his feet.

And the strings that dominated The Most Popular Guitar were replaced by Atkins’ free-picking studio regulars, supporting him on a varied collection that never strayed far in the arrangements from an old-time country feeling, even when a saxophone intruded here and there. “Salty Dog Rag,” the leadoff track, was not the kind of material you’d have heard on The Most Popular Guitar, but it was no doubt closer to Atkins’ taste. The rest of the album, while mixing in a current movie theme (“Never on Sunday”) and a swing era classic (“Tuxedo Junction”), kept doubling back to country styles. And — what do you know? — Down Home outpolled The Most Popular Guitar by 88 places in the Billboard LP charts, returning him to the Top 40, which seemed to indicate that when you let Atkins do what he liked, his fans probably would like it too. (by William Ruhlmann) 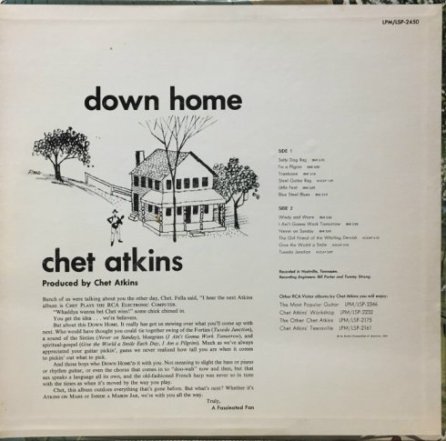 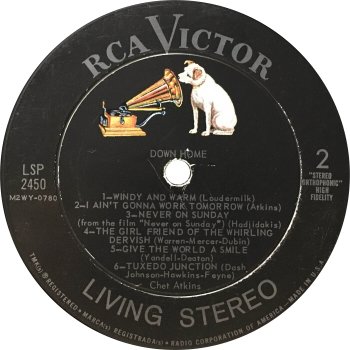 Chet Atkins hit the jackpot with his 12th 12″ LP release, Chet Atkins’ Workshop, which soared into the pop Top Ten, and RCA Victor Records hopefully released his 13th one with the title The Most Popular Guitar and adorned it with a cover picture of a comely girl in a negligee. The notion here seems to have been to present Atkins not so much as a guitar instrumentalist (though his guitar playing was, as usual, front and center) as the leader of a lush studio orchestra and chorus playing easy listening favorites in the manner of Percy Faith.

The varied selections ranged from show tunes like the leadoff track, George and Ira Gershwin’s “It Ain’t Necessarily So” from Porgy and Bess, to recent pop hits like the Platters’ “My Prayer” and swing era favorites such as “East of the Sun (West of the Moon).” But no matter the source, the treatment was in middle-of-the-road ballad form, with piano and harpsichord, muted horns, swirling strings, and wordless choruses augmenting Atkins’ dreamy electric-guitar stylings.

But perhaps Chet Atkins was not destined to become the next Ray Conniff. In any case, The Most Popular Guitar, despite spending ten weeks in the Billboard LP chart, did not match the sales of Chet Atkins’ Workshop, and the guitarist was free to go his own way, making whatever style of record he wanted in the future. (by William Ruhlmann) 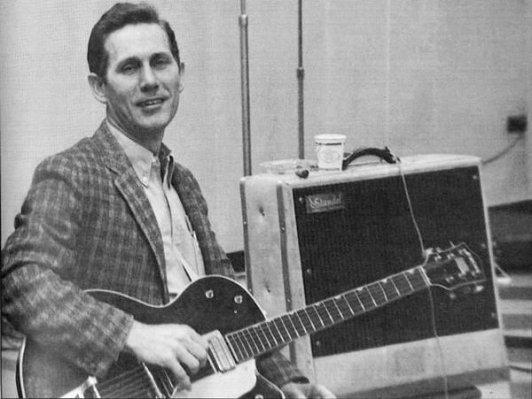 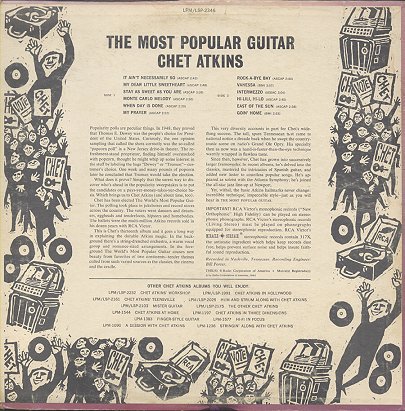 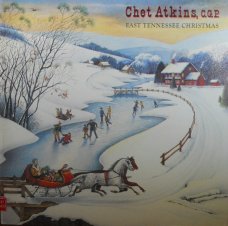 East Tennessee Christmas is a Christmas album by guitarist Chet Atkins, released in 1983. He had recorded a Christmas release previously for RCA 22 years earlier. He covers some of the same territory in this release but with a smoother production.

Writing for Allmusic, critic Stephen Thomas Erlewine wrote of the album “… an accomplished but unremarkable holiday effort. Much of the album sounds too slick, and the song selection is a little too predictable for its good, making the record itself sound like it is something Atkins had done before… the overall album makes little impression, and only dedicated Atkins fans will need to add this to their collection. (by wikipedia)

And here´s another opinion:

Christmas is the time in our family to pull out albums that bring back warm family memories. Each album is cozy and familiar as a favorite blanket and the smell of Christmas baking. Every once in awhile a new song will add itself to the list as a family classic (like Mannheim Steamroller Christmas in the Aire .) But, usually we stick to the family faves. Chet Atkin’s East Tennessee Christmas album is one of our standards. I have no idea when the vinyl was purchased (sometime in the 80’s) and by whom, but it is a lovely soothing Christmas album and has a place of honor with Johnny Mathis, Bing Crosby, Andy Williams and Montovani Christmas Carols. The instrumental songs are perfect background music for baking and opening presents and dinner parties. It is not ‘in your face’ or ‘sing along’ or ‘schmaltzy’ Christmas music. You can’t dance to it and it is not the cutesy-poo-gagsome stuff that a lot of holiday tunes have turned into. It is quiet, elegant, and simple steelstring guitar picking by Chet with the occasional background chorus and limited symphony accompaniment. It is calming and slightly sleepy without descending to elevator music.

My favorite tracks are the ones that show off the guitar stylings of Chet sans chorus, “Silent Night”, “Christmas Song” and “I’ll Be Home for Christmas”.
The boys chorus in ‘Away in the Manger’ and “Little Drummer Boy” is unnecessary, but not wince-able. What I like most is that it is a melodious and unique spin on old favorites. And, let’s face it, who needs lyrics? We already know all of these songs by heart. (by Eclectico) 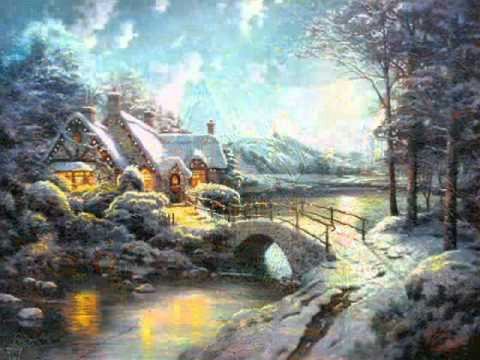 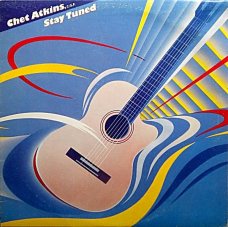 After decades of recording for RCA Victor, Atkins switched labels; this 1985 effort is a summit meeting of sorts with young guitar hotshots like Larry Carlton, George Benson, Mark Knopfler, Steve Lukather, and Earl Klugh, plus session A-teamers like Boots Randolph, Larrie Londin, David Hungate, Mark O’Connor and others. Atkins’ tone is, as usual, faultless, and his playing superb. If the “meetings” don’t always come off, it’s usually due to the overzealousness of the other guitar players (Lukather’s over-the-top style screams ’80s big hair, for instance), not Chet, whose playing always exercises the utmost in restraint in every situation. All in all, a good modern-day Chet Atkins album, but not the place to start a collection. (by Cub Koda) 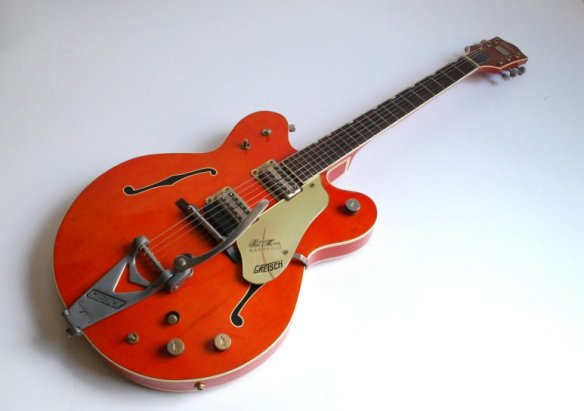 One of the most underrated holiday platters of all-time, Christmas with Chet Atkins shows the father of country-rock guitar performing 16 holiday standards in his own incomparable style. Although the uptempo stuff such as “Jingle Bell Rock” and “Winter Wonderland” are excellent readings, it’s in the slower-paced selections that Atkins really shines. His version of “Silver Bells” is, quite simply, one of the best versions of the standard ever, and possibly one of Atkins’ most arresting performances of all-time. Also excellent is the medley of “The Coventry Carol” and “God Rest Ye Merry Gentleman.” Overall, criminally underrated, this disc should be rated up there with such fodder as Charlie Brown Christmas. Gorgeous. (by Matthew Greenwald)

In other words:
I have loved Christmas with Chet Atkins since I was a kid- it has been a part of my christmas celebrations since the early 60s( the record was released in 1961). Imagine my delight in finding it on CD.The thing of it is, it’s not the same record. There are a number of differences between the CD and vinyl version; the songs “Little drummer boy”, “Silent Night” and “White Christmas” are alternate takes-not bad, just different. There is a noticeable “flutter” on “Jingle Bell Rock” and a few other tracks which makes me wonder whether the original master recording has been compromised in some way. This might also explain the use of alternate takes. Having said all that, Christmas with Chet Atkins is a woefully underrated record that continues to delight me over forty years after it was recorded. (Dan Penwarn) 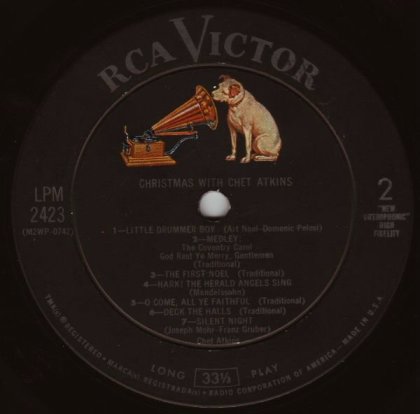