This is the second album by the Polish Jazz string quartet called Atom String Quartet, comprising of violinists Mateusz Smoczynski and Dawid Lubowicz, violist Michal Zaborski and cellist Krzysztof Lenczowski, which introduced a novel and revolutionary concept on the local scene combining the Classical Chamber music tradition and Jazz. Following the debut album recorded live, this is their first studio effort and it includes ten pieces, with just one originating outside the quartet (Chick Corea’s “Spain”); the rest are all originals: four by Lenczowski, two by Zaborski, one each by Lubowicz and Smoczynski and the remaining one co-composed by Smoczynski and Lenczowski. The album was recorded at the Polish Radio studios in Warsaw and mastered by Jan Smoczynski at his Studio Tokarnia, as usual with spectacular sonic results.

Following the spectacular debut, which took the local scene by surprise, the approach on this album is quite different. This album is much more concentrated on the compositions rather that the virtuosic performances and the element of novelty which dominated its predecessor. The album presents a “concept” of the relationship between music and the place it originates from, trying to show the different and the similar at the same time. Therefore many folkloristic themes from all over Europe appear here as part of the milieu, including of course the beautiful Polish melancholy, which is omnipresent in music originating from Poland. This World Music tendency takes this album a bit further away from Jazz, at least conceptually. 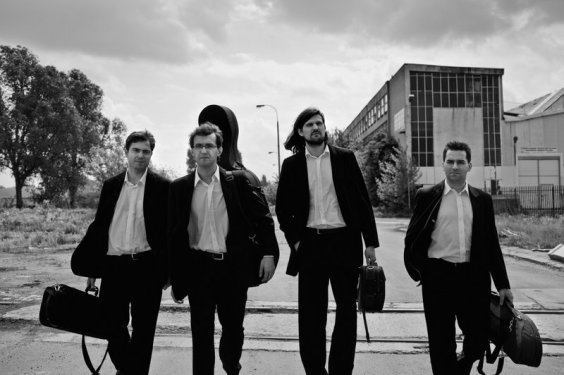 As expected, the individual performances are nothing short of sublime, and the entire album is a deeply moving listening experience. However, listeners familiar with their debut might miss the “spark” and “spontaneity”, which was so evident there and which were replaced here by careful planning, maturity and eloquent elegance. It is therefore almost impossible to compare these two albums, as they in fact present the different facets of the same group. Listeners longing for the lively approach of the debut will have to see the group live or perhaps wait for the next live recording.

For me the most important and meaningful aspect of this album is the progress in the quality and strength of the compositions, which start to become identifiable with the ensemble, which of course is an important step forward. Once the quartet develops its true individual musical identity (overcoming the fact that the music comes form four individual members), they will reach the apex of their development.

For now we are presented with another excellent album by one of the most intriguing music ensembles in contemporary music, which is definitely not only a great listening experience but also a victory of quality and intelligent music over our mundane “cultural” encounters in real life. Well done Gentlemen! (Adam Baruch)