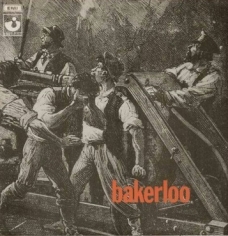 And here´s another band from the Midlands:

Bakerloo (previously The Bakerloo Blues Line) was an English heavy blues-rock trio, established by Staffordshire guitarist David “Clem” Clempson, Terry Poole and others in the late 1960s, at the high point of the influence of The Jimi Hendrix Experience and Cream. Although the group was prominent only for around a year (1968-9) and released only one album it played an important part in the history of the genre, especially in view of its members’ subsequent involvement with Colosseum, Humble Pie, May Blitz, Graham Bond, Vinegar Joe, Judas Priest and Uriah Heep.

The Bakerloo Blues Line was formed in February 1968 by David “Clem” Clempson and Terry Poole, who worked with several drummers, including John “Poli” Palmer and John Hinch, before settling with Keith Baker. Under the management of Jim Simpson, they began performing regularly at Henry’s in Birmingham and joined Simpson’s U.K. ‘Big Bear Ffolly’ tour with Earth (the future Black Sabbath), Locomotive and Tea And Symphony. The group appeared as the support act for Led Zeppelin’s debut at London’s famed Marquee Club on 18 October 1968. 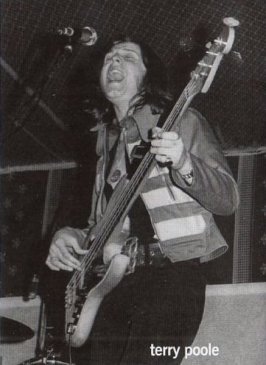 After simplifying the name to “Bakerloo” the group signed to Harvest Records in mid-1969. Their first release was a single, “Drivin’ Bachwards”/”Once Upon a Time” (HAR 5004) that July. The A-side is an arrangement of the J.S. Bach tune Bourrée in E minor. This record appeared just prior to the release of a similar song, Bourrée, by Jethro Tull, on their second album Stand Up in August 1969.

The single A-side also appeared on their self-titled album in December.

The album Bakerloo (Harvest SHVL 762) was further promoted by the inclusion of “This Worried Feeling,” a slow blues number, on the 1970 Harvest double sampler album Picnic – A Breath of Fresh Air and by sessions for the BBC. The album was produced by Gus Dudgeon. Notable tracks included Last Blues, a heavy rocker, and the album’s closer, Son of Moonshine, a driving metal blues. Other tracks contained “progressive” classical and jazz elements.

While reviews for the debut LP were favorable, the group itself was in disarray at the end of 1969. By the time the record was released, the Clempson-Poole-Baker lineup had decided to go their separate ways. Clempson initially sought to form a new blues-rock power trio, one that reportedly included drummer Cozy Powell, before electing to replace James Litherland as the guitarist in Colosseum. Poole and Baker also moved on, forming May Blitz with Jamie Black on vocals and guitar, although both departed before the band was signed to Vertigo Records.

Poole later played with several other bands, including Graham Bond and Vinegar Joe, while Baker bounced from Supertramp to Uriah Heep. Clempson would continue to achieve greater fame with Colosseum and, in 1971, as Peter Frampton’s replacement in Humble Pie. (by wikipedia)

One of the first acts signed to the fledgling Harvest label in 1969, Bakerloo were very much a product of their time, a hard-hitting progressive blues band whose predilections ranged from a straightforward assimilation of Willie Dixon to some positively dazzling flashes of instrumental prowess. Guitarist Dave Clempson’s “Big Bear Folly,” the opening cut on the band’s first and only album, is a dazzling Ten Years After-style showcase, while a jazzy variation on a theme of Bach, the aptly titled “Driving Bachwards,” proves that the band wasn’t averse to messing with the classics, either. The quartet’s virtuosity occasionally overwhelms the songs themselves, although there is no shortage of gripping atmosphere. Bassist Terry Poole unleashes an almost sepulchral vocal across the stygian “Last Blues,” a seven-minute marathon that swiftly develops into a full-fledged heavy rocker, punctuated by mood shifts that amount to separate movements — it’s a magnificent piece, rendered with both musical precision and some of producer Gus Dudgeon’s most inspired washes and effects. Impressive, too, is “Son of Moonshine,” a distorted metal effort that clocks in at double that length and combines Clempson’s intensive guitar soloing with a desperately driving blues rhythm. Period comparisons with Cream and early Led Zeppelin really weren’t that far off the mark. Bakerloo were not long for this earth — Clempson quit to join Colosseum shortly after the album’s release; Poole reappeared alongside Graham Bond; drummer Keith Baker departed for Uriah Heep; and Bakerloo itself disappeared off the shelves fairly quickly. (by Dave Thompson)

And here Dave Clempson in his own words about his time with Bakkerloo (taken from an interview with psychedelicbabymag.com, 2012) :

I want to go back in time to your childhood. Where did you grew up and what are perhaps some influences that made an impact on you?

I grew up in Tamworth, in the UK Midlands… my earliest influences were the bands that would be playing in the local working mens’ clubs, where my family would go on Sunday evenings for a drink… I was always very excited about seeing those bands, the “hip” ones would be playing the latest Shadows tunes, and I especially loved to see and hear the electric guitars they had – electric guitars weren’t so common around that area in those days! The best band was called The Wanderers, and the guitarist had a white Stratocaster – I would just sit there gazing at that!

Was Bakerloo your first band or were you in any other bands?

My first band was formed with friends at school, we were called “The Vipers”, and we played a lot of gigs at the working men’s clubs I just mentioned

Let’s talk about Bakerloo. How did you guys came together to form this powerful trio?

A local guy called David Mason asked me to join his band, which was called “The Pinch”, and which had a drummer called John Hinch – Mason wasn’t the world’s best bass player and he was soon replaced by a local boy called Terry Poole! John left the band soon after, and then Terry and I began a long quest to find the drummer of our dreams; we got through quite a few including Pete York and Poli Palmer, before we found Keith Baker, who was just what we’d been looking for – a drummer with a great rock feel and attitude but also the chops to play more adventurous stuff!

Harvest Records signed you up and in 1969 you released a single and your selftitled LP. I would like if you could share some of the strongest memories from recording and producing this LP?

The main memory is that it was my first real experience of recording, and there was a lot to learn! It was the first production by Gus Dudgeon, who had engineered some of my favourite albums, including the legendary Bluesbreakers with Eric Clapton.

What gear did you guys use and in what studio did you record?

It was recorded in Trident studios in London, I played my ’58 Les Paul goldtop through a Laney stack.

Why did you choose the name? Did it have a deeper meaning for you or was it just a coincidence?

Our manager came up with the name when he was travelling on the Bakerloo line on London’t underground – it didn’t have any special meaning, it just sounded cool!

Tell us about concerts. Where did Bakerloo play and with who?

After John Peel heard us play in Birmingham we appeared on his radio show, which was incredibly influential and the only chance to hear good music on the BBC! Soon after that we were booked by all the best blues clubs around the UK, such as the Roundhouse and the Marquee, where we supported Led Zeppelin on their first UK date!

What happened next. I know you joined Colosseum and after that you were in Humble Pie. How did that happened and what are some memories from playing in this two great bands?

Bakerloo supported Colosseum at a gig at Cambidge University, and when Bakerloo split up soon after Jon Hiseman called me and asked me to audition for Colosseum – I got the gig! I have a lot of wonderful memories of that time – Bakerloo had mostly just gigged in the UK, but now I started playing all over Europe which was very exciting … ”

And the rest ist history …

This album is still a killer  … listen to “Son Of Moonshine ” in the style of Cream (including “Cat´s Squirrel”) ! 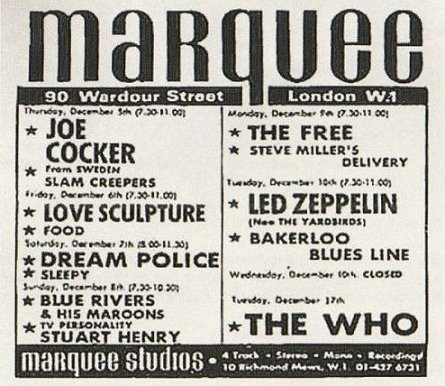