Black Star Riders is a hard rock band formed in December 2012. The band began when members of the most recent line-up of Thin Lizzy decided to record new material, but chose not to release it under the Thin Lizzy name. While Thin Lizzy continues on an occasional basis, Black Star Riders is a full-time band, described as “the next step in the evolution of the Thin Lizzy story”. The band’s first album, All Hell Breaks Loose, was released on May 21, 2013, and the follow-up album, The Killer Instinct was released on February 20, 2015. The band’s third album, Heavy Fire, was released on February 3, 2017, and reached number six on the UK Albums Chart.

Black Star Riders is fronted by Ricky Warwick, and originally featured lead guitarist Scott Gorham and bass guitarist Marco Mendoza. Mendoza was replaced by Robbie Crane in 2014. Drummer and founding member Jimmy DeGrasso left the band in March 2017,[6] and was replaced a few weeks later by Chad Szeliga. Another founding member, lead guitarist Damon Johnson, left the band at the end of 2018 to be replaced by Christian Martucci. Gorham and Szeliga left the band in September 2021, the latter being replaced by Zak St John. Gorham was not replaced, leaving the band as a quartet. Martucci left in June 2022, and a permanent replacement has not yet been announced.

On September 20, 2021, the band announced a new worldwide multi-record album deal with Earache Records and that they would be entering the studio in October 2021 to begin recording a new album. 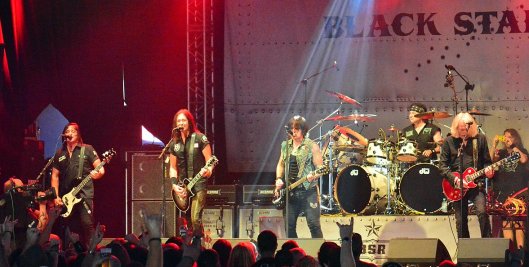 On June 6, 2022, the band announced their new album Wrong Side of Paradise, as well as a 10th anniversary UK tour. Scott Gorham and Jimmy DeGrasso are rejoining the band for the UK tour dates as part of the 10th anniversary commemorations.

In May 2010, Thin Lizzy lead guitarist Scott Gorham announced the latest incarnation of the group, which had toured sporadically with various line-ups since 1996, after the death of band leader Phil Lynott in 1986. This marked the return of the original drummer Brian Downey and longtime keyboard player Darren Wharton, joining Gorham, bass guitarist Marco Mendoza, and vocalist and occasional guitarist Ricky Warwick. The other lead guitarist role was initially filled by Vivian Campbell, then by Richard Fortus, before Damon Johnson joined the band in August 2011. As the band toured throughout 2011 and 2012, they composed new material for possible release as a Thin Lizzy studio album,[11] and demos were recorded in June 2012.

As the new material was being written, it became clear that Downey and Wharton would not be involved when the final recordings were made. Downey required a break from the heavy touring schedule, and Wharton wanted to return to his own band Dare, and to work on a film project.[14] Warwick confirmed, “Brian and Darren just don’t want to be on the road 150 days a year, and that’s completely understandable. But we do.”[14]

Gorham has stated that Thin Lizzy will still perform as a band in the future: “Thin Lizzy isn’t gonna die,” he said. With reference to the much-publicised Lizzy “farewell” tour in late 2012, Warwick confirmed, “All that ‘farewell’ meant is that we’re not going to do 150 Lizzy shows a year… those were just the last shows for a while.” Thin Lizzy completed a short tour of Australia in March 2013, with Downey and Wharton as part of the line-up.

Damon Johnson has revealed that Gorham was against any name for the new band that was related to Thin Lizzy, “because this band has to stand on its own”. Warwick named the band after a gang of outlaws in the 1993 western film Tombstone, and the new name was announced on December 20, 2012.

Damon Johnson and Scott Gorham at
The Warfield Theater in San Francisco, April 19, 2018: 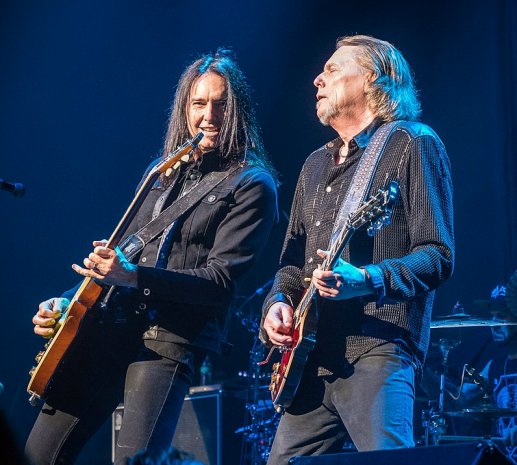 The band initially consisted of Gorham and Johnson on lead guitar, Mendoza on bass guitar, with Warwick acting as vocalist and occasional guitarist. The band brought in Jimmy DeGrasso on drums, but no keyboard player was recruited, with Gorham stating, “I don’t think we are actually going to have keyboards in Black Star Riders. You never know what’s going to happen down the road but that is the set-up right now with that.”[1]

All the founding members are American with the exception of Warwick, who is from Northern Ireland. Each had previously achieved success with other acts – Gorham with all incarnations of Thin Lizzy since 1974 and with 21 Guns; Warwick with The Almighty; Johnson with Brother Cane and Alice Cooper; Mendoza with Blue Murder, fronted by another ex-Thin Lizzy member, John Sykes; and DeGrasso with several acts including Megadeth, Suicidal Tendencies, White Lion and Alice Cooper. Gorham is the only member of Black Star Riders to have been a member of Thin Lizzy while Phil Lynott led the band and thus the only one to have appeared on a Thin Lizzy studio album. (wikipedia)

Black Star Riders formed in December 2012, when members of the most recent line-up of Thin Lizzy decided to record new material, but chose not to release it under the Thin Lizzy name. In May 2010, Gorham announced the latest incarnation of the group, which had toured sporadically with various line-ups since 1996, after Lynott’s death in 1986. As the band toured throughout 2011 and 2012, they composed new material for possible release as a Thin Lizzy studio album, and demos were recorded in June 2012.

In October 2012, it was announced that the new material would not be recorded under the Thin Lizzy name, and that a new band name would be used for the new songs. According to Gorham, this was “out of respect to Phil Lynott and the legacy he created”, though he confirmed that the new material would feature the classic Thin Lizzy sound.[3] He later confirmed that the decision was taken by himself and Thin Lizzy drummer Brian Downey, with the support of the other members of the band, and that the Thin Lizzy estate (controlled by Lynott’s widow Caroline) had also been uncomfortable about new Thin Lizzy studio recordings. Vocalist Ricky Warwick acknowledged that a portion of Thin Lizzy fans were also against the idea of Thin Lizzy studio recordings without Lynott.

With a line-up consisting of Gorham, Warwick, other Thin Lizzy touring members Damon Johnson (lead guitar) and Marco Mendoza (bass guitar), and experienced drummer Jimmy DeGrasso, Black Star Riders recorded their debut album during January 2013 with producer Kevin Shirley. Fifteen songs were recorded, composed mostly by Johnson with Warwick providing the lyrics, with input from Gorham, Mendoza and Thin Lizzy keyboard player Darren Wharton. Twelve tracks were ultimately used for the album, including one bonus track for a special edition CD. This special edition CD also includes a DVD outlining the process of making the album.[5] Recording was completed on 20 January, and the photography for the album and promotional material was also completed at that time, with American music photographer Robert John. Shirley mixed the album in February 2013.

Warwick confirmed that the recording process was very simple, with very few overdubs (mostly harmony guitars and backing vocals), minimal use of Pro Tools and no use of Auto-Tune. The lead vocals were recorded along with the band using a ‘live-in-the-studio’ method.

Regarding the title of the album, Warwick revealed: “I was watching a documentary about World War II bombers and saw the name painted on the side of one of the aircraft. The name just resonated with me and it seem to encapsulate the turmoil that we, as a society, are currently experiencing. The past few years have been such a wild ride and now with the release of the album, it sounded like a bad-ass album title that summed up what Black Star Riders is all about.” The cover art features a painting of a girl by Gil Elvgren. (wikipedia)

Thin Lizzy guitarist and songwriter Scott Gorham spent years debating whether to record new studio material under the band’s storied name. Ultimately, he decided not to out of respect for Phil Lynott’s memory. Gorham, vocalist Ricky Warwick (the Almighty), drummer Jimmy DeGrasso (Alice Cooper, Megadeth), bassist Marco Mendoza (Ted Nugent, Whitesnake), and partner/guitarist Damon Johnson (Alice Cooper), are the Black Star Riders — named for an outlaw gang in the film Tombstone. All but the drummer have played in the re-formed Thin Lizzy, too. Their debut, All Hell Breaks Loose, features a classic hard rock attack, solid songwriting, and great production by Kevin Shirley. The trademark twin guitar sound of TL is ever present, as is their aggressive attack, melodic sensibility, and deep groove consciousness — Gorham was one of the architects of that sound. Other elements also here are the riff heroics of early Whitesnake, the bluesy dynamics of early Bad Company, and the meaty boogie of early UFO. All of it is contained in solid, narrative songwriting. This is riff-based hard rock with deft hooks and tight musical turns played by raucous guitars, enormous, natural-sounding drums, and a rhythm section which makes it crunch, swagger, and strut.

It’s sung by a frontman who can convey the weight convincingly. The single “Kingdom of the Lost” melds Lizzy’s Black Rose-era Celtic flavor with the punk aesthetic of the Pogues (complete with pennywhistle intro). “Bound for Glory” could be a Lizzy anthem with twin guitars ablaze; it’s Warwick’s over-the-top tale of desperation to break out and break in. The chorus in “Kissin’ the Ground” is infectious, while “Hoodoo Voodoo” is full of nasty chugging guitars and contains a knotty bridge. “Bloodshot,” “Valley of the Stones,” and set closer “Blues Ain’t So Bad” (not a blues), are on the heavier end of the spectrum — that last one carries more than a hint of Robin Trower’s influence. “Hey Judas” weds the gorgeous lyric and twin-guitar sound to a bludgeoning riff and a soulful chorus. The Black Star Riders are deeply entrenched in mid-’70s to early-’80s hard rock, but how could they not be? Most of these cats made that music to begin with. The surprise is that here they fire on all cylinders consistently. While other acts work diligently to re-create the sounds on All Hell Breaks Loose, the Black Star Riders offer them naturally with creativity, heft, and inspiration (by Thom Jurek)