He was born in Rocky Mount, North Carolina and studied at Virginia State College,[4] but indicated that he learned more about music from musicians he worked with. In the seventies he played with Roy Haynes, Freddie Hubbard, Woody Shaw and Billy Harper, among others. (by wikipedia)

A fine pianist who was originally heavily influenced by McCoy Tyner, Joe Bonner is an excellent interpreter of modal-based music and advanced hard bop. He studied music at Virginia State College and early on played with Roy Haynes (1970-1971), Freddie Hubbard (1971-1972), Pharoah Sanders (1972-1974), and Billy Harper (late ’70s). Bonner, who recorded as a leader for Muse, Theresa, and most prominently Steeplechase, has been based in Colorado since the 1980s and remains a talented improviser. (by Scott Yanow)

An Under-appreciated Masterpiece:
I have always loved this album. I suspect that the reason that this wonderful set does not get the respect that it deserves is Joe Bonner’s overdubbing of his solo piano with a shadow Fender Rhodes. As distracting as that sounds on paper, it’s restrained use doesn’t overshadow the remarkable musicality that he displays on this almost therapeutic recording. It only makes me wonder why he thought it was necessary.

The accompanying cello and vocal on “Soft Breeze” sound completely appropriate to the nature of the music and this track has a calming effect that permeates the whole album. There is something graceful in Bonner’s style that is apparent even when he goes moderately up-tempo as he does in sections of “The Revolution.” His solo treatment of Thad Jones’ “A Child Is Born” is heartfelt and sublime. The nicely structured title track features the cello in melodic unison on the head only and the Fender Rhodes discretely in the background. “Primal Scream” undermines its title by being a romp in the park indicating that this is a scream of joy. “Ode To Trane” waltzes us off the floor without bringing the Fender Rhodes into the mix; a fitting climax to an album that ends too soon. The feeling that a tender and even spiritual mood is about to pass makes me want to listen to it again.

Joe Bonner’s style of harmony and rhythmic attack are immediately recognizable; upon a few hearings it shouldn’t be too difficult to pick him out in a blindfold test. Trouble is that he never settled into the top tier of piano masters who are widely recorded and who get airplay on the few jazz radio stations left. This recording is an easy introduction to the music of Joe Bonner for those who have never heard him. His use of the Fender Rhodes almost caused me to remove one star from this review but this album is so listenable that I relented.

New Beginnings is a rare treat and should not be missed. (George F. Bailey)

Oh, what a peaceful album ! 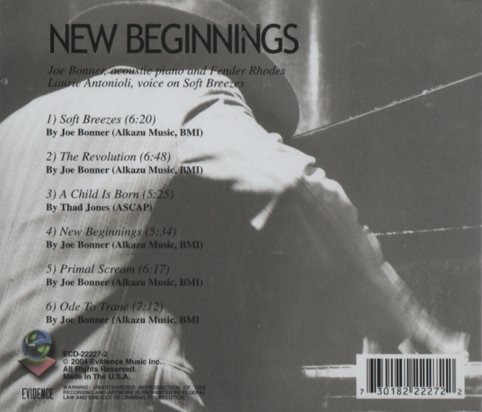