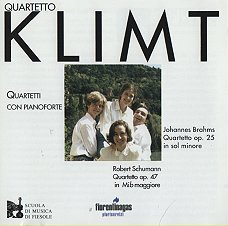 Formed in 1995 at the Scuola di Musica di Fiesole, the Klimt Quartet is today one of the most interesting young chamber music groups in Italy. Since its foundation it has performed in numerous concerts including prestigious Festivals in Italy and abroad. Between 1997-1999 the quartet attended for two years the master classes held by Trio di Milano in Fiesole; since 2000 the quartet has studied for various years with M.° Pier Narciso Masi. In April 1998 the quartet won first prize at the International Chamber Music Competition “Gaetano Zinetti” at Sanguinetto (VR). A few months after its foundation the quartet was invited by: “Encontre Internationale des Enseignements Artistiques” organized by the Institute de le Marionette a Charleville-Meziéres (France); the Orchestra Giovanile Italiana ad Aosta; the “Ater Festival” in Rimini; and by the “Elba Isola Musicale d’Europa” Festival, where it captured the attention of the great Yuri Bashmet. The following years have seen the group participating in prestigious musical seasons among which “Lingotto Musica” in Turin, the “Festival di Ravello”, “Musica Insieme” in Bologna and at the Bologna Festival, “Amici della Musica” in Florence, “Amici della Musica” in Perugia, the “Accademia Filarmonica Romana” in Rome, the “Serate Musicali di Milano”, the “Festival Mozart” in Rovereto. The quartet has also played a leading part in numerous live television and radio performances for the RAI (Radio Televisione Italiana).

In these years of intense activity, the quartet has benefited from the advice and support of artists such as Carlo Maria Giulini, Natalia Gutman and Maurizio Pollini; the latter invited Klimt to perform during the award ceremony of “Una vita nella Musica” in 1999 in Venice, and in 2001 gave them the scholarship “Arturo Benedetti Michelangeli”. In April 2001 the quartet inaugurated the first edition of “I Concerti del Quirinale” in Rome; in July 2001 the Klimt Quartet was invited to the prestigious “Oleg Kagan Musikfest di Kreuth” (Germany) and the “Festival of Santander” (Spain). In 2010 the prestigious magazine Amadeus published the two quartets for piano and strings by Robert Schumann performed by the Klimt Quartet and was later invited by the RAI to perform these pieces live for Euroradio for the bicentenary of Schumann’s birth. In 2011 it has been invited by Columbia University in New York, gaining a warm success by audience and press. In recognition of Klimt’s unfailing, passionate commitment to the promotion and diffusion of contemporary music, various composers, such as A.Solbiati, F.Antonioni, M.D’Amico and I. Vandor have dedicated compositions to the Quartet. Since 2008 the violinist of the group has been Duccio Ceccanti. (by livornomusicfestival.com)

And this is the debut album …. what a great debut album, recorded by this young Italian ensemble … if you like classic music (like me) … you should listen … what a unbelieveable sound ! 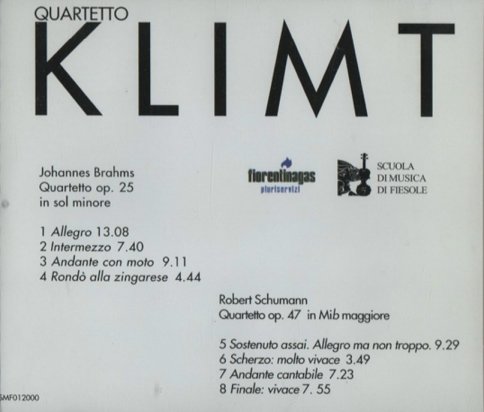 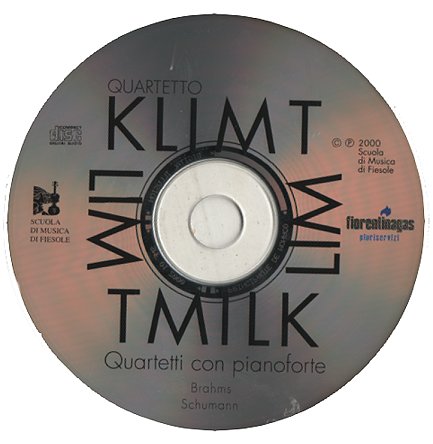