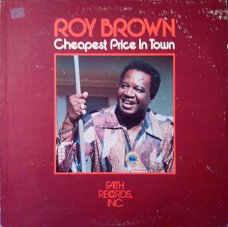 There is an on-going debate about the origins of Rock’n’Roll, but there is little doubt that it sounded very much like the R&B that Roy Brown was producing in New Orleans around 1950. His powerful, emotional Gospel style vocals, with melismatic swoops, shrieks and bellowing choruses, influenced the singing of generations of Rockers and Bluesmen that followed. Bobby ‘Blue’ Bland, Little Richard and James Brown all took a lesson from Roy, but he could also write a great song, and his best remembered composition saw him inducted into the Blues Hall of Fame.

Roy Brown was born in New Orleans in 1925, and grew up in Louisiana and Texas but moved to Los Angeles when his mother died in 1942. His vocal skills were honed in Church, but Roy was keen on becoming a boxer and fought as a welterweight, although

he was rejected for Military service on account of his flat feet! Roy won a singing contest, then moved to Galveston, Texas, where he fronted a band and started to play some Blues. When he wrote a song called ‘Good Rockin’ Tonight’, he tried to get his idol Wynonie Harris to record it, but he didn’t take it up. In June 1947, Roy went to Cosimo Matassa‘s J&M studio across from Congo Square in New Orleans, and he emerged with his own version of ‘Good Rockin’ Tonight’, which put his Gospel vocals over a driving rhythm and “talked a little dirty”, making it a prime candidate to be a rock’n’roll anthem. It got some airplay on ‘white’ radio stations, and the local ‘black’ stations, especially ‘Poppa Stoppa’s Show’, played it almost non-stop, and Roy’s version reached No.13 in the R&B charts. Wynonie Harris finally recognised a ‘good thing’ and his version went to No.1 in the following year, and Elvis, Jerry Lee Lewis, Ricky Nelson and Bruce Springsteen have all had success with Roy’s composition. Further big hits in the same vein, like ‘Hard Luck Blues’, ‘Miss Fanny Brown’ and ‘Cadillac Baby’, made Roy the best selling R&B artist from 1949-51. 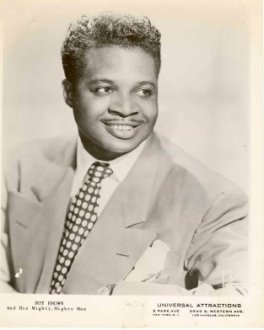 music community, in 1952 Roy won a court battle for access to his royalty payments from Wynonie’s records on the King label. This was a double-edged victory that may have caused him to be black-listed by record companies, and it certainly caused him trouble with the IRS, because he did some jail-time for tax evasion, despite Elvis generously writing him a cheque. Roy’s career never recovered, although he made the R&B charts in 1957 with ‘Let the Four Winds Blow’. He sold encyclopedias door-to-door, sold the rights to ‘Good Rockin’ and played only the occasional gig. In 1970, he played the Monterey Festival with the Johnny Otis Show and had a reasonable hit with ‘Love for Sale’, and a low-key revival started. He toured in Europe in 1978 and his final appearance in 1981 was at the New Orleans Jazz Festival, one month before he passed away from heart trouble at home in California. (allaboutbluesmusic.com)

And this is the last album by Roy BRown and it´s another fine album by of the most importnt musicians of this very special New Orleans mixture of Blues, Jazz & Gospel .. 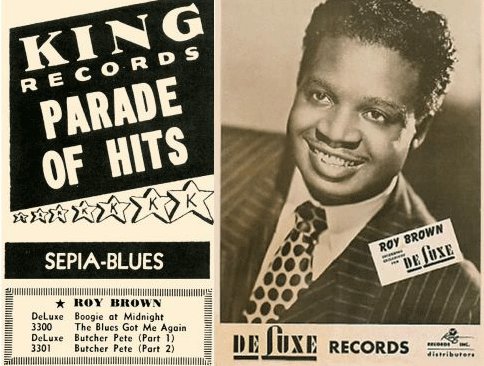 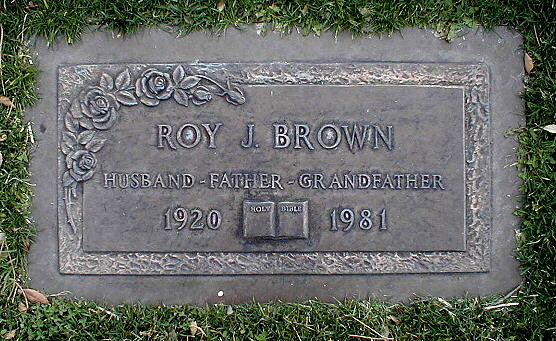 Roy James Brown (September 10, 1925 – May 25, 1981) was an American R&B singer, songwriter and musician, who had a significant influence on the early development of rock and roll. His original song and hit recording “Good Rocking Tonight” was covered by Wynonie Harris, Elvis Presley, Bruce Springsteen, Ricky Nelson, Jerry Lee Lewis, Pat Boone, James Brown, the Doors, and the rock group Montrose. Brown was the first singer in recording history to sing R&B songs with a gospel-steeped delivery, which was then considered taboo by many churches. In addition, his melismatical pleading, vocal style influenced such notable artists as B.B. King, Bobby Bland, Elvis Presley, Jackie Wilson, James Brown and Little Richard.

Brown was born in New Orleans, Louisiana on September 10, 1925. As with most R&B singers, he started singing gospel music in the church. His mother was an accomplished singer and church organist. After a move to Los Angeles, California some 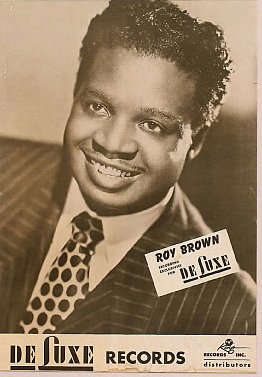 time in the 1940s, and a brief period spent as a professional boxer in the welterweight category, he won a singing contest in 1945 at the Million Dollar Theater covering “There’s No You”, originally recorded by Bing Crosby. In 1946, Brown moved to Galveston, Texas, where he sang in Joe Coleman’s group performing mostly songs from the Hit Parade, in a club called the Club Granada. His numbers included a song he wrote entitled “Good Rocking Tonight”. After being rejected by the Armed Forces because of flat feet, he secured his first major job in a Shreveport, Louisiana club singing mostly pop ballads such as “Stardust” and “Blue Hawaii”. The owner of Bill Riley’s Palace Park hired him, as Brown told a Blues Unlimited interviewer, because of his appeal as “a Negro singer who sounds white.” It was at the Palace Park that Brown started developing a blues repertoire, learning contemporary R&B tunes such as “Jelly Jelly” (recorded by Billy Eckstine). He returned to New Orleans in 1947, where he performed at The Dew Drop Inn.

Brown was a big fan of blues singer Wynonie Harris. When Harris appeared in town, Brown tried but failed to interest Harris in listening to “Good Rocking Tonight.” Dejected, Brown approached another blues singer, Cecil Gant who was appearing at another club in town. Brown introduced his song, and Gant had Brown sing it over the telephone to the president of De Luxe Records, Jules Braun, reportedly at 4:00 in the morning. Brown was signed to a recording contract immediately. Brown recorded the song in a jump blues style with a swing beat. It was released in 1948 and reached #13 on the US Billboard R&B chart. Ironically, Wynonie Harris covered it and hit the top of Billboard’s R&B chart later in 1948. Presley also covered the song for Sun Records in 1954; later re-released on RCA Victor when his recording contract was sold to that record label in 1956.

Brown continued to make his mark on the R&B charts, scoring 14 hits from mid-1948 to late 1951 with De Luxe, including “Hard Luck Blues” (his biggest seller in 1950), “Love Don’t Love Nobody”, “Rockin’ at Midnight,” “Boogie at Midnight,” “Miss Fanny Brown,” and “Cadillac Baby”, making him, along with Harris, one of the top R&B performers for those three years.

After his popularity peaked, Brown began to experience a lull in his career. Doo-wop and R&B groups were quickly gaining popularity as the standard sound of R&B in the early to mid-1950s. The decline of his fortunes coincided with his successfully winning a lawsuit against King Records for unpaid royalties in 1952, one of the few African American musicians to do so in the 1950s. This has led some, such as author Nick Tosches (in his book Unsung Heroes Of Rock ‘N’ Roll, which contained a chapter on Brown) to believe that Brown may have been blacklisted. Brown’s other misfortunes included trouble with the IRS. When confronted by the government for unpaid taxes he owed, he approached Elvis Presley for help. Presley wrote him a check on a brown paper bag, but it wasn’t enough to keep him out of jail. Brown did a little prison time for tax evasion.

Brown had a brief comeback through Imperial Records in 1957. Working with Dave Bartholomew, Brown returned to the charts with the original version of “Let the Four Winds Blow”, co-written with Fats Domino, who would later have a hit with it.

He returned to King Records where his popularity ground down to a low by 1959, but he sporadically managed to find work and do some recording through the 1960s, making appearances where ever he was wanted. To supplement his income, Brown sold the rights to “Good Rocking Tonight”. “I was selling door to door,” he once reminisced. He also worked as an encyclopedia salesman.

In 1970, Brown closed The Johnny Otis Show at the Monterey Jazz Festival. As a result of the crowd’s positive reaction, he recorded “Love For Sale”, which became a hit for Mercury Records.

In the late 1970s, a compilation album of his old work brought about a minor revival of interest. In 1978 he had a successful tour in Scandinavia following the releases of Laughing But Crying and Good Rocking Tonight. Shortly before his death he performed at the Whisky A Go-Go in West Hollywood, California and headlined the New Orleans Jazz and Heritage Festival in 1981.

Brown died of a heart attack, at Pacoima Lutheran Memorial Hospital, near his home in the San Fernando Valley on May 25, 1981. He was 55 years old. The Reverend Johnny Otis conducted the funeral. He was posthumously inducted into the Blues Hall of Fame the same year. (by wikipedia)

Roy Brown’s highly influential crying vocal style is convincingly showcased on this two-record set of his late-’40s and ’50s material. (by George Bedard)

And … this is an unbelieveable good record !!! 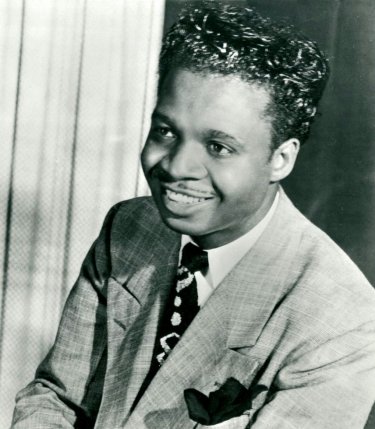 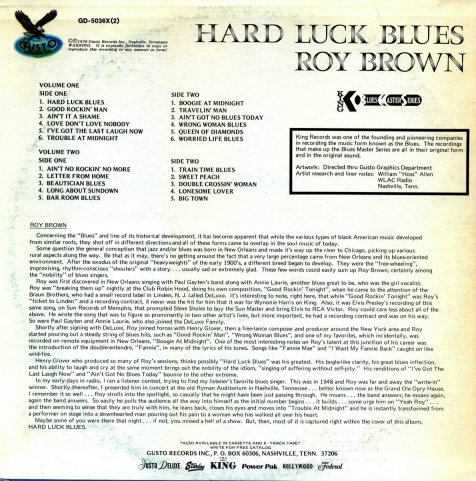