If Dancing on a Cold Wind is not as strong as Carmen’s previous album, it is mostly because the 24-minute suite “Rememberances (Recuerdos de Espana)” is not as tightly linked musically than the second half of Fandangos in Space. The fact that heartbreak and failed relationships provide the sole topic on this album also gives it redundant flavor. Still, this effort showcases the same elements that made the band’s first LP an artistic success: sharp musicianship and the spellbinding blend of progressive rock and flamenco, although this time around the first influence is far more important than the second. It is not obvious in the opener “Viva Mi Sevilla,” though; this frenetic dance is the album’s energy peak. A set of variations on the theme of Fandangos in Space’s “Bulerias,” pushing the Spanish element to new heights, can be considered as Carmen’s best song ever, impressive in every possible way, and John Glascock’s distorted bass rips the tiles off the floor. All other tracks follow a lightly melancholic mood. The pop song “I’ve Been Crying” hints at the direction Carmen will take on its last album The Gypsies. The nine-part suite “Rememberances” follows the plot of an impossible love: a gypsy woman, ex-prostitute who turned her life around, finds and loses the love of her life. All band members are cast, with Roberto Amaral acting as narrator and first singer. The piece features some good themes (“Table Two for One [Sambra],” “Time [She’s No Lady]”) but it suffers from structural problems. This album is still worthy of any prog rock fan’s attention. (by François Couture)

Carmen reminds me a lot of Trapeze, the little metal trio where Glenn Hughes (later of Deep Purple’s fame) served as vocalist/bass player. Some of their songs are drenched in heavy metal. Viva Mi Sevilla starts as a heavy “fandango” with some amazing tapping by “bailaora” Angela Allen and hand clapping, and follows with some pure heavy metal or hard rock, characterized by heavy guitar interplay, thumping rhythm and accentuated bass lines; it’s intro is probably the most representative of flamenco music. “I’ve Been Crying” has Angela as lead singer, and she has a great voice, although a bit forced at times; it also develops an interesting bridge (a sort of waltz, later accompanied with castanets and increasing tempo). “Drifting Along” has also a heavy rhythm and great vocal harmonies. “Purple Flowers” starts as a slow blues and amusing chorus, then we’re in for a section in the middle in 7/8 and vocal harmonies a la Queen in the climax.

The sidelong suite called “Rememberances” is a collection of ditties revolving on a sort of frustrated love story, and is for me the best side of the album; “She’s Changed” has amazing display of castanets, pan flutes and string arrangements, while “Dancing on a Cold Wind” features odd chord progressions when put together with the vocal harmonies. “Conclusion” reprises the main She’s Changed theme with variations of F#, instead of the G# minor of the main theme. The same theme is also reprised in “Gypsy Girl”, but in an

instrumental mode; thus it gives a feeling of continuation through the entire side.

Perhaps the most notable member of the band is David Allen, while Glascock sets the rhythm greatly along with Fenton, Amaral and Karan. David Katz is an integral factor in the music with violin casting the “symphonic” sparks of Carmen’s music, along with Angela’s atmospheric mellotron (although I think she would had drawn attention on stage with the dancing, as well as her gorgeous presence). But the guitar, as always, is the main instrument in spanish folk music (second is the vocal). The lyrics might be the only real fault I would find in their music, as it doesn’t really work in the musical context that they projected; the music, as such, works better accompanied with spanish lyrics. but you don’t really need to appreciate the lyrics if only for listening to the amazing vocal deliveries. (by Chus)

The cover is a mock-up of the logo for Gitanes brand cigarette. 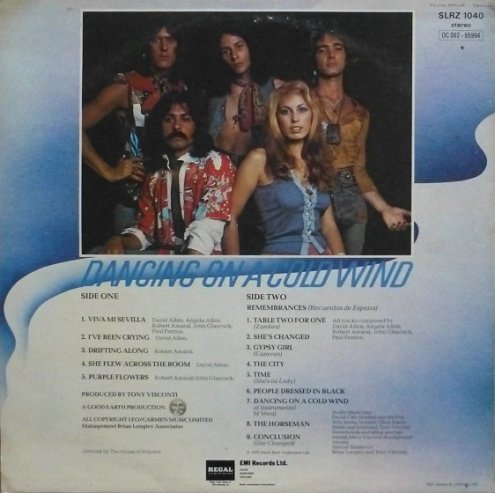 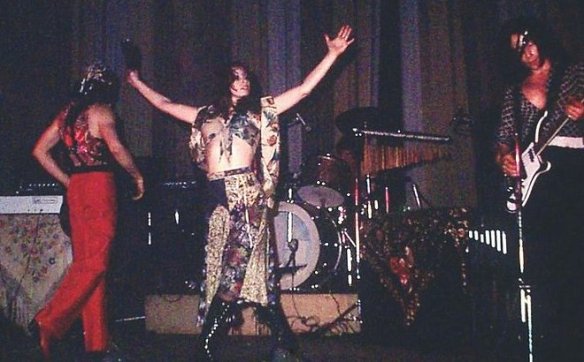