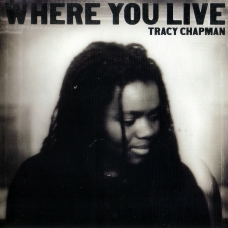 Where You Live is Tracy Chapman’s seventh studio album and was released September 13, 2005. The album was co-produced by Tchad Blake. It produced two singles: “Change”, and “America”.

Where You Live is a reminder that somewhere during her career, Tracy Chapman softly transformed from just an early publicized face of contemporary folk into a quiet stalwart of social commentary and atmosphere. Though she is certainly best known for her hits “Fast Car” and “Give Me One Reason,” those two songs stand within her history as suspension bridge supports: visible from afar as beacons of a structure with purpose, whose job is to sustain the action from point A to point B in her slow evolution. And with major labels’ consistent tendency to lean further and further away from hosting artists for more than an album or two, it is commendable that Elektra seems dedicated in serving Chapman’s subtlety and dependable longevity, affording her the luxury of having producers and players aboard who nurture her sound through said evolution. Where You Live is yet another elegant and easy album from Chapman, just the kind her fan base has come to expect, and with the help of co-producer Tchad Blake, it embraces some details of Chapman’s penchant for darkness, where parts of her earlier records glossed over these folds. Judging by many of the artists with whom he has worked,

Blake’s inclination seems to be to find minutiae such as this and latch on, his approach being generally heavy-handed, but here he has left plenty of room for the songs to really breathe around their most intriguing attribute: Chapman’s warm voice. Perhaps it was Chapman’s role as co-producer that served as a ballast, or perhaps it is an example of Blake’s growth, but it is worth noting Blake’s late-’90s trademark — ultra-compressed, watery, and claustrophobic drum sounds — has been given a rest in exchange for simple, dry, and tight drums played minimally by Quinn. This restrained foundation is integral to the dynamics of Where You Live, allowing any flourish to meet the ear with immediacy and purpose. Short of a few examples, Where You Live slides along at a gentle, mid-tempo gait. The nature of Chapman’s calm delivery, as with much of her catalog, is deceiving, considering some of the heavy subject matter, but it is perhaps one of her greatest assets that she is able to allow her messages to sink in like mellow fatigue on a late-summer Sunday evening. In anyone else’s hands, these smooth edges would likely suffer under the force of preaching, but her demeanor allows the words and melodies to work for themselves. Perhaps due to the album’s fluidity, no song from Where You Live immediately presents itself as the single; instead the album operates entirely as a measured course and will enlighten those who will choose to fall into its simple allure, rather than acting as a hook for new listeners. (by Gregory McIntosh)

And this wonderful album comes with a beautiful booklet ! 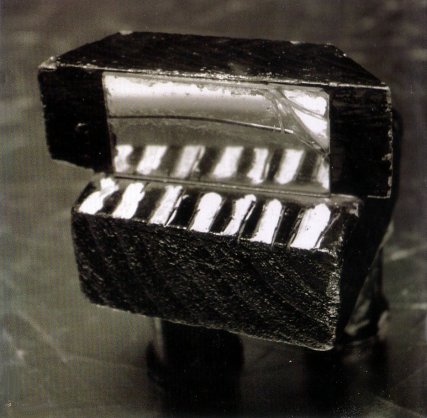 All songs written by Tracy Chapman. 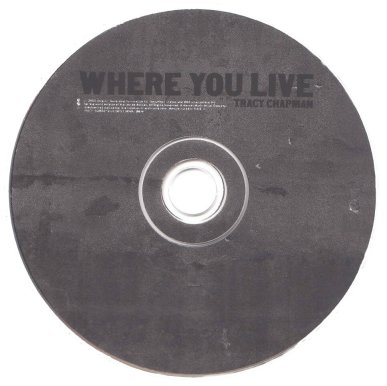 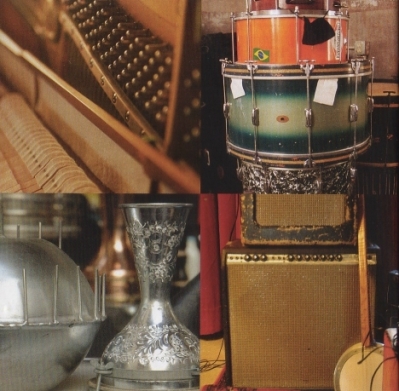 Tracy Chapman was discovered in 1987 by fellow Tufts University student Brian Koppelman. “I was helping organize a boycott protest against apartheid at school, and someone told me there was this great protest singer I should get to play at the rally,” says Koppelman, who now works in A&R at Elektra. He went to see Chapman perform at a coffeehouse called Cappuccino. “Tracy walked onstage, and it was like an epiphany,” he says. “Her presence, her voice, her songs, her sincerity — it all came across.”

Koppelman approached Chapman after the performance and said, “I don’t normally do this, but I think my father could help you a lot.” (Charles Koppelman, his father, was then co-owner of SBK Publishing, one of the largest independent song publishers in the world.) Chapman listened politely but didn’t say much and went on her way.

Undaunted, Koppelman continued attending her shows, sitting in the front row. Although Chapman finally agreed to talk, she declined to cut any demos for him. Then Koppelman found out that Chapman had already recorded some demos at the Tufts radio station, WMFO, for copyright purposes. (In exchange, the station got to broadcast her songs.) Koppelman went to the station, and while a friend distracted the DJ, he lifted one of the tapes. It had one song, “Talkin’ Bout a Revolution,” on it. He made a copy and took it to his father. “He immediately got the picture and flew up to see her,” Koppelman says.

Chapman’s demo tape with SBK led to a signing with Elektra. “I have to say that I never thought I would get a contract with a major record label,” she told an interviewer shortly after the album’s release. “All the time since I was a kid listening to records and the radio, I didn’t think there was any indication that record people would find the kind of music that I did marketable. Especially when I was singing songs like ‘Talkin’ Bout a Revolution’ during the Seventies. . . . I didn’t see a place for me there.” (takenn from the Tracy Chapman website)

And here are these demo recordings … Tracy Chapman pure … another chance to discover one of the finest ladiey in music !

It is labeled 1987 but a source who knows a bit about Tracy Chapman history believes
these might have been recorded in 1986 in Medford MA at WMFO studios
at Tufts University where Tracy was going to school.

The tape was probably circulated locally in conjunction with a few shows
she was doing in Boston at that time. It was before her debut was recorded.

Tracy Chapman as a street musician in 1985 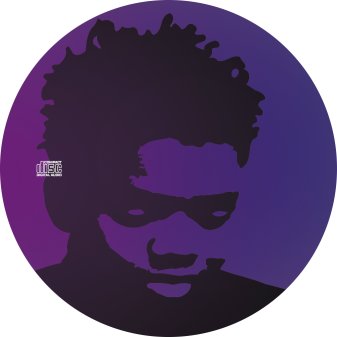 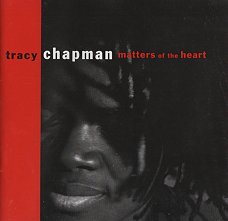 Matters of the Heart is the third album by American singer-songwriter Tracy Chapman, released in 1992. It was her first not to be produced or co-produced by David Kershenbaum. (by wikipedia)

Any serious-minded artist who calls an album Matters of the Heart would normally be asking for trouble — titles like that are generally reserved for Valerie Bertinelli TV movies. For Tracy Chapman, though, a little bit of maudlin goes a long way. Chapman’s astonishing 1988 debut, Tracy Chapman, is still a pinnacle of singer-songwriter craft — assured and determined, its songs rooted in the folk narrative tradition yet adding a modern edge. (”Behind the Wall” not only predated the topic of Public Enemy’s antiauthoritarian ”911 Is a Joke,” but did it with a field-holler melody.) Yet on its follow-up, Crossroads (1989), Chapman mostly whined about being reduced to ”a white man’s drone” in the ”material world.” Even Sean Penn handled success better than that.

Chapman’s internal debate about whether or not she has ”sold out” continues a little on Matters of the Heart. (”I Used to Be a Sailor” — about a seaman stranded on an island without any means of escape — is clearly a price-of- success metaphor.) Yet the album breathes easier, both in its lyrics and its music. Chapman seems more reconciled to balancing her public life with her private one, and she sounds a lot more human as a result. ”Here I sit, I’m feeling sorry for myself,” she sings at one point, adding with the slightest hint of self-deprecating humor, ”It’s quite a sight.”

The songs are stronger than those on Crossroads, whether Chapman is offering consolation to a friend or lover in ”Open Arms” or pondering guns in the ghetto in ”Bang Bang Bang.” With coproducer Jimmy Iovine, she also continues to master the art of folk-pop that’s fully produced, yet still sparse and airy. There are plenty of instruments on each track, but you’d never know it. Everything is centered on her voice (which sounds much warmer than it did on Crossroads), a strummed guitar or two, and light percussion. The music glides along, with a few inventive extra touches like the swooping electric guitar of Living Colour’s Vernon Reid gently insinuating itself into ”Bang Bang Bang.”

The album’s centerpiece is its remarkable seven-minute title song, which finds Chapman bluntly picking over an obsessive love affair that has left her both confused and enlightened. The taut musical accents — congas nipping at each verse — add masterfully to the tension of Chapman spitting out lyrics like ”I’ve made myself sick/I can’t think of anything else/I can’t sleep at night.” The performance makes the onslaught of bland male and female singer-songwriters who have followed in her wake sound truly wimpy.

With her humorless delivery, Chapman can still make Leonard Cohen sound like the life of the party. And she remains the epitome of political correctness: Singing about women’s rights, corporate fat cats, and the lack of ”clean air to breathe/Pure water to drink of,” she could forge a second career as a Democratic presidential contender. Those sentiments may be liberal clichés, but that doesn’t make them any less noble. In the end, Chapman still wants to be someone, be someone — only a slightly better someone in an improved world. On Matters of the Heart, she’s back on track toward that goal. (by David Browne)

This one of the finest albums I´ve ever heard … A real tresure … a real hightlight in the history of recorded music ! 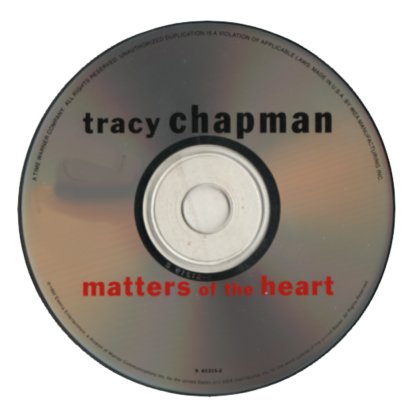 Tracy Chapman’s self-titled debut album of 1988 was an incredibly tough act to follow, but the folk-rocker delivered an inspired sophomore effort with Crossroads. While it falls short of the excellence of her stunning debut, Crossroads is a heartfelt, honest offering that’s well worth obtaining. Dedicated to South African freedom fighter Nelson Mandela, the anthemic “Freedom Now” is one of Chapman’s best protest songs. Equally compelling is “Subcity,” a lament for the poor, disenfranchised underclass that stands on the outside of the American Dream looking in. Much of the time, however, Chapman isn’t going for immediacy — introspective and subtle songs like “Bridges,” “Be Careful of My Heart,” and “All That You Have Is Your Soul” require at least several listens in order to be fully appreciated. (by Alex Henderson)

I like her best here when she’s most objectionable–keying her politics to the anachronistic locution “government relief,” making her lover commit first, identifying evil with white people. She’s still too solemn, but at least she’s not too tasteful, and how else do you describe a musician who gives the impression of singing solo with her acoustic guitar while deploying five or six musicians a track? As a musician who gets over on her voice, that’s how. (by Robert Christgau)