David Clayton-Thomas (born David Henry Thomsett, 13 September, 1941) is a Canadian Juno Award-winning musician and singer. As the lead vocalist for the band, Blood, Sweat & Tears he rose to fame, and maintained a busy solo career over the years as well.

Clayton-Thomas was born in Kingston upon Thames, Surrey, UK, the son of a decorated Canadian soldier of World War II who met his piano-playing mother when she came to entertain the troops at a London hospital. They were married, and when the war ended, the family moved to Willowdale, Ontario, a suburb of Toronto, when Clayton-Thomas was not yet school-aged.

Growing up, he was taught music by his mother but had difficulties in what was a dysfunctional family. He left home in his early teens. He idolized the music of John Lee Hooker and began playing guitar and singing, and by the time he was 21 had his own band, The Shays. David Clayton-Thomas & The Shays recorded for Roman Records of Toronto. Clayton-Thomas released two albums on the record label, “A Go Go” (with The Shays) and “Like It Is” (with The Bossmen).

In February 1966, he joined a new band, The Bossmen, fronted by the child prodigy, pianist Tony Collacott, who had played with Sarah Vaughan at New York’s Carnegie Hall at the age of 14. The group recorded a lone single, the jazz-rock song “Brainwashed,” which was a Canadian hit record in June 1966 and gave an indication of his future work.

The band broke up soon afterward and he traveled to New York. In October 1967, he joined forces with former members of the Toronto R&B outfit, Jon and Lee & The Checkmates and renamed them his new backing band, The Phoenix. The group started a residency at a New York nightclub, Steve Paul’s The Scene, but he was soon deported for working illegally in the States.

In February 1968, Clayton-Thomas formed a new band in Toronto, the David Clayton-Thomas Combine with former Bossmen guitarist Jack Mowbrey, ex-Phoenix bass player Peter Hodgson, and drummer Pat Little from Luke & The Apostles. The group recorded the original version of his hit “Spinning Wheel” but the band broke up a few months later when Clayton-Thomas was offered a more attractive offer from Bobby Colomby, the drummer with Blood, Sweat & Tears. (by wikipedia)

A few years before he joined Blood, Sweat and Tears, David Clayton-Thomas was the lead vocalist with the Shays in Canada. In 1964, David-Clayton Thomas and the Shays recorded the single “Boom Boom.” In 1965, the album “David Clayton-Thomas And The Shays: A Go-Go” was released in Canada. The songs on this “David Clayton-Thomas” album date from around that time. Young David’s vocals were somewhat raw, yet very strong. Even at that age, his gritty voice was best suited for covering blues songs. That makes the song selections on this album uniformly great. Below is the track listing for the album.

And yes, this a real great album from the early days of David Clayton-Thomas with great versions of classic Blues & R&B tunes ! 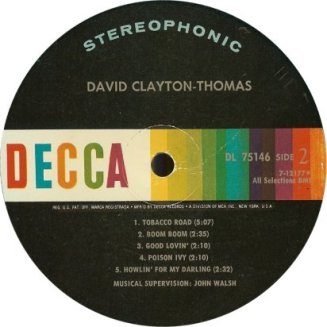