Taken from a press notice:

“I get up and plan to do some writing and actually end up spending most of it being distracted by other things,” that’s how Clem Clempson explained why he hadn’t come up with a solo album, when asked by DME ten years ago. Indeed, having worked with BAKERLOO, COLOSSEUM, ROUGH DIAMOND and some other project, one of the finest British guitarist didn’t have time to make a proper record of his own. Until now, that is.

Last year, Clem hooked up for some songwriting with Pete Brown, a lyricist par excellence, most famous for his stints with CREAM and Jack Bruce, and then threw in some classics. One of these is Ray Charles’ “I Don’t Need No Doctor,” a PIE live staple which gets delivered by COLOSSEUM voice Chris Farlowe and the most fabulous Maggie Bell. The other, “Route 66,” sees Maggie joined by her former STONE THE CROWS colleague Ronnie Leahy on keyboards. A lot to enjoy then, when the record, titled “In the Public Interest,” comes out.

Cream rises [and there’s a pun to rise within the metaphor later on] and this first ever solo outing from founding member of Bakerloo [and later Colosseum and Humble Pie], David ‘Clem’ Clempson, is just that in its classic presentation of rock and blues perfection. For those who recall, Bakerloo’s blues gem This Worried Feeling – gaining prominence on the Harvest label’s Picnic sampler of 1970 – features one of the greatest fuzzed-up and wah-wahed guitar solos ever. Ever. Sustained sumptuousness.

The tracks on this album are more mainstream modern rock, and exude class. There is gorgeous guitar on the instrumental fourth track Can’t We Try Again – a tranquil antithesis to the feedback-heavy brilliance of Clem’s Bakerloo classic: age does not wither but it becalms – and of course his guitar soloing throughout all tracks is exemplary. Second instrumental, eighth track Leopold’s Great Escape, jazzes things up a bit. The third, 7th Blues, [that’s a load of numbers….] is again calmly sweet.

There are great guest vocalists: Maggie Bell on third Route 69, and Chris Farlowe on blues chug Who, whilst they both combine to contribute to Ray Charles’ I Don’t Need No Doctor. 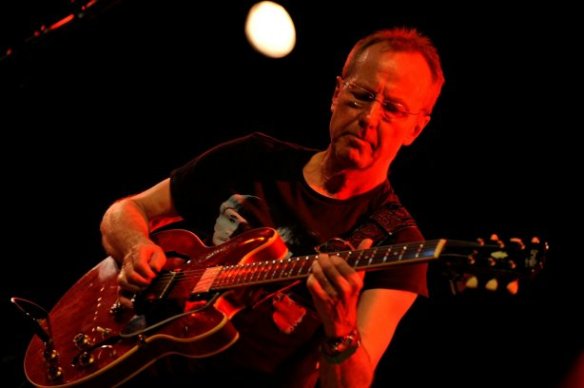