William “Billy” Cox (born October 16, 1939) is an American bassist, best known for performing with Jimi Hendrix. Cox is the only surviving musician to have regularly played with Hendrix: first with the experimental group that backed Hendrix at Woodstock (informally referred to as “Gypsy Sun and Rainbows”), followed by the trio with drummer Buddy Miles that recorded the live Band of Gypsys album, and, lastly, The Cry of Love Tour trio with Mitch Mitchell back on drums. Cox continues to perform dates with the Band of Gypsys Experience and the Experience Hendrix Tour.

In addition to Hendrix, he has either been a member of the house or touring band or recorded sessions for Sam Cooke, Slim Harpo, Joe Simon, Charlie Daniels, John McLaughlin, Rufus Thomas, Carla Thomas, Lou Rawls, Etta James, Jackie Wilson and Little Richard. (by wikipedia)

In 2009 Billy Cox was inducted into The Musicians Hall Of Fame; in 2010 he was honored with Experience Music Project’s Founders Award and earlier this year he was inducted into the West Virginia Music Hall Of Fame. With the honors and accolades pouring in, thick and fast, it would be understandable if he were to rest on his laurels. But that’s just not the Billy Cox way. He’s been a music man in motion for more than 50 years and shows no signs of slowing down. His latest album release, Old School Blue Blues, is a testament to his inexhaustible energy fervor and drive. To borrow from the album’s first — and last — track, he keeps “Rockin’ And Rollin’ On.” The album is something of a plea for a return to authenticity in music, both in terms of message and in the process by which it was created. (unknown source)

Billy Cox has soul to spare in his latest release”Old School Blue Blues”.From start to finish the music is many shades of Old School Blues, RnB, Rock and a solid anchor that comes with the territory when your driver is part of rock history.Many fine moments on this release.You would expect excellent instrumentation from a band led by Cox,and they do not disappoint. When Billy sings about the Band of Gypsys and the fun they had it put a huge smile on this old fan’s face.Long Live The Spirit and I’ am thankful for this new album Billy Cox!!!! (by Wozzy Wozzman) 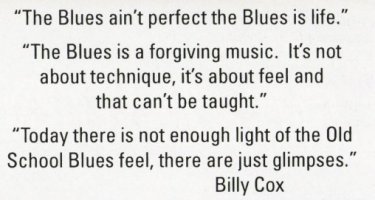