Jesse Edwin Davis (September 21, 1944 – June 22, 1988) was a Native American guitarist. He was well regarded as a session artist and solo performer, was a member of Taj Mahal’s backing band and played with musicians such as Eric Clapton, John Lennon, and George Harrison. In 2018, Davis was posthumously inducted into the Native American Music Hall of Fame at the 18th Annual Native American Music Awards.

Davis was born in Norman, Oklahoma. He was the son of Jesse Edwin (Bus) Davis II, whose ancestry was a blend of Comanche, Seminole, and Muscogee (Creek), and Vivian Mae (Bea) Saunkeah, a Kiowa. His father was an accomplished painter in the Flatstyle Southern Plains painting; his works were exhibited in the state capitol in Oklahoma City. 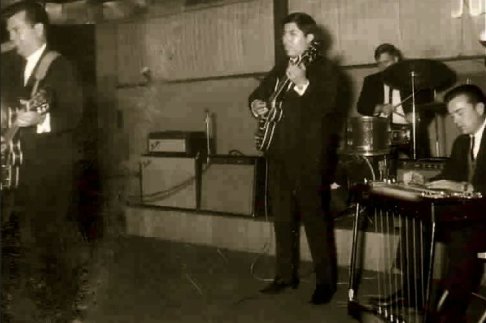 He graduated from Northeast High School in 1962. Davis graduated with a degree in English literature from the University of Oklahoma; even into his later years, he was remembered to enjoy quoting Socrates and Plato. By the mid-1960s, he had quit school and went touring with Conway Twitty.

Davis eventually moved to California. For eight years, he lived in Marina del Rey with his companion, Patti Daley, and her son, Billy. Through his friendship with Levon Helm, he became friends with Leon Russell, who introduced him to recording session work.

Davis joined Taj Mahal and played guitar and piano on Mahal’s first four albums. He played slide, lead and rhythm, country and even jazz during his three-year stint with Mahal. Mahal and his band were invited to England by the Rolling Stones, and they appeared as a musical guest in The Rolling Stones Rock and Roll Circus. 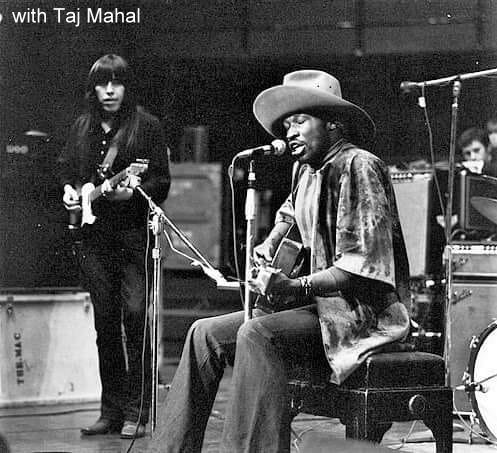 He played in the “electric” disc of Mahal’s double album Giant Step/De Ole Folks at Home (1969) and appeared in two songs of his fourth album Happy Just to Be Like I Am (1971).

In 1970, he played on and produced Roger Tillison’s only album for Atco Records, a division of Atlantic. Davis and Tillison − both Oklahoman − were joined at the Record Plant by Bobby Bruce (fiddle), Larry Knechtel (organ and harmonica), Stan Szelest (piano); Billy Rich (bass); Jim Keltner (drums) and Sandy Konikoff (percussion); Don Preston and Joey Cooper were vocal accompanists. Roger Tillison’s Album was recorded live. It was finally released on CD by Wounded Bird Records in 2008, with Davis playing electric guitar, bottleneck (slide) guitar and banjo. The Woody Guthrie song “Old Cracked Looking Glass” has become a standard for Oklahoma bands. 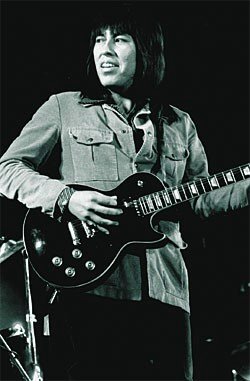 In 1971, Davis recorded his first solo album after Atco Records signed a contract with him to record two albums with the label. The first was the album ¡Jesse Davis! (1971), which featured backing vocals by Gram Parsons and performances by Leon Russell and Eric Clapton, among others.[16]

Davis was close friends with Gene Clark. In 1971, he played on and produced Clark’s second solo album, White Light, and provided lead guitar on Clark’s album No Other in 1974. On Jackson Browne’s 1972 debut album, Davis played the electric guitar solo on Browne’s hit song “Doctor, My Eyes”.

After guesting with Russell on Bob Dylan’s 1971 single “Watching the River Flow”, and collaborating in Albert King’s Lovejoy, Davis went on to work with George Harrison, performing at the ex-Beatle’s 1971 Concert for Bangladesh at Madison Square Garden, along with Ringo Starr, Billy Preston, Russell, Keltner, Clapton and others.

Two more solo albums followed: in 1972 Ululu, which included the original release of Harrison’s “Sue Me, Sue You Blues”, and in 1973 Keep Me Comin, occasionally listed as Keep On Coming. Around this time, Davis began playing with John Lennon, for whom he played lead guitar on the albums Walls and Bridges (1974) and Rock ‘n’ Roll (1975). In addition, Davis was a guest performer on other albums by former Beatles: Harrison’s Extra Texture (1975) and Starr’s Goodnight Vienna (1974) and Ringo’s Rotogravure (1976).

In the late summer and fall of 1975, he performed with the Faces as second guitarist throughout their final US tour. It was on this tour that Davis became addicted to drugs.

In 1977, Davis moved to Hawaii. In 1981, he returned to Los Angeles broke and ravaged by drug and alcohol addiction.[8] In and out of clinics, Davis disappeared from the music industry for a time, spending much of the 1980s dealing with alcohol and drug addiction. In 1985 he formed and played in the Graffiti Band, which coupled his music with the poetry of the Native American activist John Trudell (American Indian Movement). The result of this collaboration was the album, released initially only on cassette, called “AKA Grafitti Man”, which Bob Dylan called the best album of the year. 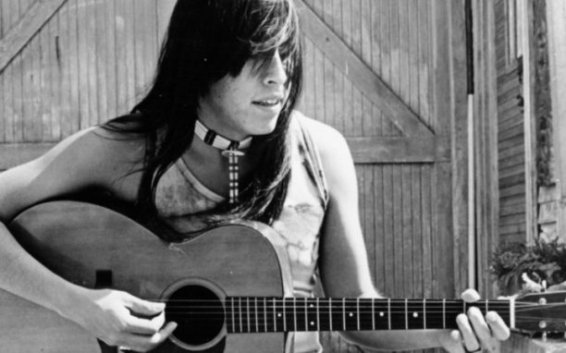 In the spring of 1987, the Graffiti Band performed with Taj Mahal at the Palomino Club in North Hollywood, California. At this show, George Harrison, Bob Dylan and John Fogerty got up from the audience to join Davis and Mahal in an unrehearsed set which included Fogerty’s “Proud Mary” and Dylan’s “Watching the River Flow”, as well as classics such as “Blue Suede Shoes”, “Peggy Sue”, “Honey Don’t”, “Matchbox” and “Gone, Gone, Gone”.

Davis had a relationship with Patti Daley for about ten years. Then he married twice, first to Tantalayo Saenz and then Kelly Brady.

In his last years, he served as drug and alcohol counselor at the American Indian Free Clinic in Long Beach.

Davis collapsed in the laundry room of an apartment building and was pronounced dead in Venice, California, on June 22, 1988. Police stated his death appeared to be the result of a drug overdose. Davis had a fresh needle mark on one arm and burned matches and tin foil were scattered on the ground nearby. He was 43 years old.

In 2002, he was posthumously inducted into the Oklahoma Jazz Hall of Fame.

In 2018, Jesse Ed Davis was inducted into the Native American Music Hall of Fame at the 18th Annual Native American Music Awards. A performance tribute was held by his former Graffiti band members, Mark Shark and Quiltman. His cousins Richenda Davis Bates and Constance Davis Carter accepted the induction (wikipedia) 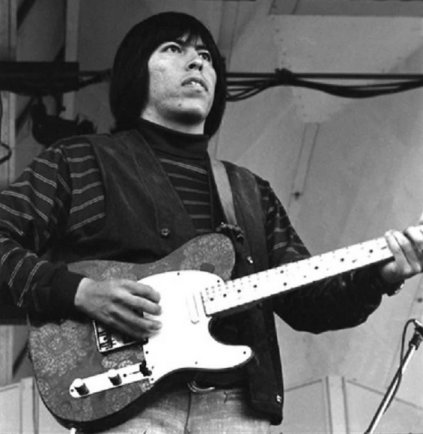 Though this album is far more a collector’s record than an actual “turntable staple,” it is a significant improvement from Davis’ first solo outing. During the title track in particular, as well as a cover of Merle Haggard’s “White Line Fever,” Davis’ voice achieves a ragged glory that makes the listener realize why sloppy rock & roll can be so much fun. Other standout moments include a version of the tune that Davis co-wrote with Taj Mahal, “Further on Down the Road,” and the Davis-penned “Reno St. Incident.” In all, it is the fun record that you would expect from a standout session player like Davis. (by Steve Kurutz)

This is the most underrated album by critics, including Jesse Ed Davis himself. But come on, George Harrison, Taj Mahal, Leon Russell, Robbie Robertson, Levon Helms, Dr John and many others contribution to this album make it stellar! JED’s vocals and songwriting are fantastic. Whit Line Fever is a Merle Haggard cover. Further Down the Road was a co-write with JED & Taj Mahal. Sue Me Sue You Blues was a George Harrison original. My Captain & Make A Joyful Noise are Gospel in nature. Ululu is a love song that may have deeper meanings as maybe Alcatraz too with JED’s Native heritage. Strawberry Wine is a Robbie Robertson (The Band) song. Red Dirt Boogie Brother seems to be JED’s autobiography song. This is just a great album with a stellar cast of JED’s true friends that pitched in to help him produce his second album. (John Wayne) 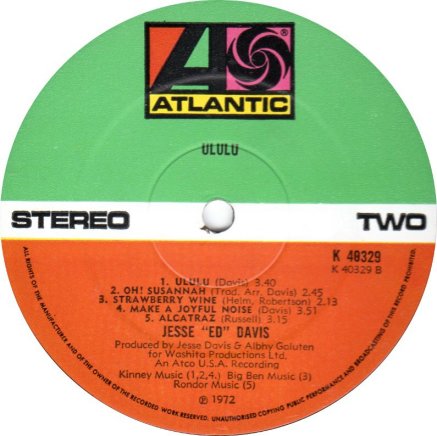