For a musicians who is used to working as a side man, the Spencer Davis Band experience comes as a pleasant surprise: Instead of being told exactly what to play by the star of the show, any band member finds that he is a star of the show as well.

The circumstances in which the music on this recording envovled are a perfect example of Spencer´s “everybody is star” approach. In thirty-five days we performed in twenty-eight cities in Germany, Austria and Switzerland. We then spent some days in a very fine studio outside Freiburg im Breisgau, recording material we´d been doing on stage plus a few things prepared just for these recording sessions.

The result is a very special for us all: five weeks of twenty-four hours a day “Rock N Roll Living”, captured in digital stereo (no overdubs) (ny Bobby Crew, taken from the liner notes)

In other words: This is one of the best Spencer Daivs album after his great albums from the 60´s  … Perfect L.A. rock … from the Eighties … listen, listen, listen ! 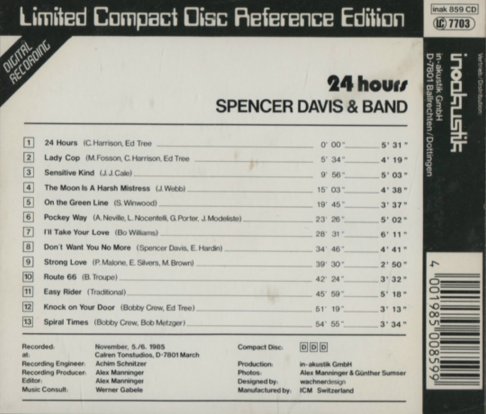 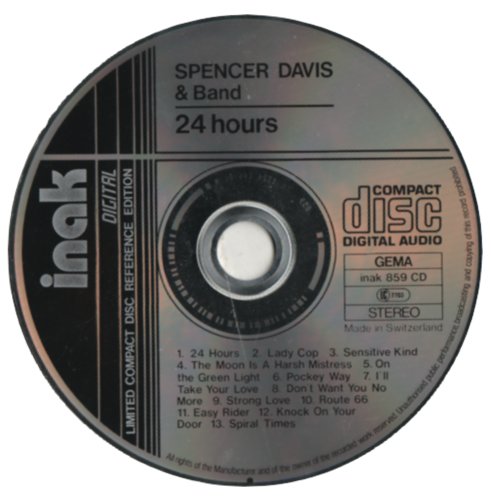 By ’68, a new version that had Walsh and his brother Rick, bassist Jim Milne, Tanti, and Dave Woodward became the house band at Grossman’s Tavern. But after a couple of years, they outgrew the nest and flew the coop.They doubled the horns attack by adding Ron Jacobs, and their gigs across Canada and into the Chicago and Detroit areas became more frequent.

They released their independent debut, BOOTLEG, in 1971, starting a career of albums that traditionally featured a few originals mixed in with covers, such as their copies of Taj Mahal’s “Change My Way of Livin'” and Jimmie Rogers’ “That’s All Right.”

After signing with GRT Records, their first single was “Flip Flop Fly” from their sophomore album in ’73, STRAIGHT UP. The song spent time in the top 40 pop list, and made them the first homegrown blues act with a gold single, (50,000 copies). As they continued a relentless tour schedule on both sides of the border for the next few years, and the Walsh Brothers’ “I’ve Got Everything I Need (Almost)” was released as the second single,” also spending time in the top 40. Also included was “Shotgun Blues,” another tune pegged by the Walsh Brothers, which would be covered later by The Blues Brothers during their movie and subsequent soundtrack.

They added Jane Vasey and Tony Flaim replaced Rick Walsh for the next album, 1974’s DANCING. Vasey was a classically trained pianist converted into a boogie woogie rockin’ machine. Walsh’s instantly recognizeable raspy textured vocals soon became trademark, such as in the Elmore James cover, “Madison Blues” and Otis Spann’s “Must Have Been The Devil.”

With new drummer Bill Bryans, next up was READY TO GO a year later, which featured the top 40 single, “Old Ma Bell.” Other tracks like the covers of Andy Kim’s “Rock Me Baby” and BB King’s “Caledonia” showcased the band’s versatility as they became mainstays across Canada, and regulars throughout the New Orleans, Kansas City, and St. Louis scenes.

But the rigours of touring and recording got the best of the band, and taking a break turned into a full-fledged breakup by 1977. While SO FAR; A COLLECTION OF OUR BEST, the first of what would become several compilation albums, was released, Walsh was out doing his own thing, and as a favour to friend Dan Ackroyd, helped The Blues Brothers by writing a pair of tracks for the BRIEFCASE FULL OF BLUES album in ’78. The other members were also out doing other projects, and Woodward moved to the west coast and joined Powder Blues.

That same year, Walsh reunited with Vasey and Flaim, along with Gary Kendall on bass, drummer Frank Russell, and Tony Rondolone on sax. After signing a deal with Attic Records, they released a pair of albums in 1980 – WE DELIVER and ROAD FEVER. Both produced hits, with Vasey’s “Tryin’ To Keep Her 88s Straight” and “I’ve Been A Fool.”

They streamlined their name to just ‘Downchild,’ and hooked up with legendary artist Spencer Davis for 1981’s BLOOD RUN HOT. their first album after shortening their name to just ‘Downchild.’ Along with the title track and “Hey Hey Little Girl” released as singles, the band had also picked up the touring schedule to include most major blues festivals throughout Canada and the US, as well as studio accolodates from the critics for their choice in covers, like Eddie Cochran’s “Summertime Blues,” “Natural Ball” by Albert King, and Sonny Boy Williamson’s “Nine Below Zero.”

And this is their album with Spencer Davis as the producer. Not the best album by the Downchild Blues Band, but a pretty fine album including powerful blues-rock. Listen to the titeltrack and you´ll know what I mean.

A 1984 performance in Germany by Spencer Davis, reunited with his former drummer Pete York and with bassist extraordinaire Colin Hodgkinson. “Live Together” isn’t an especially accomplished Spencer Davis live recording, but it’s a very affable one: Pete York banters with his audience in German throughout the set, and it’s clear that everyone’s enjoying themselves. Hodgkinson’s finest bass work has always been in his blues covers, and it’s shown to fine effect here in “Walking Blues” and “Sliding Delta Blues”; Davis himself turns in some tasteful guitar work in a pensive rendition of “Trouble in Mind.” But the undeniable highlight is “I’m a Man.” It’s a hard one to go wrong with by any band, as it’s a song simply incapable of not being rousing when played live. Still, Davis’s washes of electric guitar and the insistent pounding by York make this version particularly worthy. (by Paul Collins)

This was the first CD – as far as I remember –  I ever bought. Inak Records released a viny edition, too, but the viny edition included not all songs from this great concert (listen to one of the finest bass player in the world: Colin Hodgkinson !). 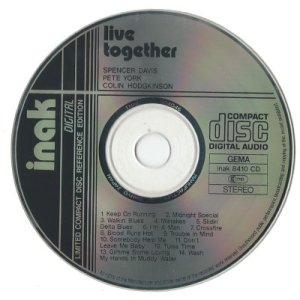