There’s never been any such thing as a bad or boring Up Bustle & Out album, but it was probably inevitable that they would one day produce one that was slightly less than thrilling. There’s absolutely nothing wrong with Istanbul’s Secrets — it’s full of the funky and jazzy international grooves that have made this group a legend among fans of cutting-edge multiculti dance music, and turning its attention toward the ancient cultural crossroads of Istanbul, Turkey, was a perfect move. But there’s just a little something missing. It’s not apparent at first (“River Song” and “Ben Seni Sevdugumi,” which open the album, are both more fun than a barrel of houris), but on “Breaking Codes” and “Giden Gitti” the musical elements seem to add up to something less than the sum of their parts. Even when things are less than spectacular, though, they’re still lots of fun — the blend of flamenco and Middle Eastern elements on “Giden Gitti” is very attractive, and “Orthodox Gold” builds up a simmering North African hip-hop groove, complete with sharp Arabic rapping by MC Sultana and even a nice beatbox interlude. (Throughout the album, Portishead bassist Jim Barr and singer Sevval Sam make excellent contributions.) Established fans will find plenty to enjoy on this generous program, and newcomers will be encouraged to explore deeper into the group’s catalog. Recommended overall. (by Rick Anderson) 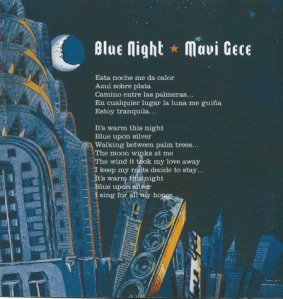