Alton Nehemiah Ellis OD (1 September 1938 – 10 October 2008) was a Jamaican vocalist. One of the innovators of rocksteady who was given the informal title “Godfather of Rocksteady”. In 2006, he was inducted into the International Reggae And World Music Awards Hall Of Fame.

Born Alton Nehemiah Ellis in Trench Town, Kingston, Jamaica. Ellis was raised within a musical family and learned to play the piano at a young age. He attended Ebeneezer and Boys’ Town schools, where he excelled in both music and sport. While at Boys’ Town Ellis performed as a dancer (in a duo) in the first show that a school director called Mr Bailey had organized for Vere Johns who had been invited down to talent scout. He would later compete on Vere Johns’ Opportunity Hour. After winning some competitions, he switched to singing, starting his career in 1959 as part of the duo Alton & Eddy with Eddy Parkins.

Ellis and Parkins recorded for Coxsone Dodd at Studio One, initially in the R&B style, having a hit in 1960 with “Muriel” (from Dodd’s first commercially-oriented recording session at Federal studios), a song Ellis had written whilst working as a labourer on a building site. This initial success was followed by the release of “My Heaven” which like “Muriel” was a slow R&B ballad with the instrumental triplets and vocal harmonizing common to the ballads of that period. Further releases in the R&B style followed: “Lullabye Angel”, “I Know It All”, “I’m Never Gonna Cry” and “Yours”. The duo also recorded R&B tracks for Vincent Chin’s Randy’s label including “Let Me Dream”. The duo split after Parkins won a major talent contest and moved to the United States.[10] Ellis remained in Kingston, working as a printer and after losing his job, he restarted his music career, initially forming a new duo with John Holt. When Holt joined The Paragons, Ellis formed a new group, The Flames. Ellis continued to work for Dodd and also recorded for his arch-rival, Duke Reid on his Treasure Isle label. At the start of his career Ellis recorded with his younger sister Hortense; early tracks with Hortense like “Don’t Gamble With Love” (1965) were still in the R&B style.

By the mid-1960s, ska was moving on and the beat was slowing down to rocksteady and becoming associated with the violent rude boy subculture in Jamaican dancehalls. Many artists made records referring to the rude boys, including Ellis, although his records were consistently anti-rudie, including “Don’t Trouble People”, “Dance Crasher”, and “Cry Tough”. Releasing records under the name Alton Ellis and The Flames (the varying line-up of which included his brother Leslie Ellis, David “Baby G” Gordon and Winston Jarrett); the group had hits with “Girl I’ve Got a Date” and “Cry Tough”. The release of “Rock Steady” (1967) backed by Tommy McCook and the Supersonics, the first song to refer to the name of the new genre, heralded the new direction Jamaican popular music was taking. Ellis continued to have hits for Treasure Isle; working with artists such as Lloyd Charmers, Phyllis Dillon and The Heptones. His Mr Soul of Jamaica album (with Tommy McCook and the Supersonics) is regarded as one of the definitive rocksteady albums.

Ellis toured the United Kingdom in the 1967 with Ken Boothe and Studio One session band the Soul Vendors and on his return to Jamaica he worked with Dodd, recording the tracks that would be released as his debut album Alton Ellis Sings Rock & Soul.(by wikipedia)

This is a realy strong album: A perfect mix between Soul, Rock, R&B plus Reggae !!! And you´ll nice versions of classics like “Massachusetts” and “A Whiter Shade Of Pale” … 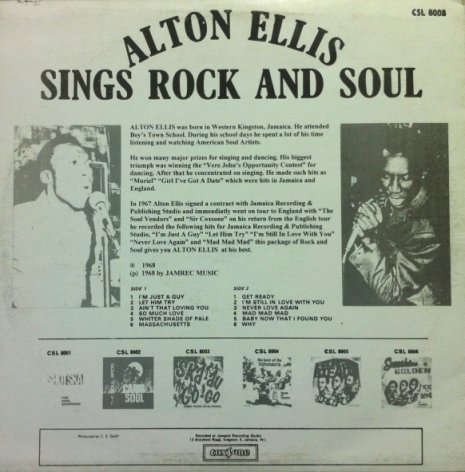