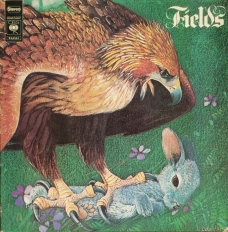 Fields was a progressive rock band formed in 1971 by Andrew McCulloch and Graham Field, and also containing Alan Barry. McCulloch had previously been a member of King Crimson, but left due to musical differences. Field had founded Rare Bird, and Barry was a member of Dowlands with Giles Brothers (1962-1963).
They only recorded one eponymous album in 1971, and one single from the album, “A Friend of Mine”, in 1973. According to Field, CBS management changed and “the new faces did not want to know us”, so the group disbanded. Field had the rights to the name Rare Bird, and returned to working in that area and in television themes. McCulloch went on to become a founder member of Greenslade. Barry went on to become a founder member of King Harry.

A trio formed from diverse musicians from other groups such as KING CRIMSON and RARE BIRD, which managed one sole album. FIELDS is named after Graham Field, founding member of RARE BIRD and was responsible for many of the better tracks of the first two albums. After his departure RARE BIRD will change sound rather drastically veering towards a faster tempo rock with funky grooves. As for FIELDS, this is a keyboard-led trio with bassist Alan Barry singing but also playing guitars (although very discreet) but also adding some Mellotron lines. Rounding up that trio is Andy Mc McCullough who had played on KC’s “Lizard” album and we will find him holding the drums stool for GREENSLADE later that year.
RARE BIRD fans and 70’s prog completist will enjoy FIELDS. (by Hugues Chantraine)
Quickly, Fields was Rare Bird’s main keyboard man Graham Field’s first (last?) post-Bird project. Bringing at least a little of the early Rare Bird vibe along for the ride, albeit with one keyboardist rather than two, bassist/guitarist/composer/vocalist Alan Barry and drummer Andy McCulloch (between stints in Crimson and Greenslade) shore up the incredibly full sound for a very unique and melodic prog album.
Field and McCulloch shine like you’d expect, but it’s Barry who impresses the most here. His pitch-perfect tenor sails over all these great songs and provides a real nice mechanism for exploiting these beautiful melodies. I’d love to know whatever became of Alan Barry after such a powerful performance here. Barry’s previous stints as session man for Gordon Haskell’s It Is and It Isn’t album and as part of one the Giles brothers’ pre-GG&F bands are pretty much all I can find on this guy’s skimpy resume.
Like another well known keyboard-based 3-piece band, Refugee, Fields only managed this one album before imploding. It’s been long out of print but worthy of a search for all keyboard-obsessed melodic, yet heavy prog nuts out there – you know who you are! (by Steven)